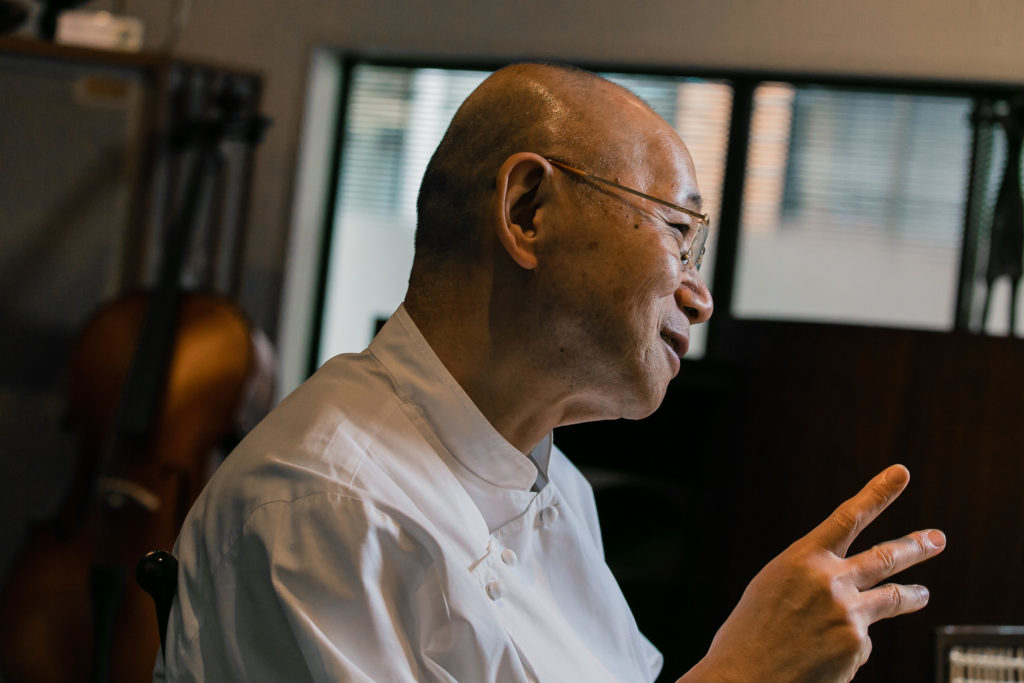 With the mind of “learning more and more” – trying to be humble even in management.

Was there any reason to come back from your second training in France?

Mr. Nishihara:
My son was four years old back then, and I had been thinking all the time to have him enter Japanese elementary school.

I stayed in France for two years, and Mr. Chapel begged me to remain in France and to be the first Japanese to earn the MOF award. But to do so I had to stay in France for five years.

Back then the plan of Alain Chapel Tokyo was in process, so he told me to go there.
We had a conversation where I responded, “Of course!” Unfortunately it did not come true.

After coming back to Japan, I worked for the opening of a hotel in Kobe.
Through the reference of Mr. Chapel I was given an offer by Monsieur Ono (Mr. Masakichi Ono).

I was welcomed into the second management position for sweets in the hotel.
Management usually wears black pants, but I wore white ones on purpose and tried to act the same as other staff members. Even after my return I did not lose the style and mind of “I am learning more and more.”

Were there any interesting episodes back then?

Mr. Nishihara:
Back then I had my own self-evaluation that was, “My value as a patissier is about this much so I deserve to receive this much in salary.” Of course the price was not too high.
Reflecting it on the market price, I set it fairly, also thinking about making enough for my family to live.

The price offered when I was hired by the hotel was way below that.
I thought it was too low.

So I went to talk with the person in the human resources department to rethink it.
Then it turned out to be a big issue for negotiating salary. “This guy, Nishihara, is saying this kind of stuff…”

At first Monsieur Ono was angry about me negotiating the salary.
But when he asked, “So how much did he request?” and heard the requested price, he replied, “With that amount, what Nishihara is saying is right!” So that time he got really mad at the hotel.

As a result I got a call quickly and was able to receive more than I requested.

It is good to give it a shot.

Mr. Nishihara:
Yes, but because of that I was treated as a maverick!

To them I was a guy coming back from France who used to work at Alain Chapel and complained that the salary was too low, so I suppose they were cautious.
I understood myself as having an “interesting history,” so I decided not to be bossy but to be humble. That thing about my pants also came from that place.
There were some things like that but in this hotel I worked for two years.

Monsieur Ono told me that I would be the manager of the sweets section.
But actually I happened to seek another path. When I started thinking about choices for the next stage, Mr. Chapel passed away.

There was a plan of opening Alain Chapel in Tokyo and having me as a chef patissier, and I was aware of that.

And Mr. Jacques Borie (*5) told me, “Mr. Chapel has passed away, but if you were willing to come to Tokyo, why don’t you work with me?”

And then I worked at Shiseido Parlor (*6) for seven years.

*5: Jacques Borie
Came to Japan in 1973 and was involved in opening L’Osier. He received three Michelin stars as well as the MOF and L’ordre National du Merite awards and plays an active role as an executive producer of Shiseido Parlor.

*6: Subsidiary of Shiseido, which manages diners and cafes as well as selling sweets.

My meeting with Mr. Borie was at the culinary fair collaborated on by Joel Robuchon (*7) and
Alain Chapel. Then I met Mr. Borie, who was a chef of L’Osier, and we became close.

*7: Joel Robuchon
Has earned stars all around the world and is known as the chef with the most stars in the world.
He has done many activities outside of France, especially in Japan, and the influence he brought to the field of French cuisine in Japan is also big. 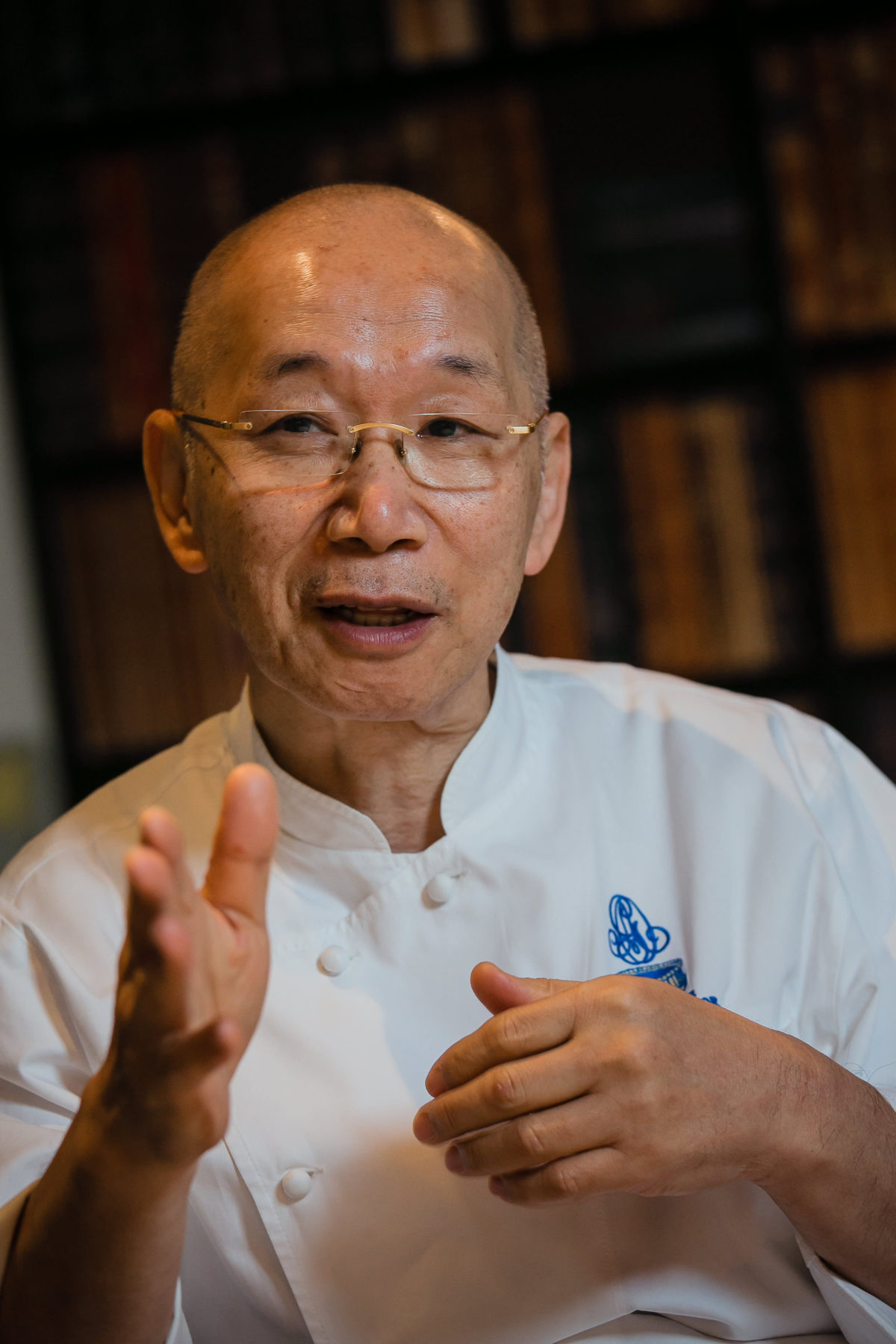 New challenge at Shiseido Parlor: the mission was, “Play hard.”

So you moved to the new place, Tokyo.

Mr. Nishihara:
Yes, I was invited by Mr. Borie and happened to work as a chef in charge of desserts at L’Osier of Shiseido Parlor.

At Shiseido Parlor, I was not a full-time employee but a contract employee. I got cut if the outcome was not good, but considering that, the salary was very good.
And to me it was a positive experience to work under that kind of pressure.

I was improving the store more and more, thinking I wanted to make it better and make customers happier. Moreover the great thing at Shiseido Parlor was that there was an environment to let me do so.

The president of Shiseido Parlor back then was a man who knew a lot about French sweets who just came back from the French branch.
He was a guy who loved sweets and often came to the kitchen.
I knew that so I served him saying, “Boss, could you try the sweets that I am going to serve next?”
So we were very close.

By that kind of history I was able to develop the business, having him as a person who understood me.

He said, “Mr. Nishihara, please play hard,” and let me do the renovation of the kitchen and the store.

I think it takes a lot of money, but what was the reason that he was happy to let you do that?

Mr. Nishihara:
That was because the timing was good.

Back then the sweets of Shiseido Parlor was not known at all, but he had in his mind that he wanted to make the first floor of the building of Shiseido Parlor to be where famous stores like Wako and Lecrin could be the hot topic and catch the attention of women.

I was very lucky. I was given a chance to stand on the stage of this historical theater called Shiseido Parlor, by myself, and do whatever I wanted to do in front of customers.

At Shiseido parlor I was able to gain experience which ordinary patissiers cannot really have.

What kind of experience is that?

Mr. Nishihara:
There was this promotion project by a designer of Shiseido, a writer, a cameraman, and myself, and it was to make one bridge out of sweets every month.
To me it was my first time to work with professionals in other fields so it was tough but at the same time was sensational and fun.

There were many things happened. On the stage of Shiseido Parlor I think I was allowed to bloom really.

Why did you resign from Shiseido Parlor?

Mr. Nishihara:
So the renovation of Ginza branch, the temporary closing of L’Osier, and my child moving from elementary to junior high school were at the same time.

Back then I had it in mind to return to Okayama and open a shop there also.
After the closing of Shiseido Parlor as a preparation period of going back to Okayama, I worked as an advisor for the patisserie section of Troisgros for about a year and a half.
But this plan was changed and in the end I happened to open a shop in Kyoto.