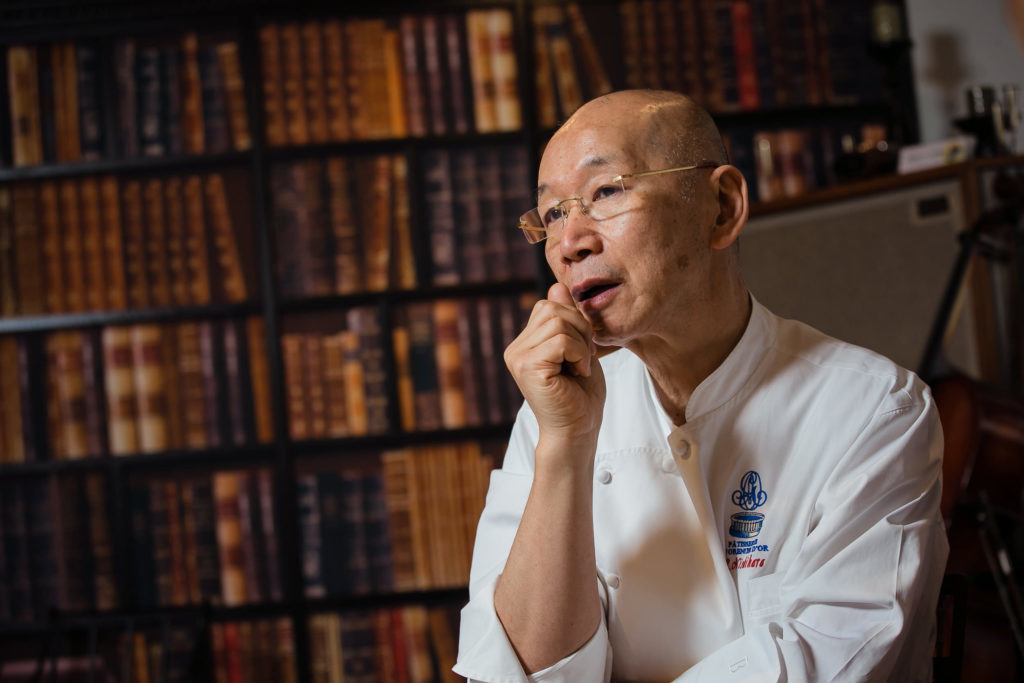 How was the Alain Chapel that you had admired?

Mr. Nishihara:
Well, suddenly there came a situation where I had to leave after just two or three months.
Actually it was a reason from the company, not having to do with me.
It is unbelievable when I think about it now.

I was feeling very sorry, but I thought it cannot be helped.
And right before I resigned, I got information that Mr. Alain Chapel would come to do a fair at Portpia Hotel.

Mr. Alain Chapel, who I had admired, would come. I wanted to see him anyhow, so I asked them to let me stay there until the fair was over.

And as a result you were able to see Mr. Alain Chapel.

Mr. Nishihara:
Yes. Even though I could only speak a little French, on the day I was thinking about showing myself off to him.

But it was like facing a wall. In the culinary field of France, it was a vertically structured society like seniors and juniors system. So they do not treat my kind of lower people well.
I prepared and acted as I planned, but he did not even see.
He did not even try to see it.

But he seemed to look at how the customers react and evaluated what I made.

And in the evening of that day. when I started preparation, I felt someone was looking at me and turned, and it was Mr. Chapel standing there. He told me to let him try everything that I served in the afternoon.

He tried and went, “This is bad. This is good.” and judged one after another.
It was around four in the afternoon. Customers were still coming at six but he told me to take away the ones he said “no” to and told me to make different things. Moreover there was no direction on what to make. It was like I decided what to make.

I did not have time anyway, so I did what I could do within the time.
And I went to show him what I made, but he did not react much.

And on the next day he tried sweets from the last night and did the same thing.

Thinking of it now, I think he was testing my ability.

After that I noticed when I was working with Mr. Chapel, but it is very important to perform well in the situation of no time. Probably he was checking that point.

Three days before the end of the fair I told him for the first time, “I wanted to continue working here, but I have to resign due to the situation of the company.” And I told him about my personal situation. Then he responded with, “I got it.”

The next day I got a call from the manager of the human resources department.
“Mr. Nishihara, I have told you that it was difficult to accept you before, but could you be a full-time employee?”

That was really a welcome call.

Mr. Nishihara:
I was saved by the words of Mr. Chapel and able to get the work I hoped for, and proper salary.

Mr. Chapel came to Japan twice a year and held events, and I had a thought of giving him back a favor, so I wanted to prepare something visible to express my gratitude in the event.

Then I made sweets taking half a year to show him at the event when he came to Japan.

Taking half a year?

Mr. Nishihara:
Yes. During the break time between lunch and evening I was making decorations.

It was the best way to express my gratitude and also I was able to brush up my skills so it was good for me, too.

On the day of the event when I showed him the decoration sweets, Mr. Chapel was very happy. For the second one he said he would take it back to France. It was not like something he could carry easily, so he put it into a specialized case and took it home, reserving an extra first-class seat.

That is amazing! You did not learn techniques of decoration sweets anywhere, right?

Mr. Nishihara:
I learned it myself. There was a book of classic French cuisine, so I saw that and made it by expanding my imagination.

And after that Mr. Chapel asked me, “Why don’t you work with me in France?”

I was not expecting anything in return, but wanted to return a favor for having me continue working there. I realized and felt that the power of gratitude towards people mysteriously returns to ourselves. 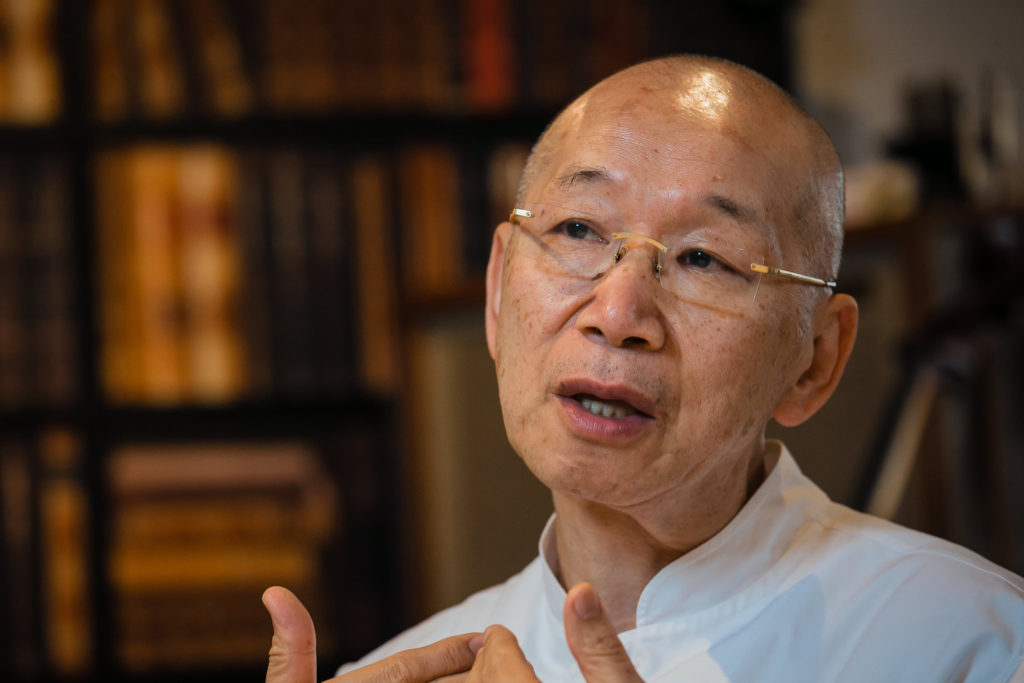 Exercising my talent on the world’s best stage of Alain Chapel as a chef patissier.

What happened after that?

Mr. Nishihara:
I was completely on fire. There was no way to reject the offer from Mr. Chapel, right?
And I also wanted to challenge myself and to widen my possibility. It was actually smoother to go to France as part of a company training, but it was difficult for the company.

Back then I already had a family and wanted to clarify my visa and income, so I wrote a letter personally saying I would love to go if I could work with the same conditions as in Japan.

I got a reply soon after and was informed that all the processes in France were done and proceed to get a visa in Japan, and feel comfortable coming with your family.

How was the main branch of Alain Chapel?

Mr. Nishihara:
Fortunately I was invited to the main branch of Alain Chapel as a chef, so I was able to work in a different position compared to my first visit to France.

I had a great experience. It was Alain Chapel, so there were offers from all over the world and invited.

I was always with Mr. Chapel as a chef patissier, so I was able to be with him in the best restaurant in the country and served his best food.

It was totally different from your first time in France!

Mr. Nishihara:
It was like skipping a grade indeed.

When I came to France for the first time. I was a servant who was really at the lowest rank.
So I even hesitated to drink a cup of coffee, and it was such a poor situation that I walked instead of taking the subway to commute.