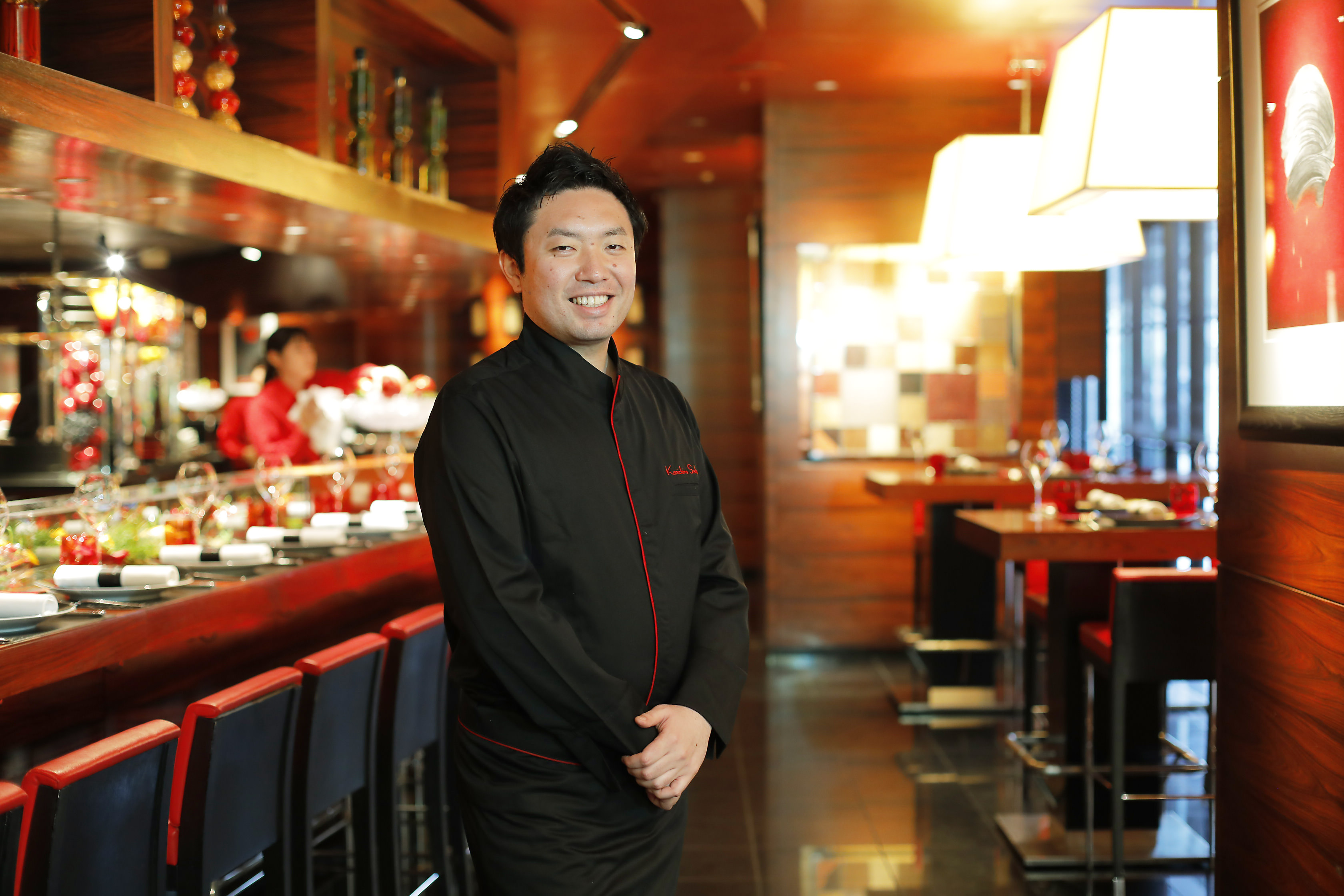 Mr. Joel Robuchon's popular restaurants are all over the world and have a lot of fans in many countries. Mr. Sekiya was the sous chef at one of Mr. Robuchon's restaurants, L'ATELIER de Joël Robuchon in Paris.  He returned to Japan when he was appointed chef of L'ATELIER de Joël Robuchon in Roppongi, Tokyo at the age of 30. It's been seven years since. In the Roppongi store, red and black colors are used for the interior and it is very impressive. There is a long counter table and an open kitchen, which plays the key role of the restaurant. You can enjoy the food while talking with the chef or service staff. I interviewed him and heard about his way of life and his future. 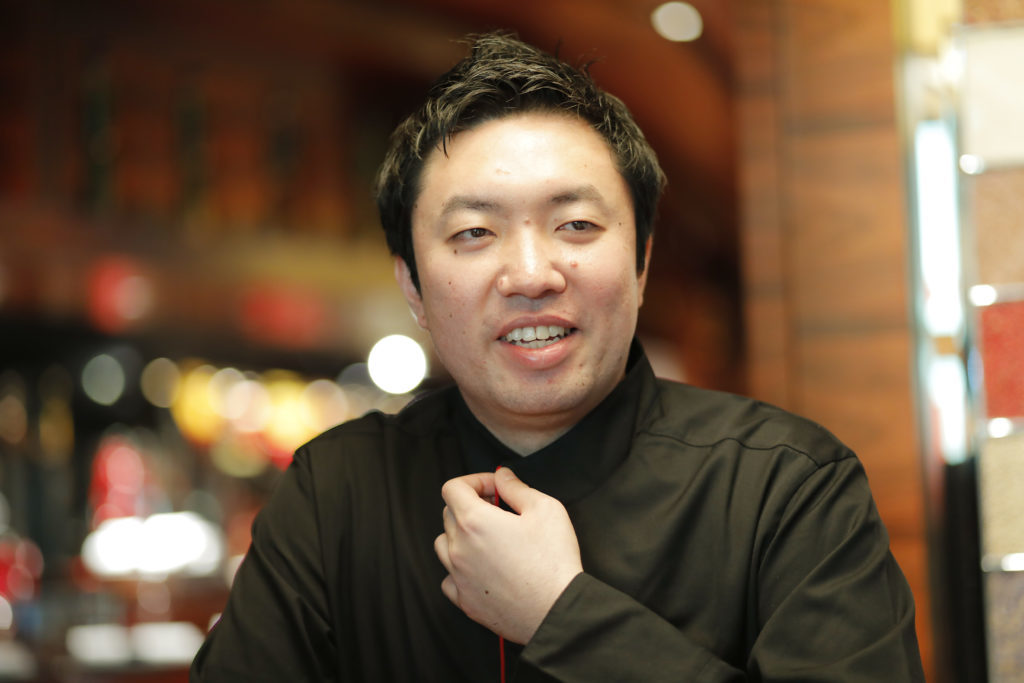 Mr. Sekiya decides to pursue his career as a chef, looking for a job he would love to do.

What made you decide to pursue your career in the food industry?

Mr. Sekiya :
I was interested in cooking ever since I was a child. I think I was affected by my mother the most. My mother loved cooking and she always made very delicious food. I liked seeing her cooking in the kitchen. I decided to pursue a career as a chef when I was in my final year of high school. I went to a high school affiliated with a university but I couldn’t think of any reason to go on to college. If I was going to spend four years without any purpose, I would want to study something I was interested in. When I thought about what I was interested in, cooking was the first idea. Therefore, I decided not to go on to university and go to a culinary college instead.

I heard that you went to a culinary college for one year; what did you do after graduating?

Mr. Sekiya :
After I studied at a culinary college in Tokyo for one year, I got a job at a hotel in Urayasu, Chiba. I was assigned to a division which arranged banquets. There were a lot of customers celebrating weddings so I experienced cooking wedding dishes and platters for sharing. After about one year had passed, I started feeling like doing something different even though I knew it was a bit brash of me thinking like that. I originally became a chef because I wanted to cook French cuisine. Therefore, I felt a huge gap between what I had imagined and the actual work at a hotel. That sense of discomfort became bigger so I decided to take a break and went to France for about ten days of travel.

How was your first experience in France?

Mr. Sekiya :
I didn’t have an ambition to study culinary arts there, and instead I just wanted to see something different. I was very shocked and fascinated by the authentic things. I visited not only Paris but Lyon. I didn’t go sightseeing that much, but did visit the restaurants I had dreamed visiting of. I traveled there just to eat. It was when I met Paul Bocuse for the first time, who sadly passed away recently. During this holiday, my ambition toward French cuisine became stronger. I started feeling “I would like to go to France and I will.” As a result, this experiencec made me decide to move to France.

How did you spend your days after coming back from France?

Mr. Sekiya :
From the day I came back from France until I quit the hotel, it was like I was here in body but not in spirit. I found out that I couldn’t prepare for moving to France while continuing to work. I couldn’t apply for a visa nor study the language as I would have to move to France as soon as I got a visa. I can’t even start preparing for moving but I was still 20 so there were many problems in my life. I had an ambition to go but had financial issues so I couldn’t make up my mind. In the end, it took me about one year to quit the hotel.

What kind of preparation did you do to move to France?

Mr. Sekiya :
I had about four months until I moved to France after I quit the hotel. What I did during that time was study the language. I went to the Intensive French course of a language school, Athénée Français, in Ochanomizu, Tokyo for three months. This was very intensive as the course name implies. I had classes on Monday, Wednesday and Friday from morning til evening. I needed to do a lot of review work to catch up to the rest of the class. I brought a mirror to the class and learned how to use my mouth and tongue to pronounce French better. I studied the hardest ever in my whole life. I am not exaggerating; I seriously did! However, I started falling behind in classes two months later. I faced difficulties at that time. I didn’t go to school for a month. Even though I was absent a month, I improved quite a lot throughout the course. I was able to improve, especially in reading and writing. I thought I was at a quite good level. If I hadn’t improved my French language skills at that time, I wouldn’t have been able to live in France very long. Moreover, I wouldn’t have been able to manage my French co-workers and juniors. 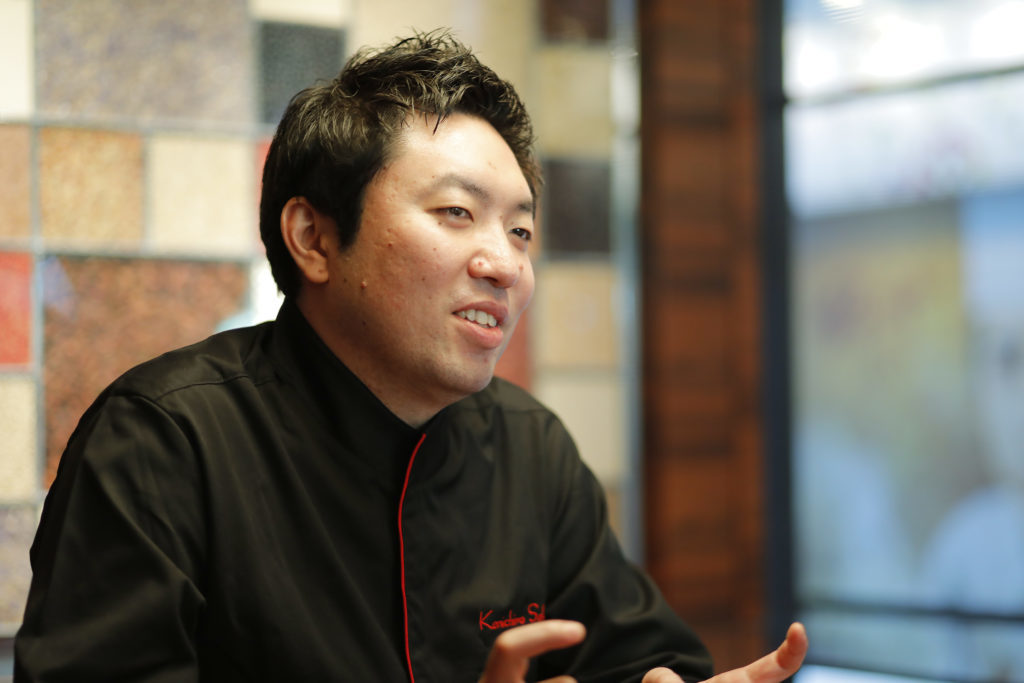 Relying on my skills for eight and a half years after moving to France.

How did you find work after arriving in France?

Mr. Sekiya :
After moving to France, I sent out my CV, letters, and called the restaurants that I dreamt of working at. I looked for work on my own. There were some job search magazines but most of the time I visited the restaurants directly to hand out my resume and a cover letter. I think not only foreign people like me but the local people also find jobs in that way. Then I often got a reply from them saying when I need to show up to the interview, so I went on the said day for the interview. That’s what the entire flow is like. It depends on the restaurant which division you are appointed to. You could tell the restaurant what kind of work you would like to do but most of the time you are told to work at whatever division has available spots. I worked at three to four different restaurants for the first three years after I moved to France. I got a lot of inspiration and impulses from these restaurants as the ingredients used were so different from what I’d seen in Japan in terms of size or taste. The characteristics of the ingredients were so different, too, and there were so many of them which I’d never used before.

What made you decide to work at L’ATELIER de Joël Robuchon in Paris?

Mr. Sekiya :
I sent out my resume to various restaurants to find the next place to work at three years after arriving in France. L’ATELIER de Joël Robuchon was one of them. I was interviewed by the chef and was hired. Actually, I was lucky enough to work at restaurants which were highly regarded all over the world. That’s why I tended to receive positive replies from them after sending them my resumes. At that time, I got positive replies from five different restaurants in addition to L’ATELIER de Joël Robuchon. I was rated most highly by L’ATELIER de Joël Robuchon and wanted to work with the chef so I decided to work there. It had just gotten a Michelin star through the new style called L’atelier and it was running on good momentum, too. I was 25 years old at that time. I was hired as a chef de partie (responsible for fish dishes). 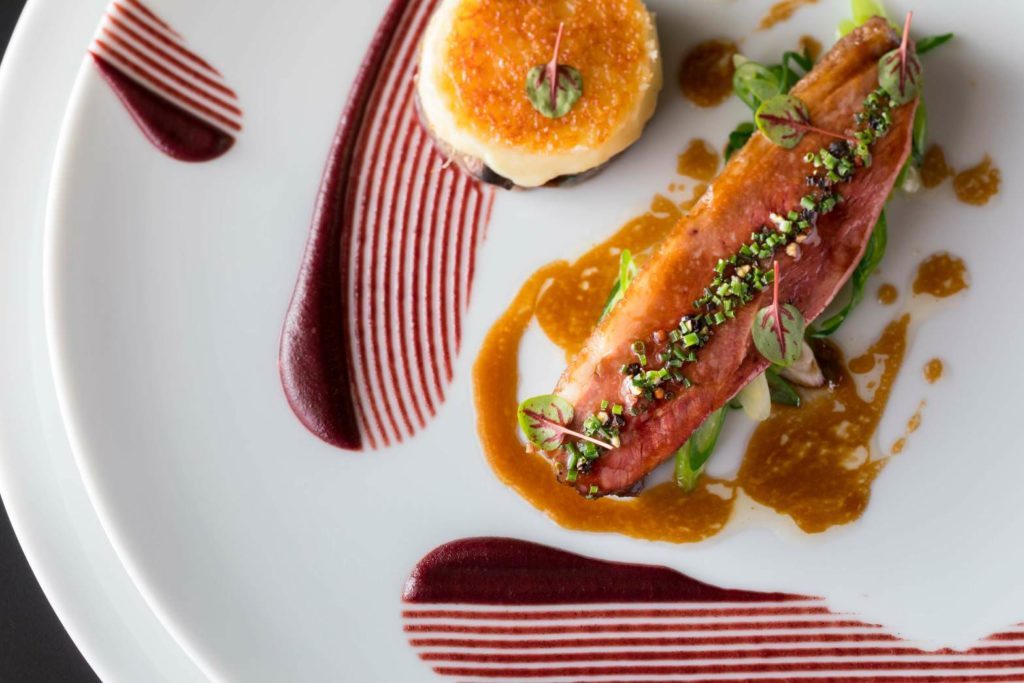 You were appointed sous chef as the age of 26, just 1 year later.

Mr. Sekiya :
The conditions you need to meet to be hired by L’ATELIER de Joël Robuchon are not related to your age, career, or the length of work as a chef. They only see your actual skills. L’ATELIER de Joël Robuchon sees your work and evaluates you on how you work. To be recognized, you need to be able to handle work precisely and do what you are told. This is your responsibility as the chef de partie. Whether you are able to manage your team or work well with the other sections is something required for the next position, and something for which I was admired.

How did you work after becoming a sous chef?

Mr. Sekiya :
L’ATELIER de Joël Robuchon has many branches overseas so there are times when the chef is not at the restaurant. In that case, I was the one who managed the rest of the staff so my responsibility was huge. It is not easy as a Japanese to become a top chef at a restaurant in Paris. It is the same as working at a first-class restaurant in Ginza or Kyoto and the head chef is French. Of course, people would not feel comfortable with the fact. Therefore, I always kept in mind that I would need to work hard to prove that I am capable.
It was not only about the cooking but also the relationship with my co-workers and juniors. They weren’t happy to be told what to do by and work under a Japanese supervisor. I knew they felt uncomfortable and jealous because I was Japanese and they didn’t believe I was capable of being in that position. Therefore, you need to have something you can always be better at than others. That means my skills. Not only cooking skills, but my communication skills are important as I needed to talk to my staff to do things. I thought the time I used in putting a lot of effort in the language study in Japan paid off. It was only two months but it was the most important two months! 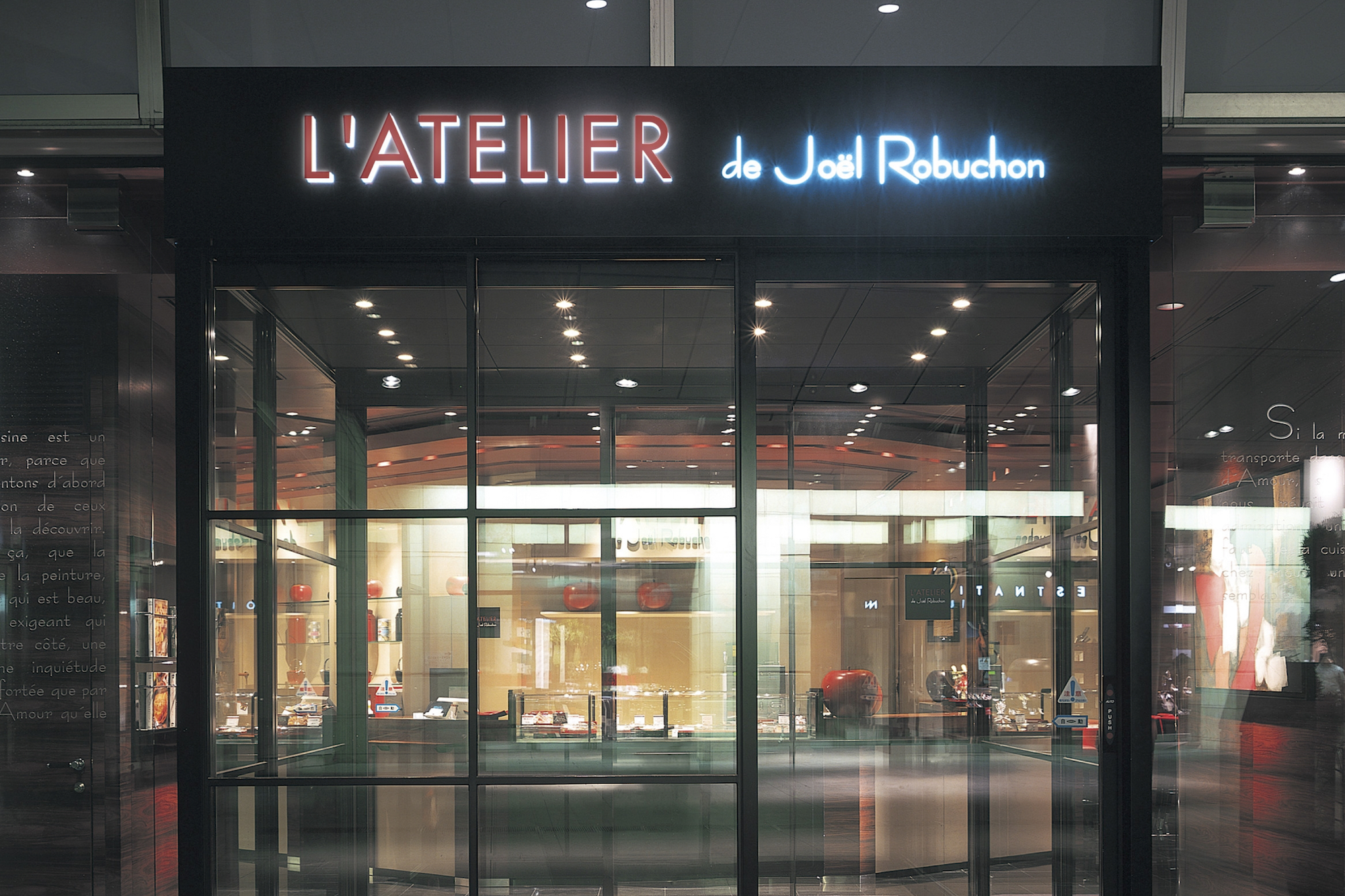