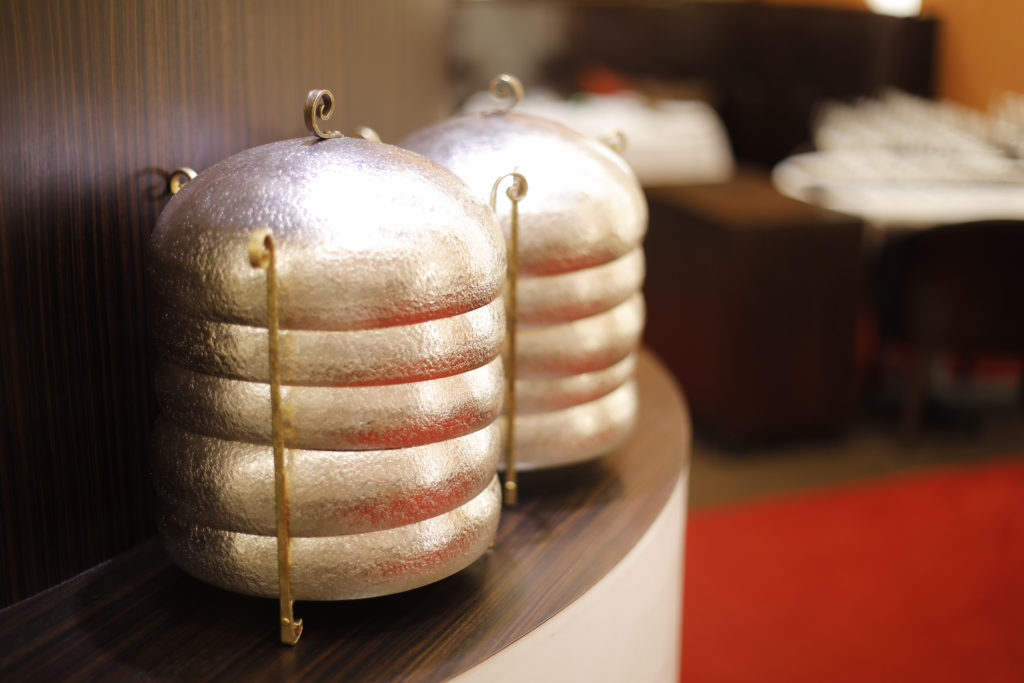 Recover the restaurant which was almost bankrupted and express the food I wanted to make.

I heard that the restaurant that you served as a chef at the end in Elsàss is already closed. What was the reason?

Mr. Sugimoto:
In the first place, it was a restaurant which was nearly bankrupted.
The building that had been through the bubble economy had become very old and even it had a capacity of 80 people at maximum, but the number of customers was always single digit everyday. It was a horrible situation that it was only about once a month that more than 25 tables were filled.

Even so by the intention of the owner to keep it well prepared, about 12 to 13 chefs were always standing by. So labor cost was way to high and sales was always red. I happened to be the part of the management in order to recover from the situation.

I suggested to at least make income and outcome even, then pile profits little by little. I set the target to fill 25 tables daily after making the capacity to 40, and on the other hand I also suggested to reduce the number of chef to one third, which was a formation of 4 chefs in order to reduce the labor cost.

Then in about 6 months it became a restaurant that 30 tables were filled and sales turned out to be black from red. If we could make a profit surely, owner was happy, so since then I was allowed to do freely.

Next, I proposed a strategy that I could serve the food that I wanted to cook more, using high-classed food materials that even one starred restaurants could not use that much like truffles and Omar Blue of Bretagne.

So It was a strategy that by setting the cost rate of only Omar Shrimp to 80%, reputation of “That restaurant serves high classed food materials at inexpensive price.” spreaded by words of mouth. That aim turned out to be correct and after a year it became a popular restaurant with consecutive full reservations.

As a result it became a brilliant restaurant in management point of view also.

Mr. Sugimoto:
And yet that restaurant closed was because of me returning to Japan and change of the owner.

Actually the owner was going to release it before, but at the time when it was nearly bankrupted, he could not find anyone who wanted to buy.
Then when my return to Japan was fixed and he tried to sell it, this time there was enough profit so deal was made within a week.
Higher than the cost price. In France the price of the restaurant is computed from the previous sales and profits. So this type of thing happens.

After that it became a new restaurant and closed after 6 months.
Selling and buying of restaurants are not unusual in France, but I feel a bit sad to lose a restaurant with memory.

When I think of it now, I feel sorry, but they held a fare well party upon my resigning. And it was written in the article of the local newspaper. May be it became one of the reasons for decrease of customers. 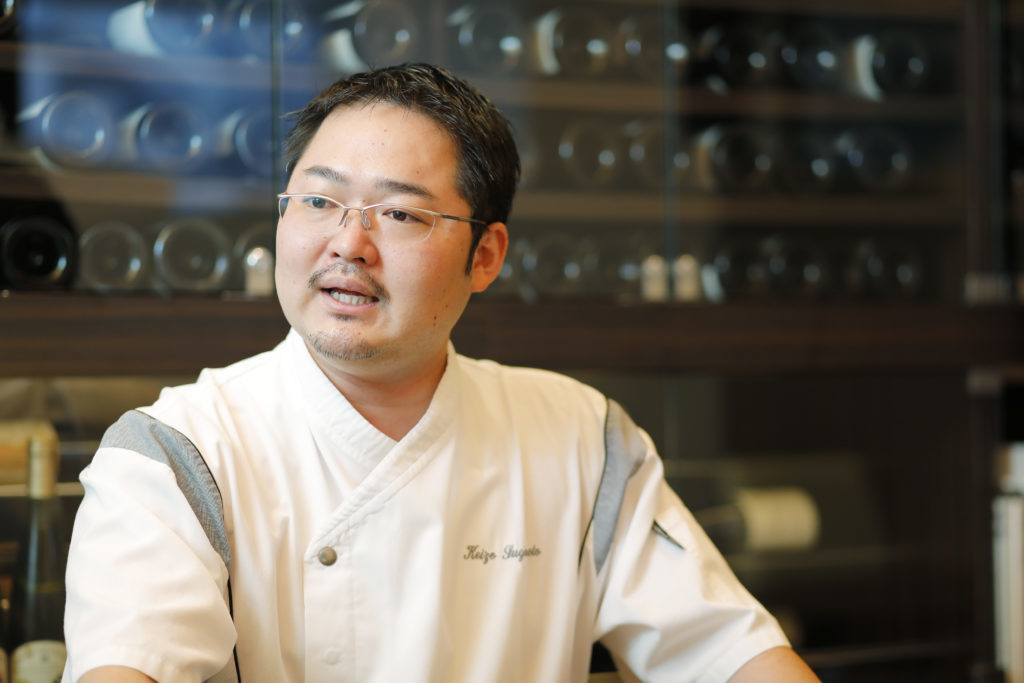 After independence, despite a struggle, attending youth cooking contest became the breakthrough.

Had you not thought about independence in France or elsewhere abroad?

Mr. Sugimoto:
I had lived in France for 12 years, so I had enough for abroad. At the restaurant of Elsàss I was able to cook my food to French people enough, and I wanted to perform in Japan.

Please tell me the reason why you chose the location of Shimbashi, Tokyo.

Mr. Sugimoto:
When I came back at the end of February, 2011 and started looking for a property, there was Great East Japan earthquake. And I found this place after settling. I had conditions in mind like distance from the nearest train station or size of the property, but one I was the most particular about was “safety”.

I judged whether there were 2 or more emergency exits that people can smoothly evacuate in disaster situations like earthquake and fire with assured and safe courses. I had thought about Ginza but it was difficult to find such property.

On the other hand I knew that Shimbashi, with an image of a busy town where there were many businessmen, was not very suited for French cuisine, but it was accessible from Tokyo station and Haneda Airport. You could reach Ginza area by waking for about several minutes and I thought it was not a bad place to host customers with many types as globalization was spreading.

It is big with 165㎡ and hall is a luxury space using many curves.

I imagined course price of 20,000 yen or more per person in order to make my French cuisine, so I concentrated on that part in space making.

For the walls it reduces a lot of constructing cost if we use more straight lines, but by having walls with indirect lights build in it on purpose and arranged a hallway in order to make the entrance far from the hall intentionally.

Like a lobby at the luxury hotel, spaces which might look unnecessary are the very things that people feel real luxrity. And I was also particular about equipment that was standard and regularized by the law in France such as having a bathroom and the plumping of the kitchen apart and having barrier free bathroom that a wheelchair could enter. So initial cost turned out to be higher than I imagined.

Was the management going smooth from the beginning of your independence?

Mr. Sugimoto:
No way!The P&L statement was a mess for the first 2 years and 20 million yen running cost was almost gone. What I realized after opening was that I was too optimistic about Japanese customers.

Even I trained in France for 12 years, I never trained in a famous restaurant. I think it was inappropriate to bring names of 3 starred restaurant which I trained or worked for just a short time, so I did put down those big names to my profile.
But Japanese customers liked brand more than I thought, and they do not really come to the restaurant of a chef that does not have careers with famous restaurants or masters.
At such time what became a breakthrough was participating a contest for young chefs called, “RED U=35”. I was right before turning 35 years old and people around me recommended me to join as it would be the last chance considering my age.

You won it and it was an event that collected attention in the field of culinary.

After that did the situation of the restaurant change?

Mr. Sugimoto:
Indeed it changed a lot. Purpose of joining at the first place was to advertising my restaurant and getting new customers so effect was more than I imagined.Also another good thing about participating the contest was that I became able to use 2 days off a week more effectively.

You have been particular about 2 days off a week though management went down.

Mr. Sugimoto:
The reason why is to do job aways from the restaurant.

I was able to grow as a chef and the main reason was activities like restaurant events that I had held from my high school time and catering. When I faced a customer one by one outside of the kitchen, hearing from customers “It was delicious.” or “Keep it up.” encouraged me a lot and I really feel that I was raised by everyone.

So even when I am on my own and have my restaurant, I think it is necessary to spare time besides serving at the restaurant for my growth in the future.

By complete 2 days off, I can participate interviews and event or going far which take time, and even now my schedule is full until about 3 months ahead. I get good inspirations and I think the width of ideas on cooking has been widened even more. 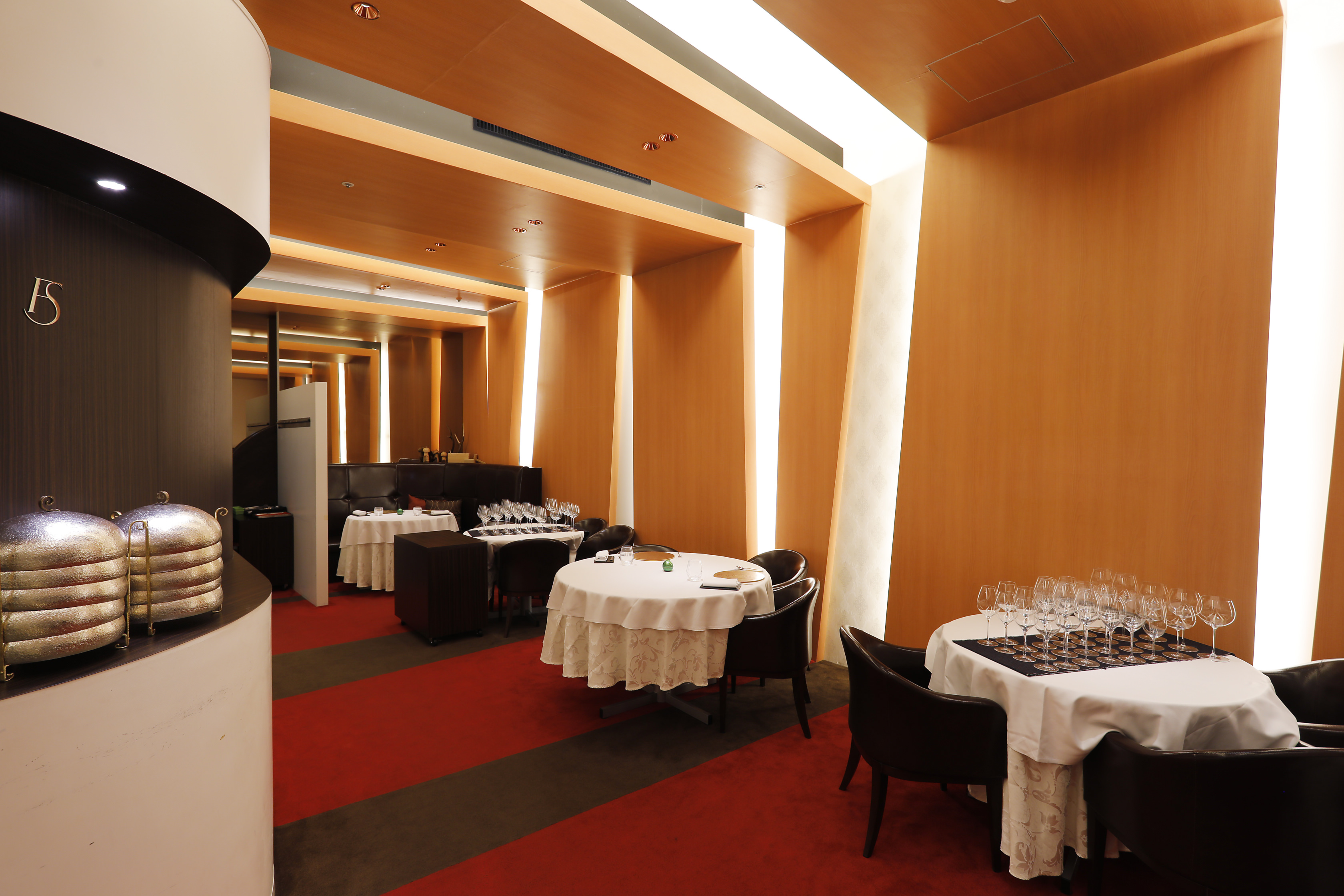