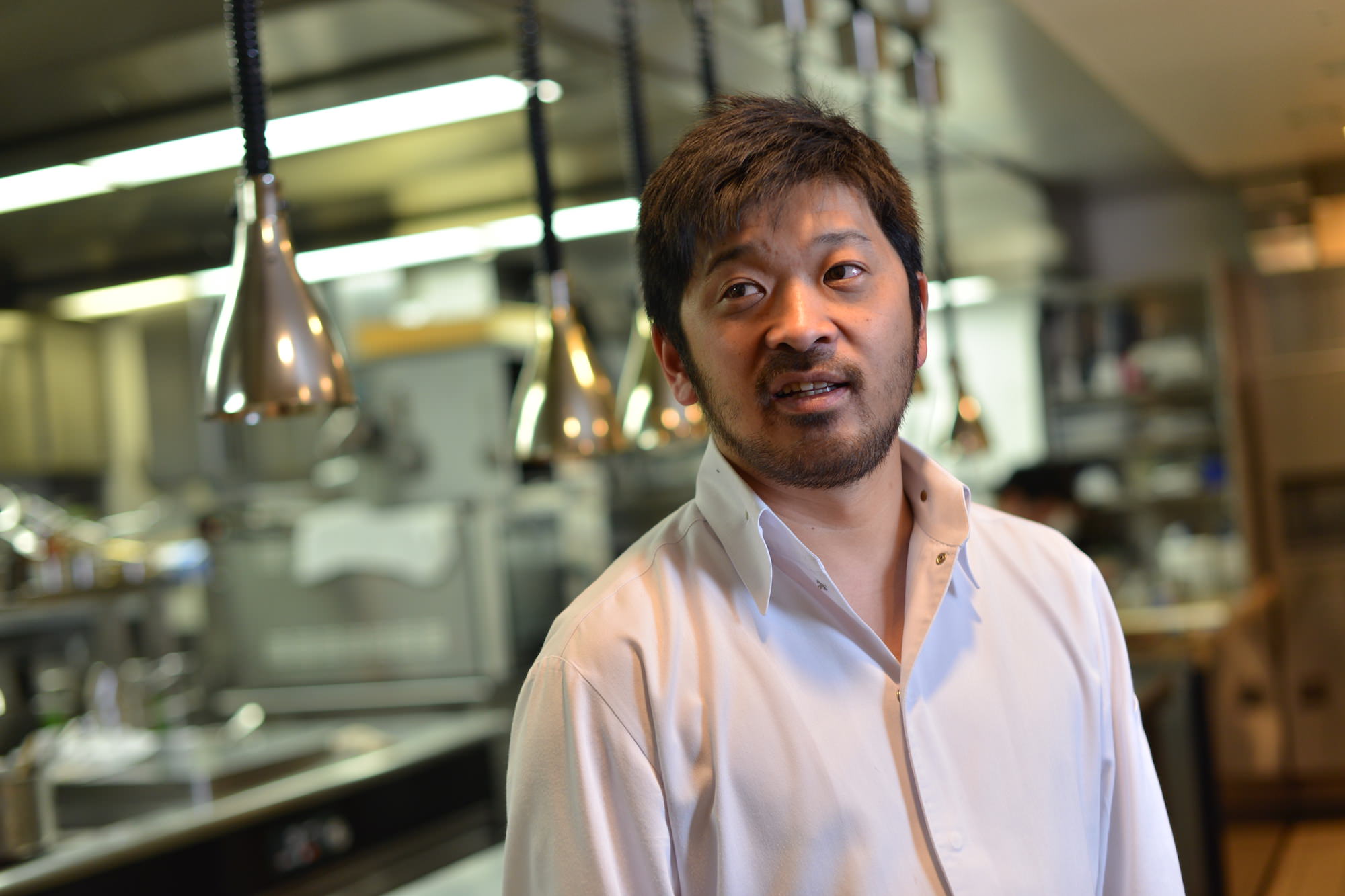 At the age of 20, Keisuke Matsushima departed Japan for France, opening his own restaurant in Nice in southern France on his 25th birthday in December 2002. In his third year, Matsushima accomplished the impressive feat of being the youngest foreign national to earn a French Michelin star rating, a rating which he held on to for 10 years straight. In the spring of 2009, he opened another restaurant in Tokyo’s Jingu-mae. Matsushima currently runs three locations in Nice including a bistro and seafood restaurant, one location in Tokyo, gets involved in numerous projects and events he is invited to both inside and outside of Japan, and is in the midst of planning for new restaurants.
Frequently traveling back and forth between France and Japan, Matsushima says he has never felt that the work is tough even amid his excessively busy schedule. He forges ahead toward his goals, adjusting flexibly as he goes. Underlying his uncommon creativity and proclivity for action is Matsushima’s original philosophy that goes beyond the bounds of being a chef: 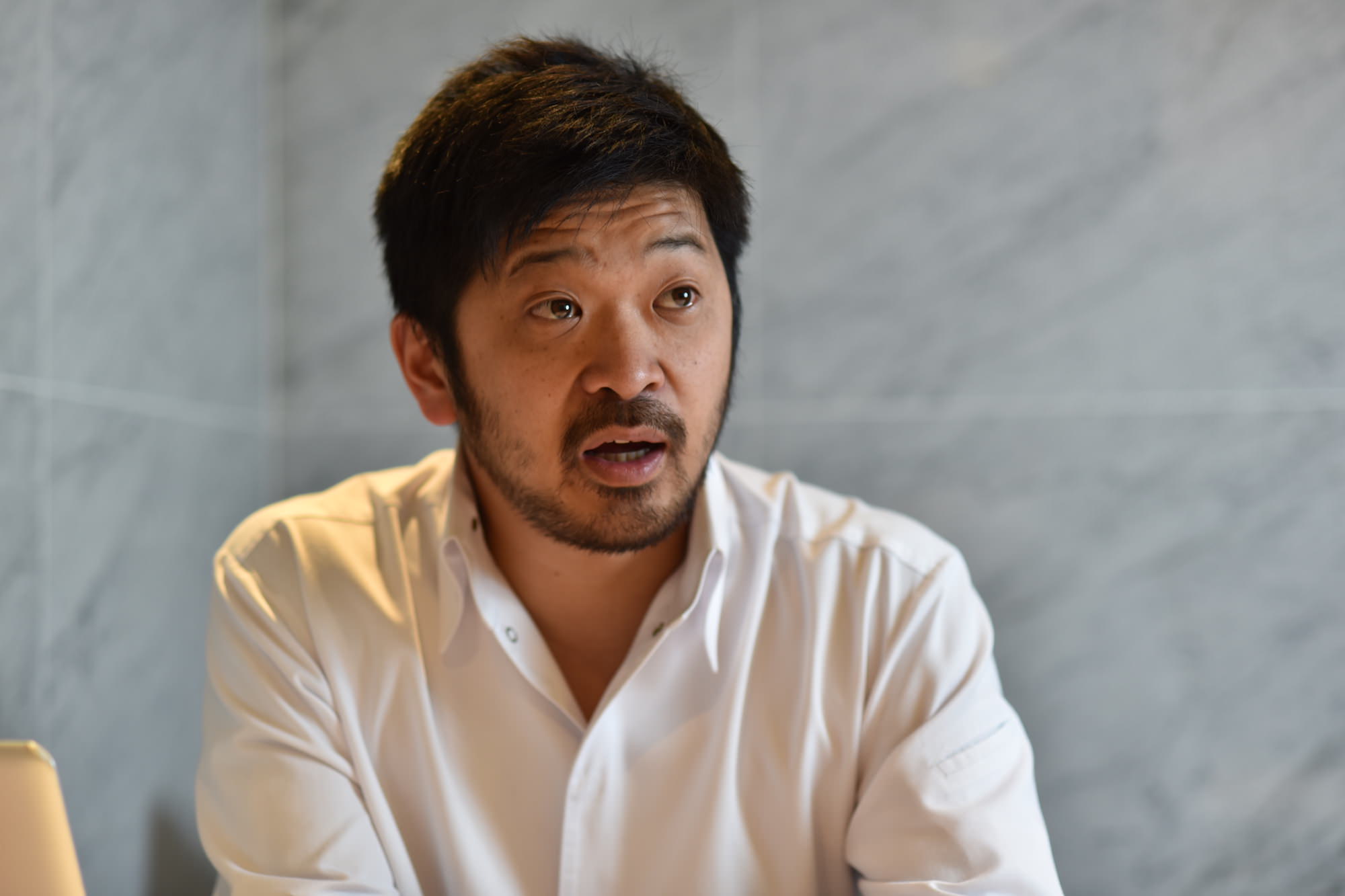 Selecting where to train, keeping in mind the shortest path for getting to France

What was it that set you down the path to being a chef?

Matsushima:
Ever since I was a kid, I was so sensitive to taste that I would point out when the taste of miso or milk changed. So, my mother told me if I was going to be that picky about taste that I should try cooking, and that is how I became interested in cooking. I feel like I was lucky when I was little because I would often go over to my grandfather’s who was a farmer, and I wouldn’t hold anything back in tasting the flavors of the natural Fukuoka ingredients for myself. When I was in 5th grade, I read a biography on Columbus and thought to myself: “I want to leave Japan someday too,” and that was when I started aspiring to be a chef of French cuisine. From that time on, I made up my mind that I was going to go to France no matter what.

What kind of training did you do in Japan?

Matsushima:
I practically have not done any culinary training in Japan whatsoever (smiles wryly). After leaving culinary school, I just wanted to work under a chef that had a long history of training in France to prepare myself to go there, so I got a position at “Vincennes” in Shibuya, Tokyo. The chef, Kazuyuki Sakai, served as the chairperson of the French Cuisine Association at the time, and he was a prominent figure with an intimate knowledge of French regional cuisine. Obviously, I felt that I would learn a lot about cooking, but I also felt that I could learn a good deal about training in France. However, first-year newcomers start off as service staff. Since they did not let us cook, I took the initiative to go in to the kitchen early in the morning and help out with preparation. Later, I was able to get on in the kitchen, but the workplace was a completely hierarchical society, I didn’t get along with the more experienced staff, and there were all sorts of things that just did not make any sense. I just could not accept even the simplest things in culinary training in Japan.

I ended up quitting and going to France after about a year and a half, so I had almost no opportunities to learn cooking directly from Chef Sakai, but a big thing was that he did teach me about how to live in French society.

In particular, I focused on studying French on my own. I think that learning the cuisine without being able to speak the language is impossible. Chef Sakai told me: “If you train in France without knowing French, you will never understand the essence of French culinary culture. Don’t be that guy.” Chef Sakai was quite an accomplished French speaker, so what he said was convincing. By the time I started vocational school, I had learned most of the terminology used in cooking, but I studied enough vocabulary that I would be second-to-none, and I went to France with the mindset that I would spend the rest of my life there. 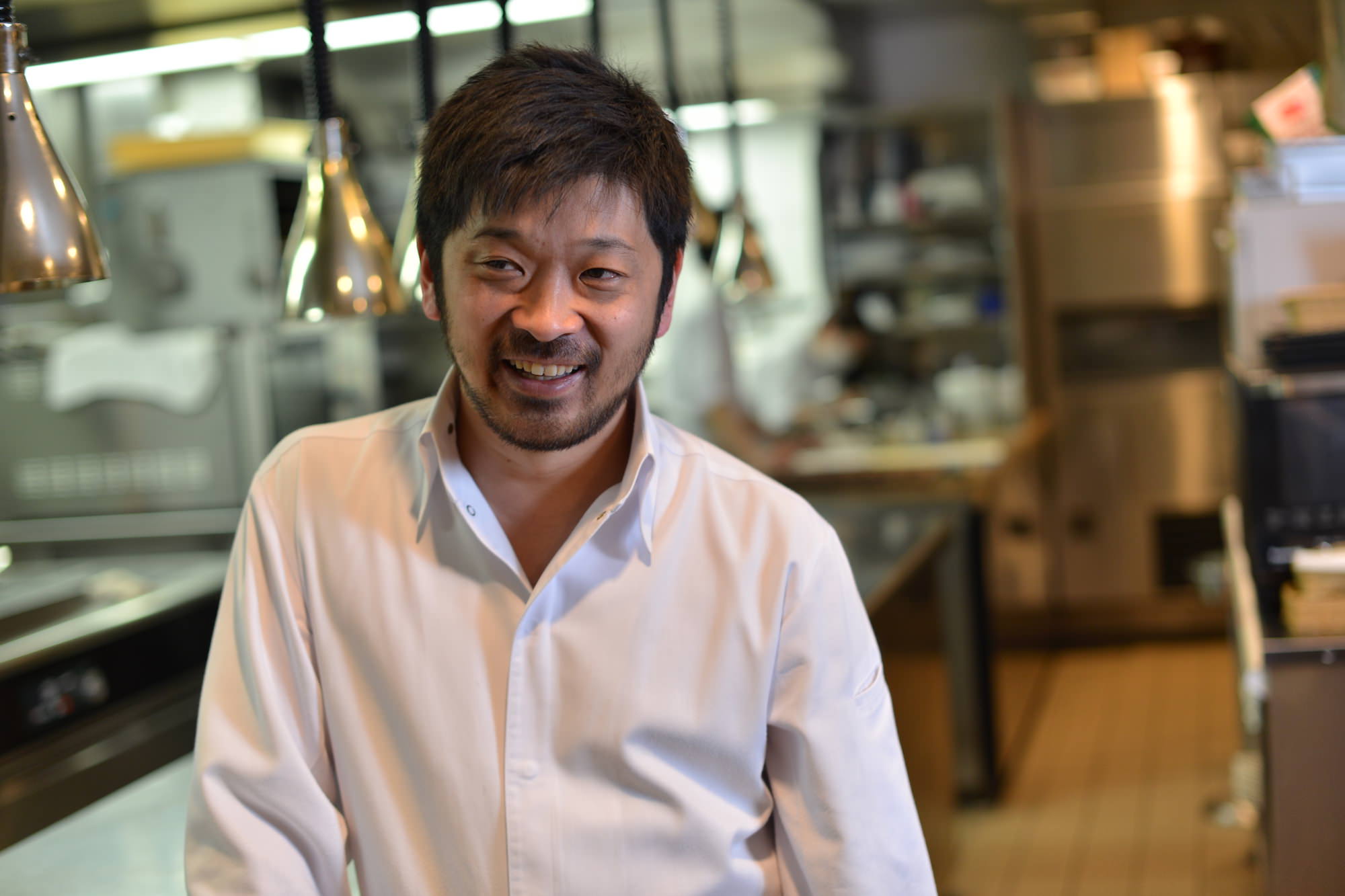 Picking up the sensibilities of the French to understand French cuisine

Going to France on your own when you are around 20 is quite a bold act, isn’t it?

Matsushima:
Ever since I was a kid, I was the type that would take action when an idea came into my head. Unlike Japan, in France they let me be in the kitchen right away. I don’t know if it is because they hate work (snickers), but it is almost like they will let anyone do the job who wants to do it.
If I do say so myself, I am rather skillful with my hands and a quick learner, so every time I started in a new kitchen I would build experience and pick up new techniques with the intention of internalizing the positive points of that restaurant. Every few months to half a year, I would quit and move on to the next place, and as I did, I probably worked at 12 places in three years.

Going from one place to another in foreign country you were not used to, were there any bumps along the way?

Matsushima:
Nope, not a bit (laughs). On the contrary, it was fun to have the opportunity to experience a new world firsthand. I mean, naturally, things constantly did not go smoothly, but I went there because I wanted to keep learning about French cuisine forever, so I never felt like there were any struggles or hardships. Besides, almost anywhere I went, people would tell me I was a funny fellow, so I felt like I got along better in France than in Japan.

Do you think that being skilled at the language helped you?

Matsushima:
I do. Still, I couldn’t speak at first just learning vocabulary, so I buckled down and studied pretty hard. About a month after going to France, I could manage to have a conversation, and it was after about eight months that I could speak fluently. To get the good jobs in the workplace, you are also way better off being able to speak French.
Oh, and being able to share your dirty jokes and that kind of thing is also important when it comes to making friends overseas. I could write a whole book on those kinds of jokes (laughs).

I think the reason I fit in in France is that I was passionate about “becoming” French. Now and for a long time, there are and have been many Japanese people training in France, but I doubt there are many who would go that far. Japanese people seem to want to mingle together overseas, but I want to ask them: “What is joining a community of Japanese people in Paris going to do for you?” If you have the wonderful opportunity to be in France, it is a waste if you don’t venture into their world and do things that you can take in and learn from. I believe that you can’t understand French cuisine without understanding how the French think and what they feel.

You already know if you mingle with French chefs, but they are interesting people and many of them like talking about a wide range of topics including politics and sports, not just food. At the end of March this year when Jardin des Sens — a three-star restaurant in Montpellier — shut down temporarily, around 40 people who trained at the restaurant got together and held a commemorative closing party, which was fun. The majority of them had become famous chefs… I still treasure those kinds of tangential connections.

To “become French,” was there anything besides language that you studied in particular?

Matsushima:
While I was in Japan, I often read books about French people with deep connections to Japan, like Carlos Ghosn’s book on management and soccer coach Philippe Troussier’s autobiography. Obviously, I also read books about cooking.
I was interested in how French people thought, what their thought processes were, and how Japanese people viewed them, so I made a point of learning about that kind of stuff. As a result, it not only brought me closer to the sensibilities of the French, but it also helped me out in terms of thinking about things such as what I could do to satisfy French customers. 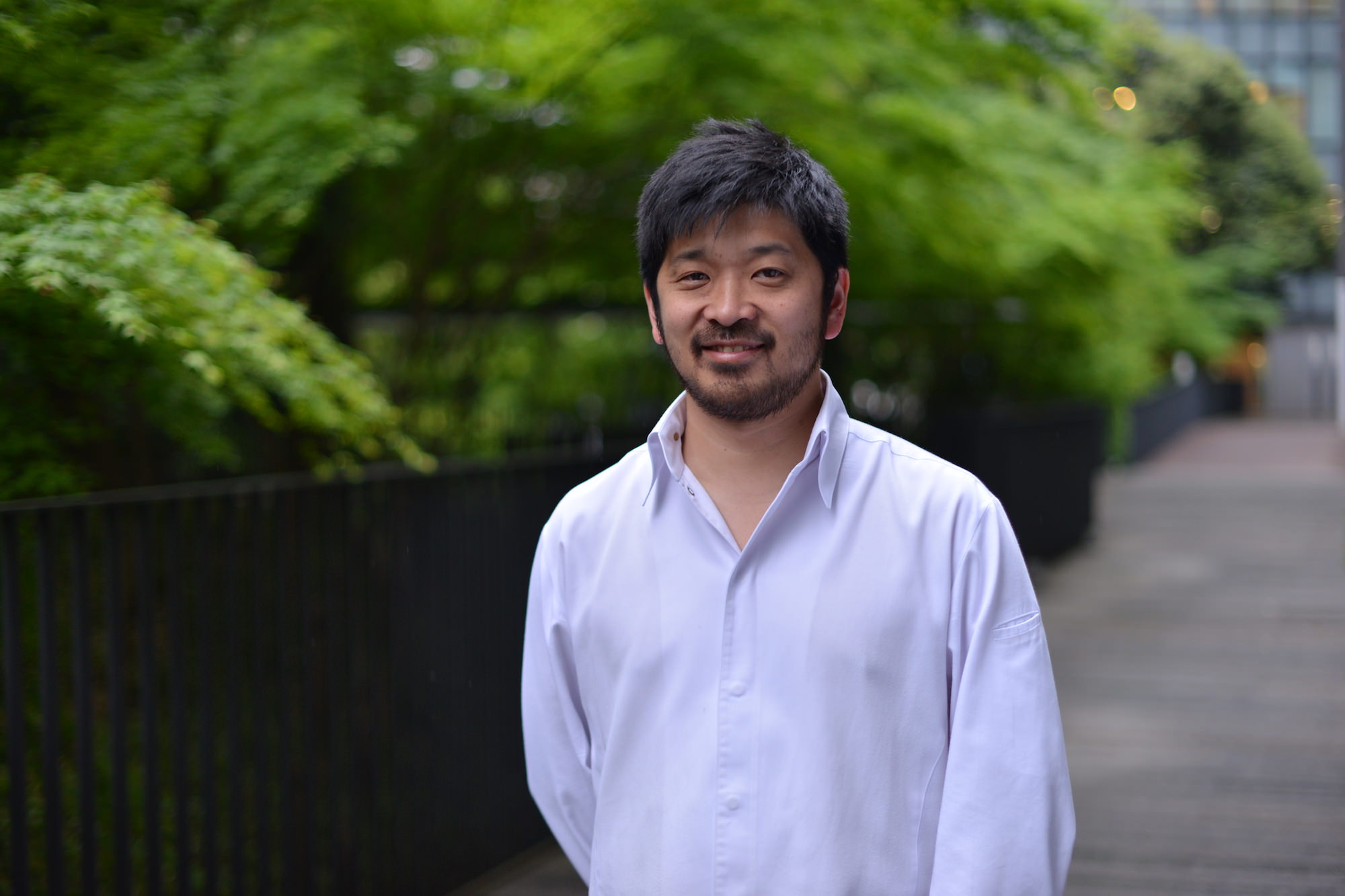