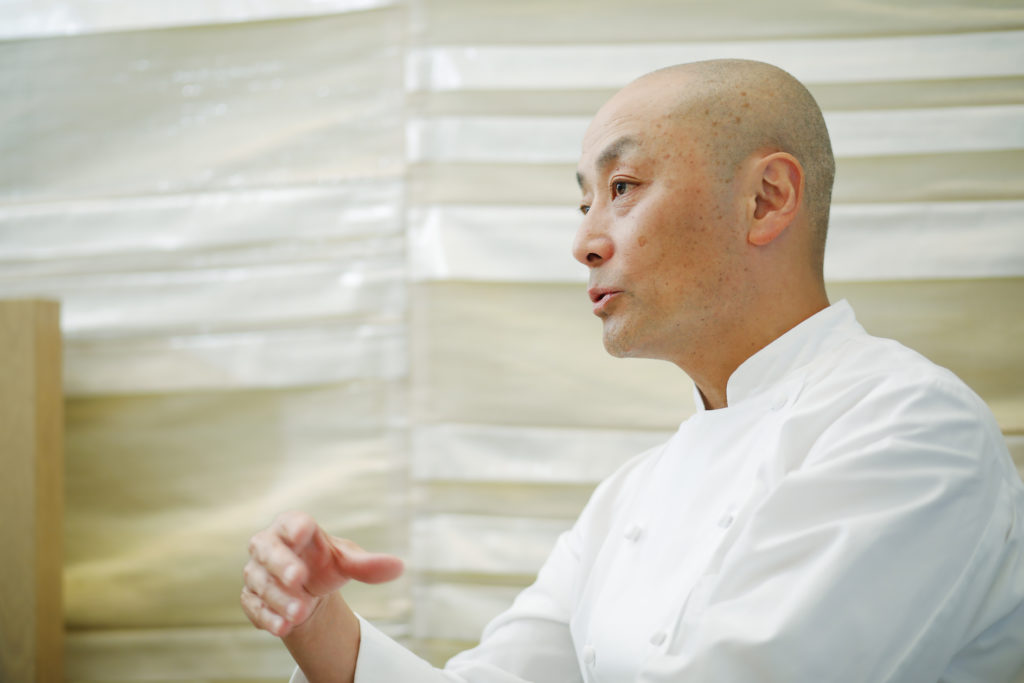 Coming back to Japan after three years; only to return to France again

Mr. Kojima :
I worked at my friend’s restaurant for about four months. After that, I was asked to work at a new French restaurant called Gaiya in Kamakura. It was going to open soon after the casual Japanese restaurant there closed; so I worked there as a chef. However, my desire to go back to France had grown gradually. There was something I wanted to do and couldn’t when I was there. Also, I had worked at a big restaurant but I didn’t have any experience working at a higher position to supervise people. For example, those chefs who can earn the MOF need to be able to work in a team, but I didn’t have the know-how of working as a team. I told the owner of the restaurant about it so we ended up closing down Gaiya after two years.
After we closed Gaiya, I helped at a restaurant called Spoon, which was newly opened by Ducasse in Maihama . It was than that I met Mr. Okubo from Pierre.

*10
He is a chef at Pierre, a restaurant in the Intercontinental Hotel Osaka. See more details in the Foodion interview. https://foodion.net/interview/susumuokubo

Mr. Okubo said he had a strong impression of you when you first met. He said you are such a special person in his life and you were like a monk or a spiritual pilgrim.

Mr. Kojima :
Oh, really? I worked at Spoon for a short time though. I was able to go back to France quickly because my visa was still valid.

What do you mean by that?

Mr. Kojima :
I was able to get a visa which was valid for ten years after I renewed the visa once a year for ten years. I came back to Japan on my eigth year and thought it was such a waste, so I went back to France every year just to renew the visa. On the ninth year, I had enough documents so I was able to renew. Mr. Franck also wrote a recommendation letter, too. On my tenth year, when I was able to get the ten-year visa, I ran out of all the proof I was able to submit. I thought it would be waste of time to go to the prefectural government. When I started to give up on going back to France, I came across a friend of mine and told him my situation. He said that his aunt worked at the government office and he would introduce her to me. However, I didn’t have enough documents to renew my visa and she said, “If only you had someone who was going to hire you…” So, I visited one of my friends who owned a clothing shop and begged him to hire me and fill out the form. Then I went back to the office. I was able to go through the reception and to the counter. A young man there said, “There’s not enough to renew your visa so there is nothing I can do.” When I heard that, I assumed it would be impossible to get a visa. But he said, “Well, if I do accept these documents, it would mean you get a ten-year visa. Then I can do that.” Then he gave me a stamp.
If my visa was not available, all these procedures would become more complicated and I would have gone back to France then. 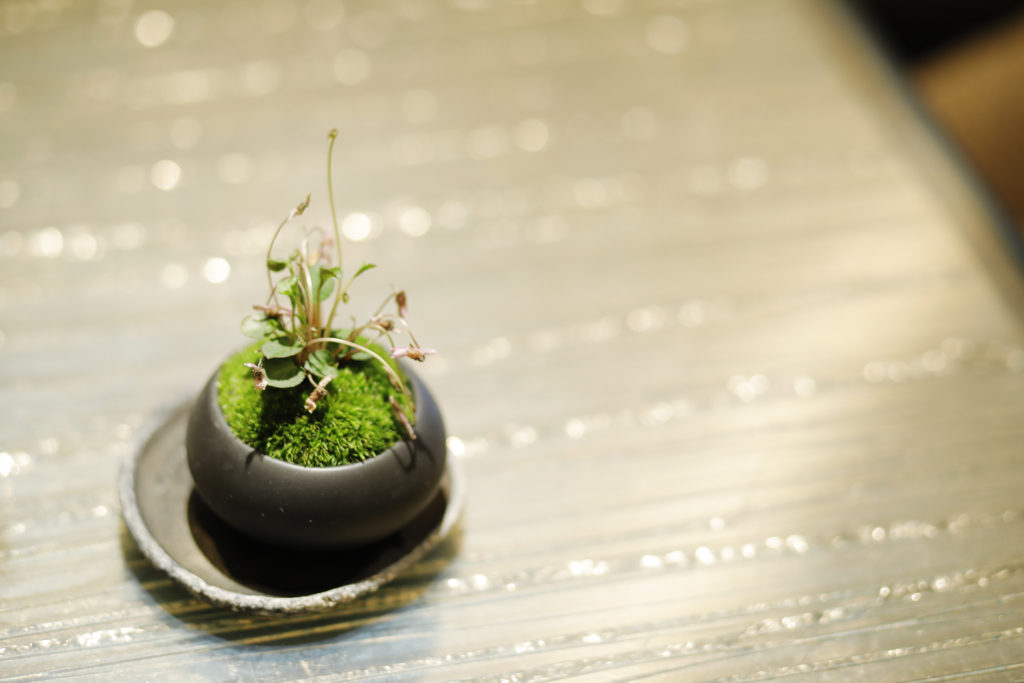 So after the dramatic visa renewal events, you went back to France to work at Ducasse’s restaurant.

Mr. Kojima :
Because I held the visa, Ducasse said there was no problem. He gave me permission to work at Louis XV in Monaco. Louis XV was very different from any of the restaurants I had ever worked for. Franck was the head chef and he had 20 chefs. There were five different sections and a section chef in each, plus five junior chefs. It was their kind of organization. They did their work very precisely, as if they measured down to the millimeters and the seconds. Their work was at a very high level. I was shocked because there was a huge gap between the restaurants I had worked for previously and Louis XV. A new chef always got a suspicious glance by the senior chefs to gauge his skills. It was a very competitive world. I was in the entrée froide section but my work involving team management didn’t go well at all for the first two years. When things didn’t go well, people around me started making fun of me. It was so tough. I thought I couldn’t go on anymore and thought about quitting so many times, but nothing went well. It was like hell.

How did you improve your skills during such a tough time?

Mr. Kojima :
I really felt my lack of skills every day. So I practiced cooking at home on my days off. When I was struggling with chopping chicken, I kept eating chickens. When I had questions or concerns, I went to the different sections to ask, then copied what they did.

What changed to get out of the tough days?

Mr. Kojima :
I guess Franck knew that I was having a tough time by seeing me struggle.
There was a restaurant in Monaco which was produced by Ducasse and only open between May and September. He asked me if I was interested in working there. That’s why I left Louis XV. While I was working there, I got a call from Franck. He said, “The sous section chef of Louis XV is quitting in September, right when your current restaurant is going to be closed. Would you like to take over the position?” A new chef was there after one of the staff, a person with whom I didn’t get along, quit. Franck said, “He doesn’t know you were in a deep slump so you don’t need to worry.” I actually needed some amount of courage to go back but finally I decided to take the offer. Then strangely, I started feeling more confident as things started going well around me. Then people started seeing me in a different light. That was when I started feeling everything was going well.

You became a sous chef at Louis XV right?

Mr. Kojima :
My situation was completely changed. There was nothing but fun moments, every day. Those last two years in France, I was able to be responsible when Franck was out. My days were not only fun but also fulfilling. I was able to have good relationships with not only chefs but also vendors who made building repairs or fixed refrigerators, as the restaurant was inside the hotel. When the other staff asked them to come over to fix something, sometimes they didn’t come very quickly, but they came immediately when I asked them. When I went to their offices, there were so many metal boards and pipes and what-not. So I sometimes asked them if they could make something I imagined and wanted to utilize when cooking, such as a cylinder-shaped pipe to cut vegetables into certain shapes. Actually, I needed to take the right procedures to ask them to make something but they helped me make them without these procedures, as a special case. I still get along with them.

Why did you decide to go back to Japan even though you were enjoying your life?

Mr. Kojima :
I thought I could live in France forever, when I returned there the second time.
However, I was of course a foreigner in France. My wife is also Japanese and she told me many times that she wanted to go back to Japan. Mr. Ducasse and Franck worried about that issue.
I thought Franck was enjoying his life very much, going to the mountains on his days off for hunting, going mushroom-gathering and spending time together with his family. I thought his life was full of enjoyment. If I was satisfied with my life in my own country, it would be the best place to live in because I wouldn’t have to carry my passport all the time and worry about visa issues. There were things I was only satisfied with in France but there were also things I sacrificed, on the other hand. When I was concerned about my future, Franck asked me if I could work as a chef in ADF+TSUJI because one of the French chefs was saying he wanted to come back to France. He also said it would be good timing for me to go back to Japan. That’s when I decided to go home.

※11
A culinary research institute opened in Tokyo by the Ducasse group and Tsuji Culinary College. They did apprenticeship programs for professionals, amateurs and students. It was closed in 2008.

How wer your five years at Louis XV?

Mr. Kojima :
My life was totally changed at that time. I felt I became a different person by the time I left. I did more than my best and my effort paid off. I guess I was able to have confidence thanks to my experience from that time. 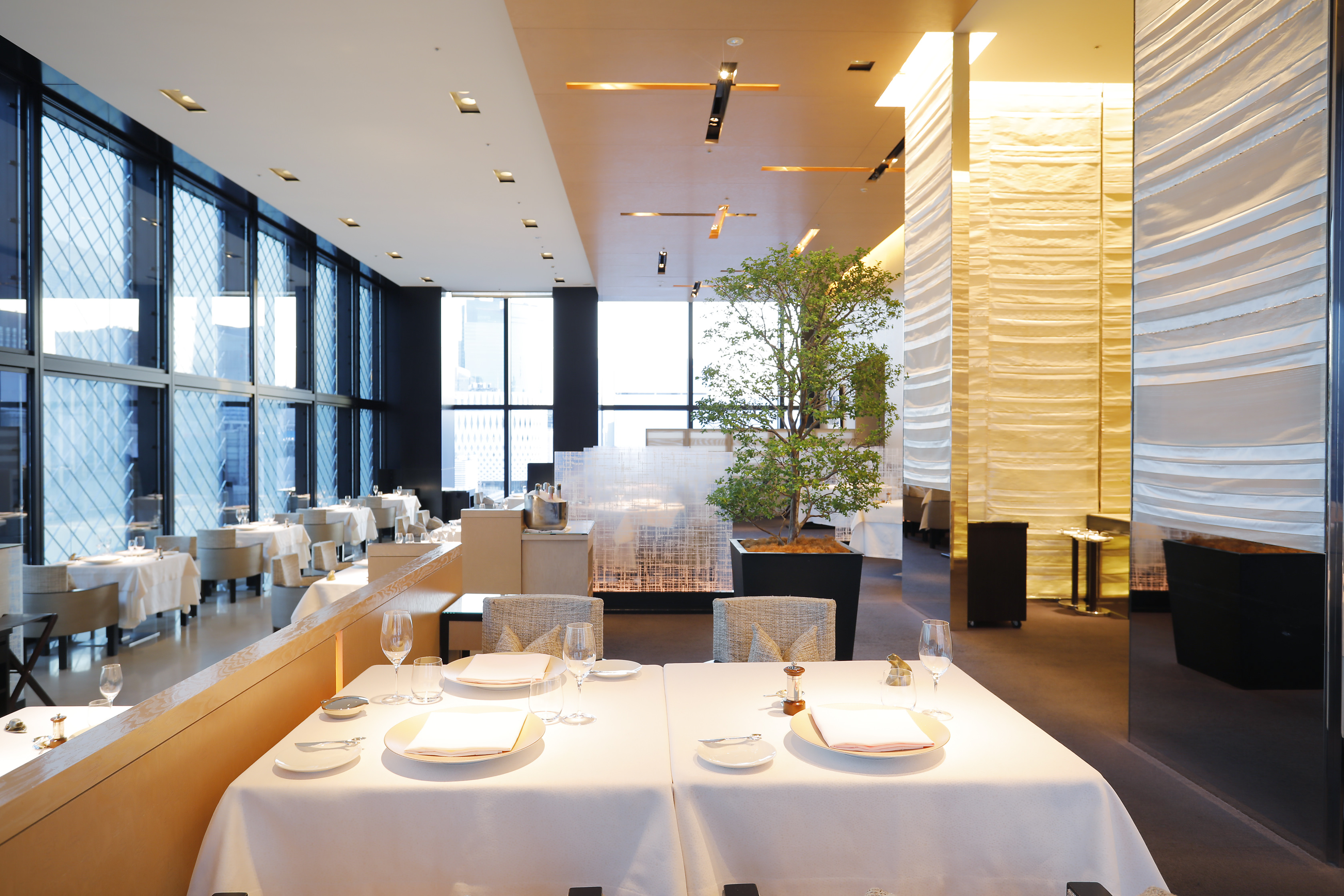