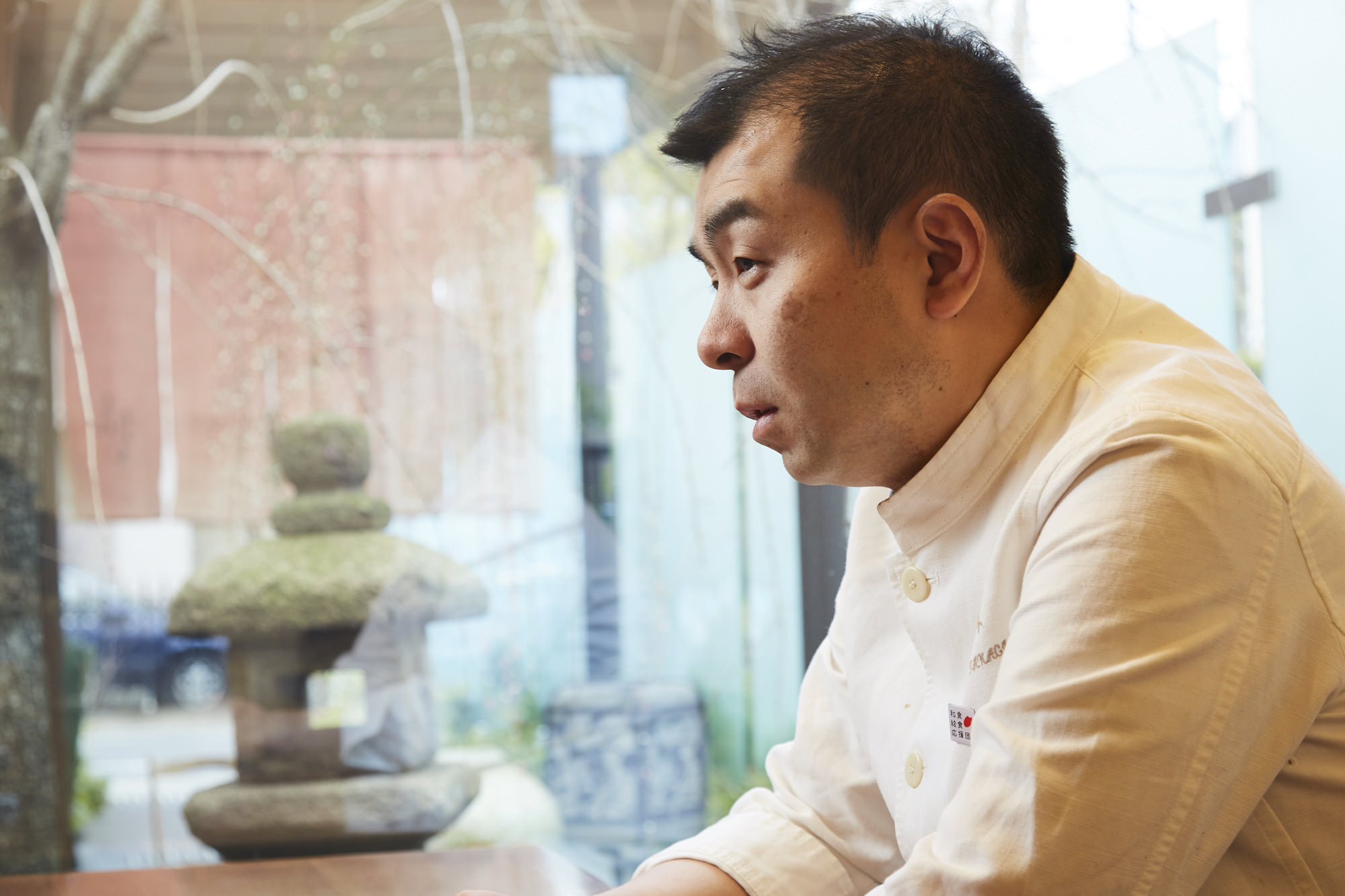 Kyo-ryori Takagi owner Kazuo Takagi has used his experience of studying abroad in England where he cultivated his talents in language to thrive; among other things, he has become the consultant chef for the Japanese restaurant at Taipei's Shangri-La Hotel, and devised Intercontinental Hotel's Japanese cuisine menu. We listened to episodes from his 10 year long apprenticeship at a well-respected, long running dining establishment, his thoughts on his restaurant, and his dreams for the future. 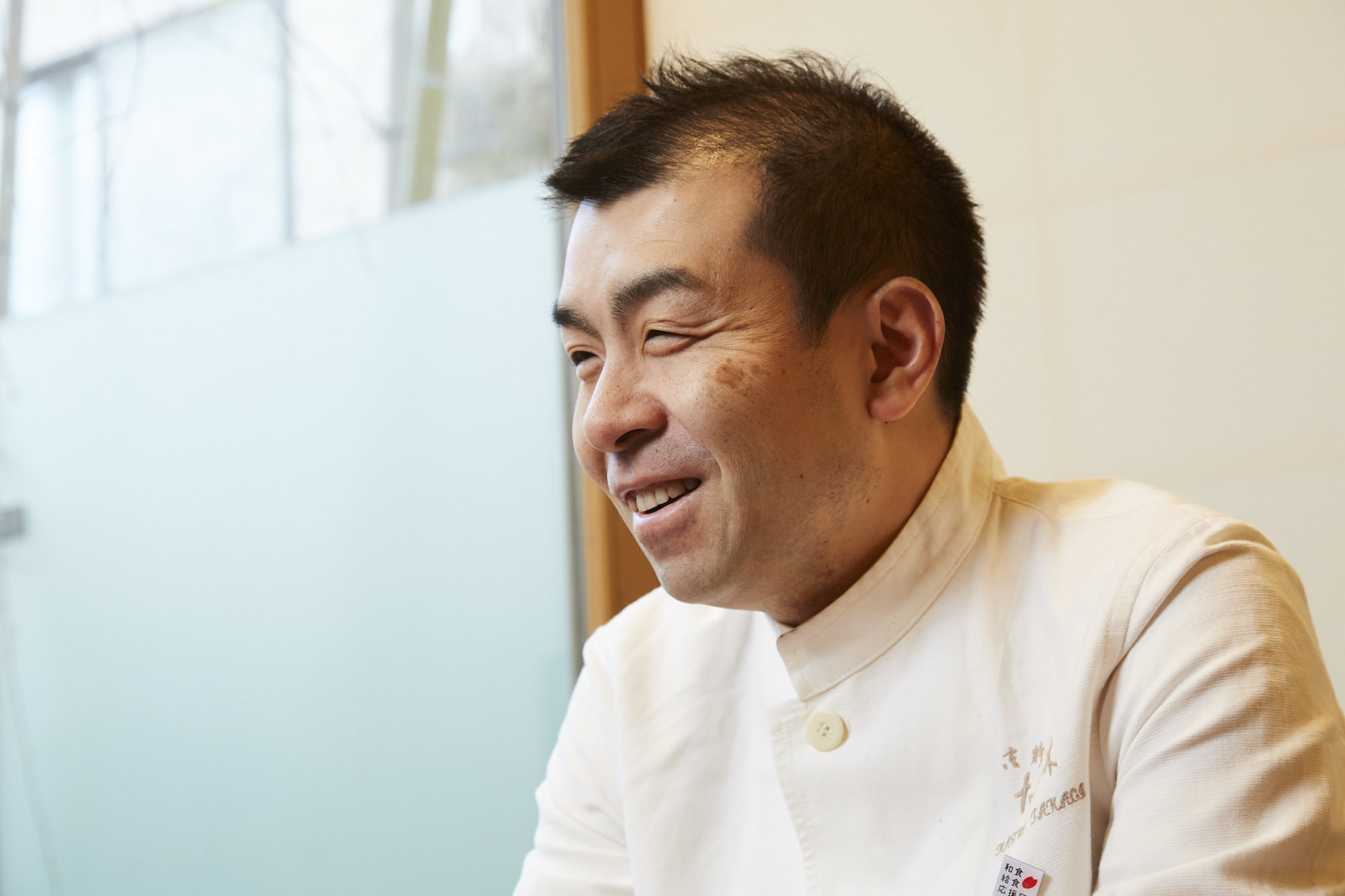 Looking up to his grandfather who was a chef.

What was the impetus for you to enter this world?

Takagi:
My grandfather, who I love dearly, was a cook. When I went to his house to play, he would make sushi after we would be going shopping at Tsukiji, or bring me along fishing and cook the fish for me … He treated me to these things to an amazing extent. Looking up to this figure of an old man I really loved and respected, it was around kindergarten that I decided. “When I grow up, I’m going to be a cook!” My mother loved cooking, and when I was in junior high school she started a cooking class in our house with about 200 students. Then since my father was a hotel employee, some hotel cooks would come to visit our house, and my mother would treat them to her homemade cooking … It was because I was raised in such an environment that from as early as I can remember I had a feeling I wanted to cook for a job.

Around what time did you actually step onto your path to cooking?

Takagi:
It was my fourth year of college when I really started my training. My master was the instructor of a cooking class that my mother went to learn from, and also the lead chef of a long-running and respected restaurant in Kyoto called Kyo Yamato. When I was a kid, my parents would often take me to the restaurant to eat, and that’s where that master said to me, “It’s not too late to study cooking even after you graduate from college. If you learn at college and still think you want to be a cook, then you can apprentice yourself at my restaurant.” So I went to college, but my college life was boring (laughs). I made a lot of friends, but when we talked it was always about girls and cars … it was all that sort of everyday talk. It came to this point that when I was helping out with my mother’s cooking class, I would see these kids from professional schools apprenticing at the restaurant … I started really panicking. That is when I went to my master to say, “I’ll quit college, so allow me to be your apprentice.” But he got angry, saying, “There is no way you can handle a cooking apprenticeship if you can’t even get through college. Graduate properly from college and then come.” (laughs)

Then after that, while I was still in school, I came to him for advice, saying, “I want to take a year off from college and study abroad in England to learn English.” He told me, “I’m certain the day will come when Japanese cuisine will be spread out into the world. And that would be a great thing, so you go off and study.” As I was still in my teens, I did not understand what my master’s words meant, but he had caught on to the idea that one day Japanese cuisine would be recognized worldwide.

So I went to England to study abroad and came back. He told me when I was in fourth year that as long as I went to school once a week, it was okay with him, and that’s when I really started being apprenticed under him. Back then, there were not many people who had graduated from college and wanted to be a cook, so everyone on staff who was my age were my superiors … My apprenticing days were so tough I cannot remember them anymore (laughs). In any event, it was so stressful that after going into the apprenticeship, my 85 kg weight went down to 62 kg.

Takagi:
First I spent four years apprenticing at Yamatoya in the north of town, and then afterward moved to Kyo-Yamato for two years of apprenticeship. Then around that time, my third child was born, and I went asking my master for help, saying, “I can’t go on like this with such a low salary.” What was decided in that discussion was something like, “Okay then, go work in the hotel kitchen.”

Although I did get paid more than I ever had at the hotel, I did not feel any kind of satisfaction in the job at the hotel kitchen. I started worrying that I didn’t apprentice myself all this time just to chase the money in front of me … Is this going to be the result of all that apprenticeship? About half a year into it, that is when I came begging my master, “Let me quit the hotel,” and he let me return to the kitchen at Kyo-Yamato. The perks of having two days off a week at the hotel were nice, but … I thought if I went on like that, I would be crushed as a cook. It’s like when they say you can’t run an average of 100 km if you can’t manage enough strength to do 180 km. That is very important, whether you can cross that line in your apprenticeship. I think if I had remained at the hotel back then, I would not be here now. 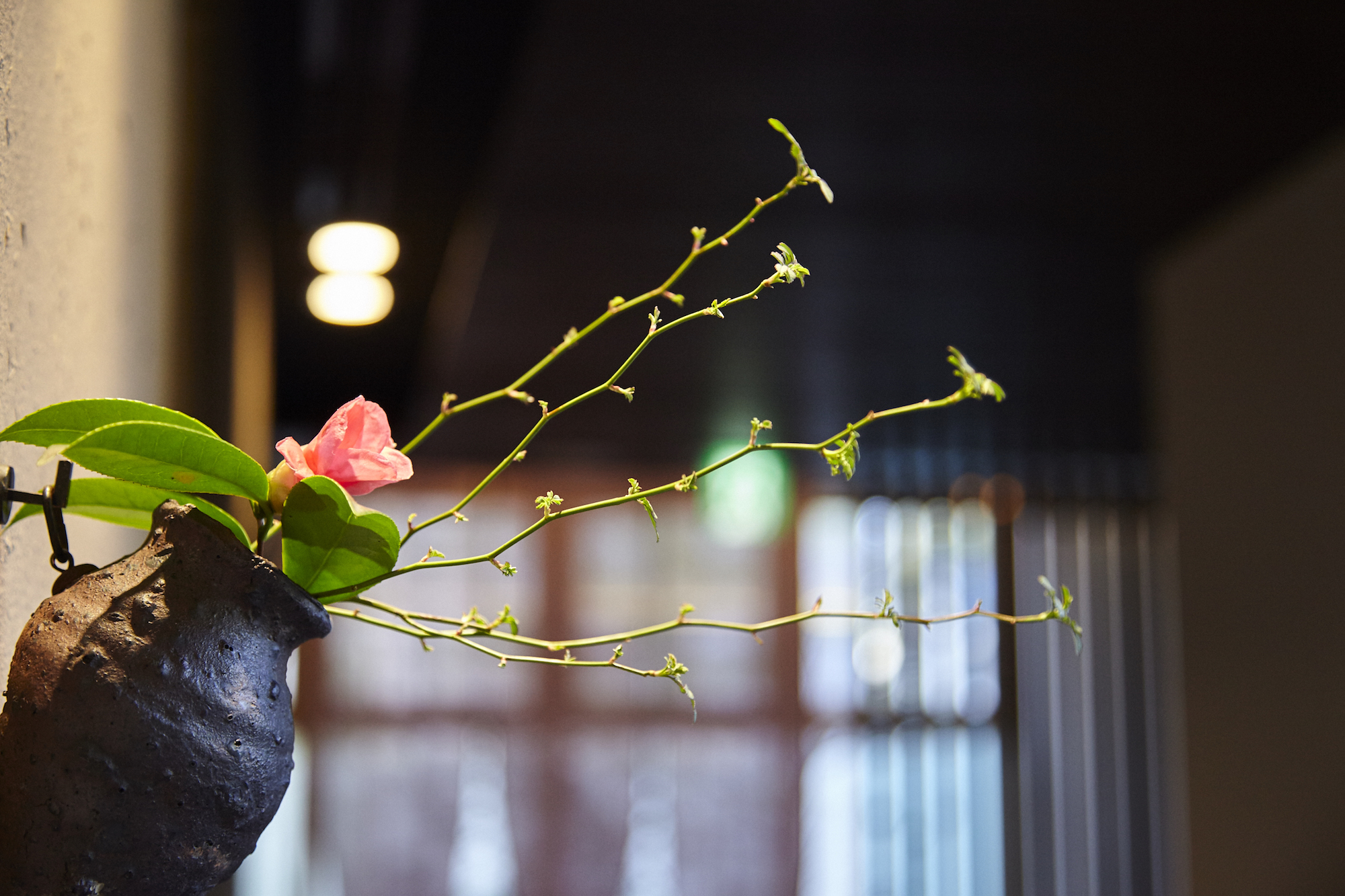 A reaffirmation of the excellence of a first rate job.

Was there really such a difference between a hotel job and a restaurant job?

Takagi:
My feelings really changed when I went out of it once to work in the hotel. I would like to tell this to young kids who are in apprenticeships now. If you start out working at a great place, you will really experience some powerful feeling for what you are doing, but after a year you will get used to it; everything will become totally routine. Even if the ingredients and dishware are high quality stuff you would not find at a normal restaurant, when you are seeing them everyday, they lose that special feeling.

When I was allowed to go out and work at the hotel, I found out just how much I had been allowed to do great cooking, just how much I was allowed to touch great ingredients, just how much I had used great dishware … I noticed this all over again. And so it was when I went with a bowed head asking my master to let me return that, I think in the true meaning of the word, I really began my apprenticeship. From then ,on the way I thought of my job changed greatly. It was like … a year afterward I became a soup cook, and then two years after that the second assistant cook.

From when I returned from the hotel to the point that my master told me go out on my own, I had always determined that I was going to follow my master. So when my master decided to retire for age reasons, I quit with him and ended 10 years of life as an apprentice. When the lead cook quits, his apprentices all quit with him, and this is called “all-quits” … That was when I was 31 years old.

Did you strike out on your own immediately after ending your apprenticeship?

Takagi:
When I talked to her about it, my wife said, “I’d like you to work at a stable hotel with days off.” So when I was looking for a hotel job, there was a place that wanted me for a reasonable position, but … I always thought that in the end I want to be a cook.

At that time, I remember once a long time ago I had an acquaintance in Ashiya who was a dishware store owner and he invited me, saying, “Why not team up with me and manage a restaurant?” When I went to see him again, he told me, “I’m thinking of quitting the dishware shop, so how about using this place for your own restaurant?” That’s when, in about 26 square meters of land near Ashiya Station, I decided to open a small restaurant that could seat about 10 people with a counter and four-person table.

Takagi:
It opened in February and at first lots of people who I knew came; however, from April until Golden Week after everyone I know had come for a visit … people stopped coming (laughs). I myself had no plans, not even fliers distributed at train stations. I was really worried, but one customer who came in March was a writer for a gourmet magazine. The restaurant was kindly introduced in that magazine. It feels like that the turning point was when other magazines came to cover the restaurant, and eventually word spread. 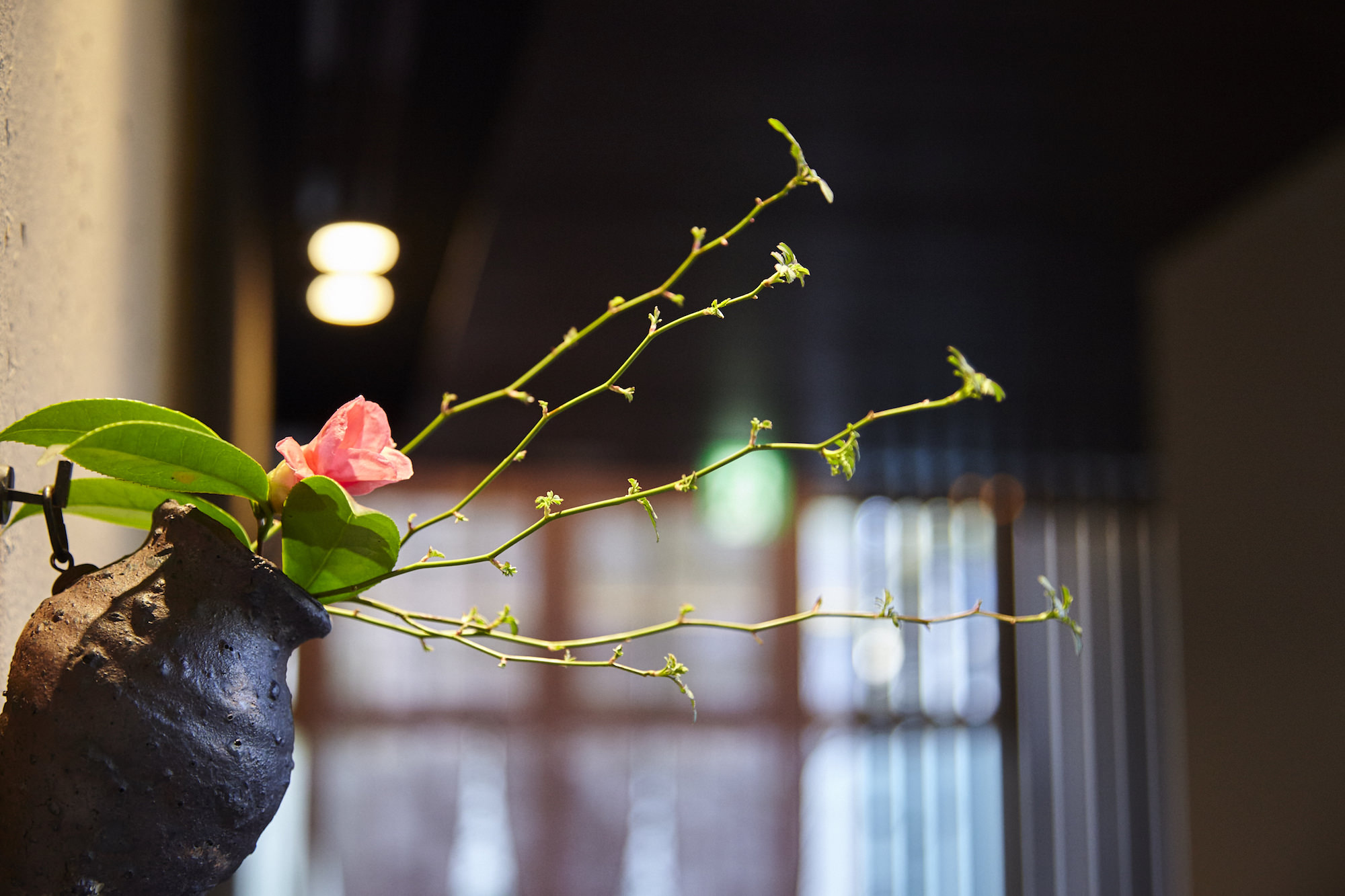