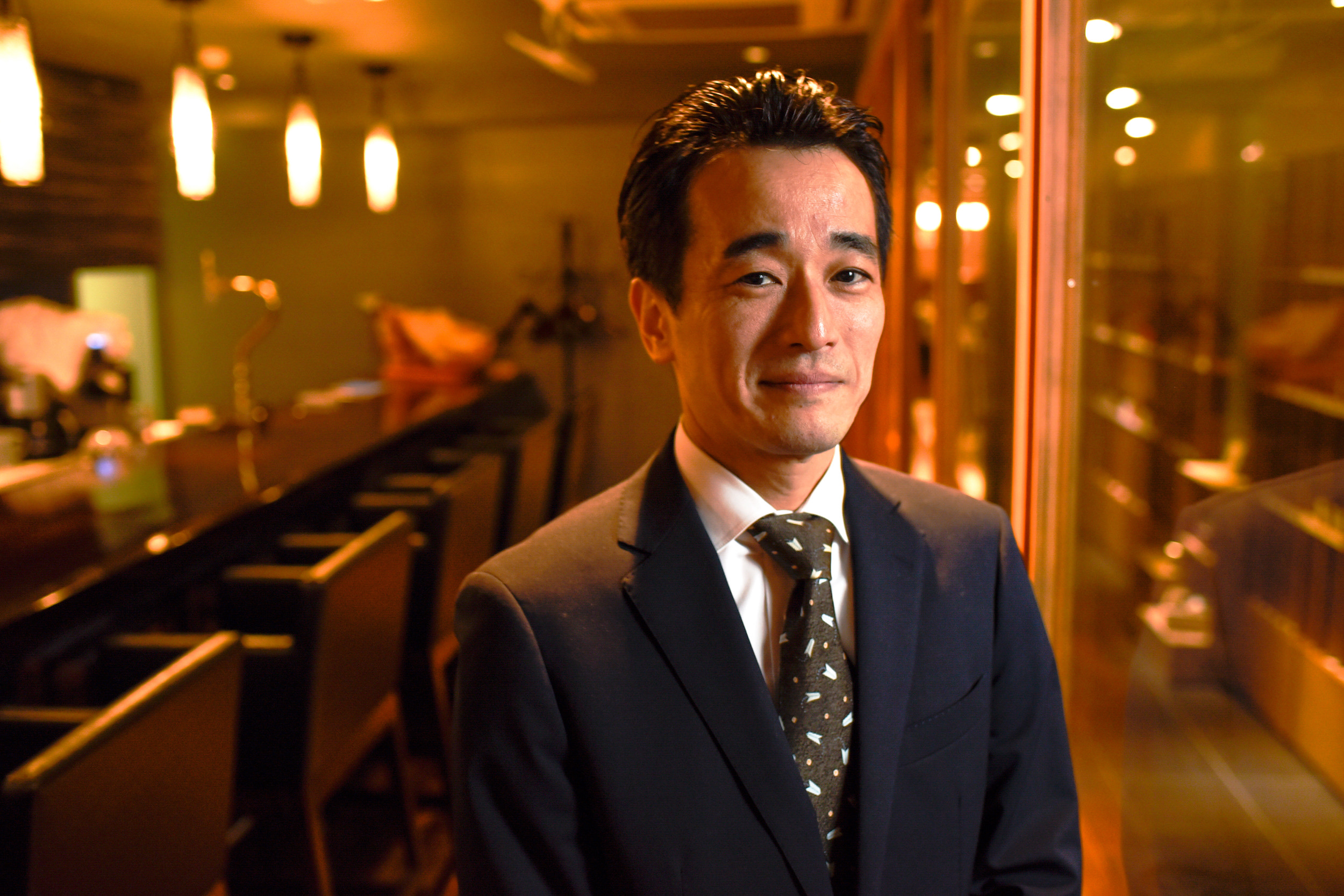 Kazumi Okabe, who worked his way up as a waiter to make his way into the industry as a restaurateur, garnered substantial acclaim with his previous work as a representative of French restaurant group“Au gout du jour”. His professional life has centered around the food and service industry in Tokyo, and he has gone on to open one successful French restaurant after another. After spending time managing “Kyobashi Dompierre”, “Le Bourguignon”, and other well-known establishments, as well paying attention to the way chefs and staff members worked at each place, he found a way to deliver highly attentive service to countless numbers of people by ensuring that each and every person could enjoy the best dining experience possible.
Mr. Okabe, who is still present in the restaurant scene despite his retirement from company management, told us about the fulfillment he feels after getting to“make a name for yourself in a profession that you love”. So, we asked him to look back on his life so far and see what led him to a career in restaurant service. 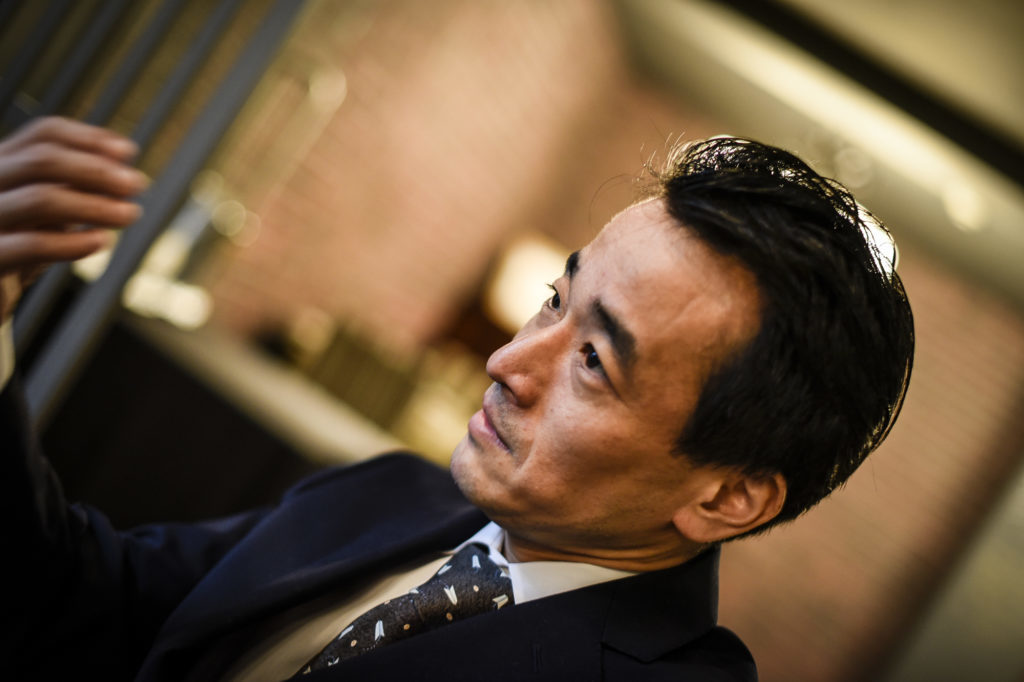 When did you first start thinking about working as a restaurant server?

Mr. Okabe:
Originally I wanted to become a chef, and sometime around the 3rd or 4th grade I remember writing about how I wanted to cook Japanese food when I grew up. Even so, I didn’t especially like Japanese cuisine at the time. I was born out in the countryside in Kyoto’s Tamba region, so I didn’t know anything about French food and the like. So as far as I knew any chef was someone who cooked Japanese food.

But, I still went ahead and entered culinary school in Osaka after my high school graduation. I thought the instructor that taught French cooking there was really cool. And, I remember thinking to myself that my future had to be French food or nothing, I just couldn’t be bothered with anything else (laughs). It was there that I first became acquainted with French cooking and learned that a waiter is referred to as “garçon”.

I figured that I should get to know the service side of restaurant work if I was going to become a chef, so as an extracurricular I decided to study restaurant service. This ended up being the impetus for everything to come. My instructor referred me to “Maxim’s de Paris” in Tokyo’s Ginza neighborhood, and I decided to take on a job there shortly after that.

Maxim’s de Paris in Ginza was one of the first French restaurants in Japan that recreated a famous Parisian establishment. Was that something that piqued your interest in those days?

Mr. Okabe:
Yeah, it certainly did. I actually had a colleague with another year’s worth of experience, and they had to wait for an entire year before they could get in. I had heard there were a lot of people doing wedding work there too. But, if I had to sum up my memories of Maxim’s it would be a feeling of frustration (chuckles), since the staff that already been working there for a while yelled at me on a daily basis.

The workplace had a perfectly vertical hierarchy. The lowest rank was called a “commis,” and above that was a “chef de rang,” and then a “maître d’hôtel.” These three roles would form one team and work as a system to manage a table. At the time there were 15 staff members split between 5 teams. At the top of the chain was an assistant manager, manager, and general manager. The general manager was from France, and there were 4 other higher-ups that were at the top. Then in addition to that, the sommeliers had their own separate hierarchy. When I think about it now it was definitely the kind of extravagant restaurant that could make a name for itself in a place like Paris.

As you would expect I started as a commis, and there were two people in charge of me that would bark orders all at once and have me running all around the restaurant. They would say “take this, take that… get this food out, get the next thing ready,” and stuff like that. When special guests would come in there would be 4 superiors, including the manager, all giving orders at once. It was such a frantic time trying to work like that. Making a mistake was completely out of the question, so I would try to take care and not anger them. I was eventually able to figure out right away which orders I needed to move on first, but even with that I was still getting yelled at all the time. I spent 3 years there until I quit, and it was a completely thankless job. Every morning when I woke up I felt like I wanted to run off and never go back to work.

How were you able to last for three years and put up with brutal work like that?

Mr. Okabe:
I got a special referral from school to work there, so I felt like I couldn’t let my instructors and older colleagues down. My school and Maxim’s were connected, and there was no way I could cut that off. Thinking about that was enough to get me by. In the end, even though I was putting in a lot of thought and effort into my work, one of my bosses came up to me and said that it was “my job to say sorry.” It was a completely unreasonable thing to say. I just couldn’t put up with it so I lost my temper and quit. 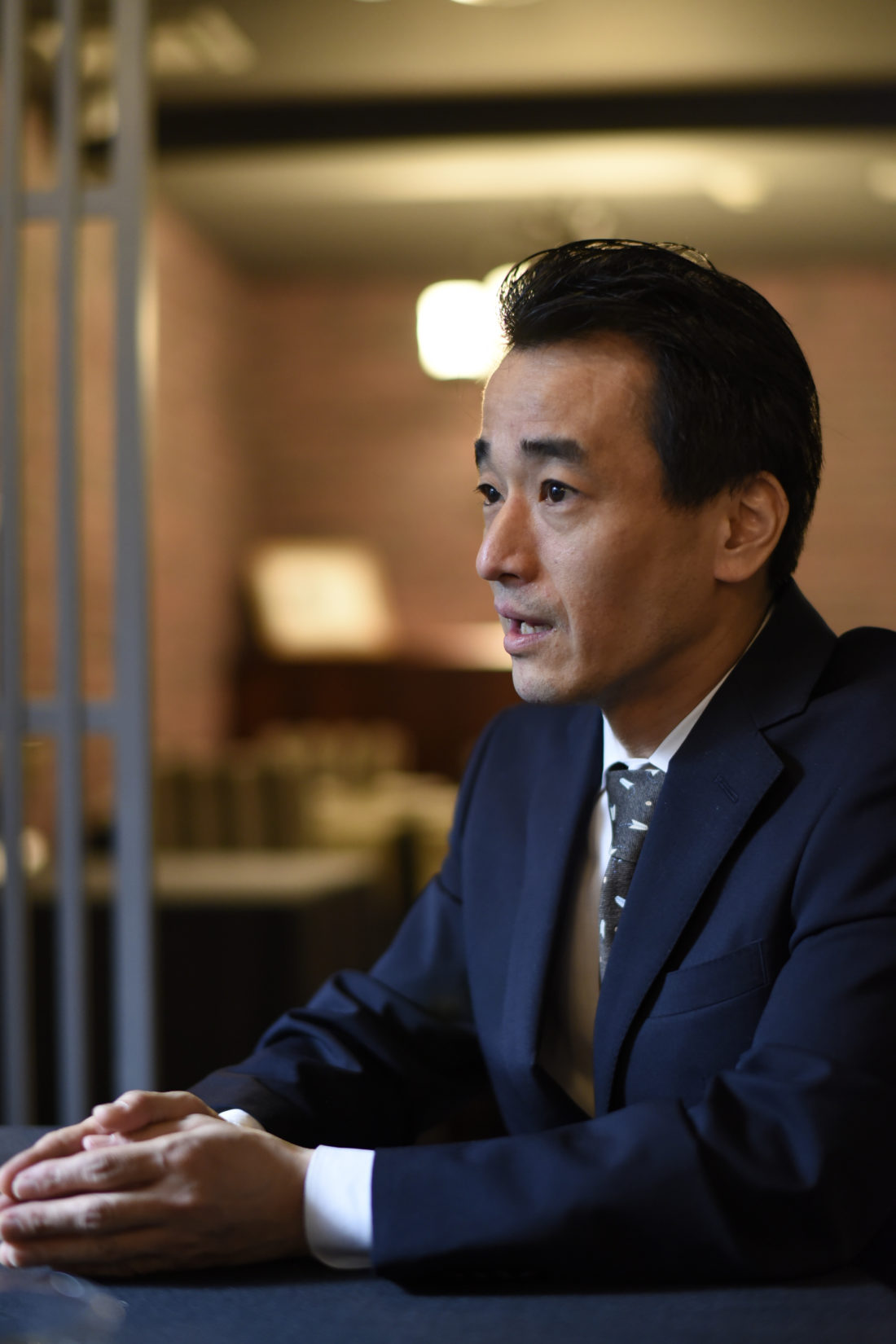 Making sure to leave money out of the question when picking a job, and the necessity of finding something worthwhile

At that point you were in your early twenties. Was there a lot that you were hoping to learn during your time at Maxim’s?

Mr. Okabe:
Well, during my 3 years there I never actually worked directly with customers as a server. The role of a garçon is actually quite broad, and the job has to tailor itself to each customer, which means you have to know a lot about food and wine. Though at that point that was all still outside of my grasp. There just wasn’t anything for me to hold onto at the time.

Around that time I was happy to have instantly found a different place to work that looked like it would give me an opportunity to work out in the dining area.

But, it was a disappointment. It ended up being much slower than I ever could’ve imagined (chuckles). It was a high class restaurant that was for reservations only. The problem though was that this was right after the bubble economy burst, so days would go by without any customers. They had a lot of previous capital to work with, which meant that they still paid us our salary without any issues. Nonetheless, I left after two months. Honestly, the salary was quite good. However, this taught me that you have to find something worth doing, rather than just work with nothing but money in mind.

Did you find somewhere else to work right after?

Mr. Okabe:
One of the bosses that I had become friends with during my time at Maxim’s referred me to “Le Poulet” and gave me the opportunity to work there for a year. The restaurant was like what you see nowadays with wine bars, and they had French food, and stuff like yakitori. The owner there was basically a teacher of sorts. He had a bit of a drinking problem and he could be quite scary at times (laughs). But, he knew a lot about wine and I was able to learn a lot from him. I’m not exaggerating when I say that everything that I know about wine today stems from this point in my career.

So now it seems like you were really getting a feel for working as a professional server.

Mr. Okabe:
When it came to serving it was just the owner and I. The restaurant had two floors with about 40 seats all together. When lunch time came around on the weekdays we would be completely full with office workers from nearby. It was extremely hectic.

Occasionally we would have regulars stroll in for a drink around 11pm when we were closing up and we would hang out with them till morning. Sometimes we would close up and take them along to hostess clubs and places like that, which often meant that we wouldn’t be back until something like 4 in the morning (chuckles). After nights like that it was pretty much understood that the owner wouldn’t be showing up until later in the day, but I was always there right at 8 in the morning. I would have to handle lunch all on my own. I was still young in those days so I managed to pull it off, but my body wouldn’t be able to handle it nowadays.

You took on 40 seats across two floors on you own? That’s amazing.

Mr. Okabe:
You think so? (chuckles). Lunch came on single plates for 1,000 yen each, and as an addition customers could pay more to order dessert as well as coffee or tea. Of course I had to accommodate these additional orders, but it was way too much to take on by myself. When the owner came in during the evening he would look at the receipts and yell, “Why aren’t there any coffees out? What are you doing!” I wanted to respond and say, “Hey! I’m all on my own over here and it’s impossible!” But, I was too scared and all I could do was muster an apology.

Mr. Okabe:
He was murderous if we didn’t sell well. I mean… it was in a half joking sort of way, but at the time I was just as scared nonetheless. Actually, before I even thought about things like making customers happy or increasing sales, I just thought about my own self-preservation and how I needed to get those additional orders out no matter what. During my time at both Maxim’s and Poulet my work as a server was motivated by self-preservation.

But you know the crazy thing is that I lived through the whole experience. Thanks to that I was able to learn how to guess what customers were going to do. I would constantly guess what was going on at each table on both floors, and I would take orders and get food out. I predicted when customers finished their meal so I could make it up and down from the 2nd floor with good timing. I got the hang of it and notched off minutes and then seconds off my time. I would account for the amount of seconds it took for taking plates, the minutes it took to get back for dessert, and then finally the seconds it took to check in after a meal. I would anticipate everything so that I could make my way around the whole restaurant. It gave me a real sense of accomplishment when I pulled it off right, and it was completely worthwhile to me. 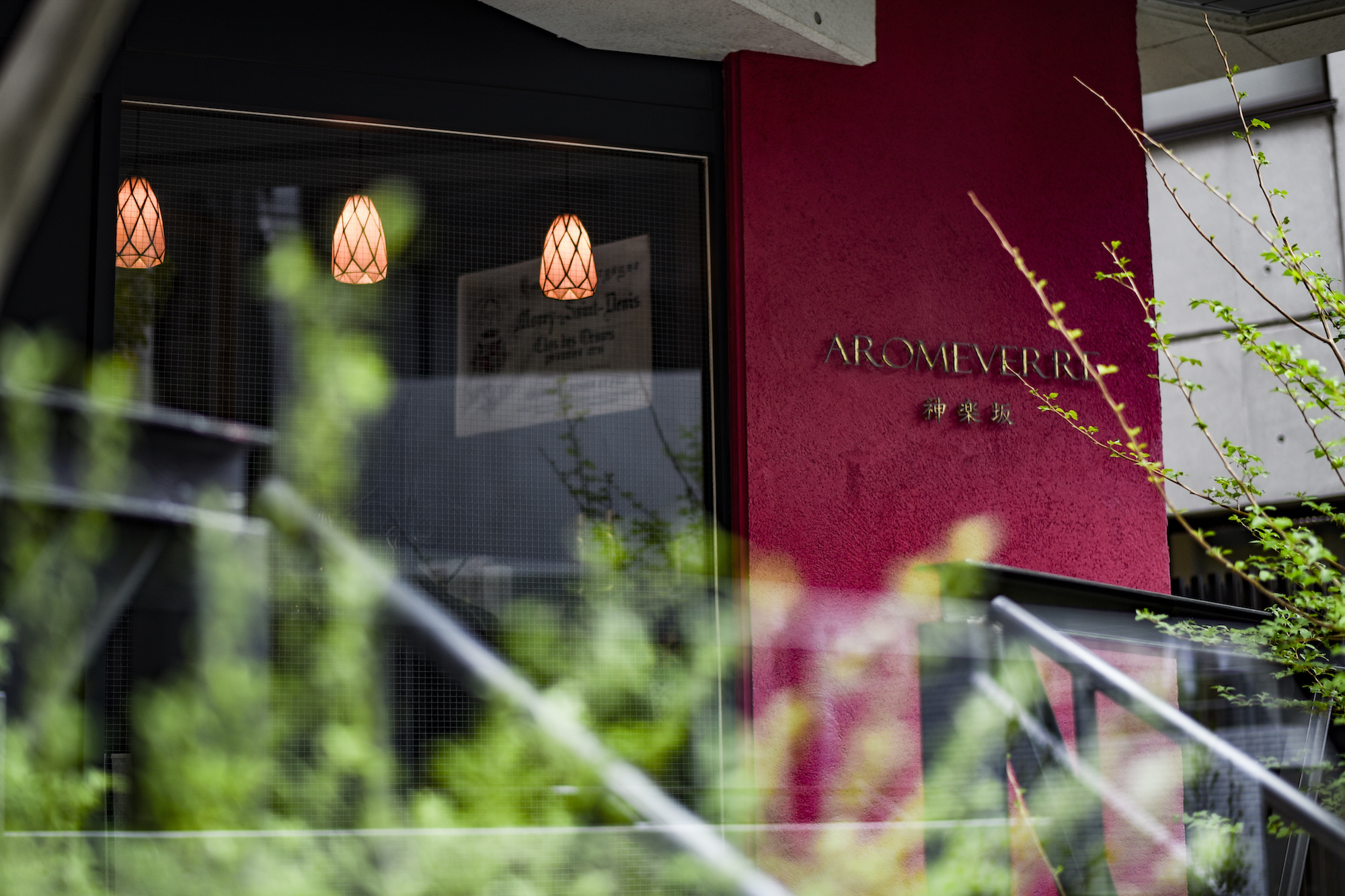