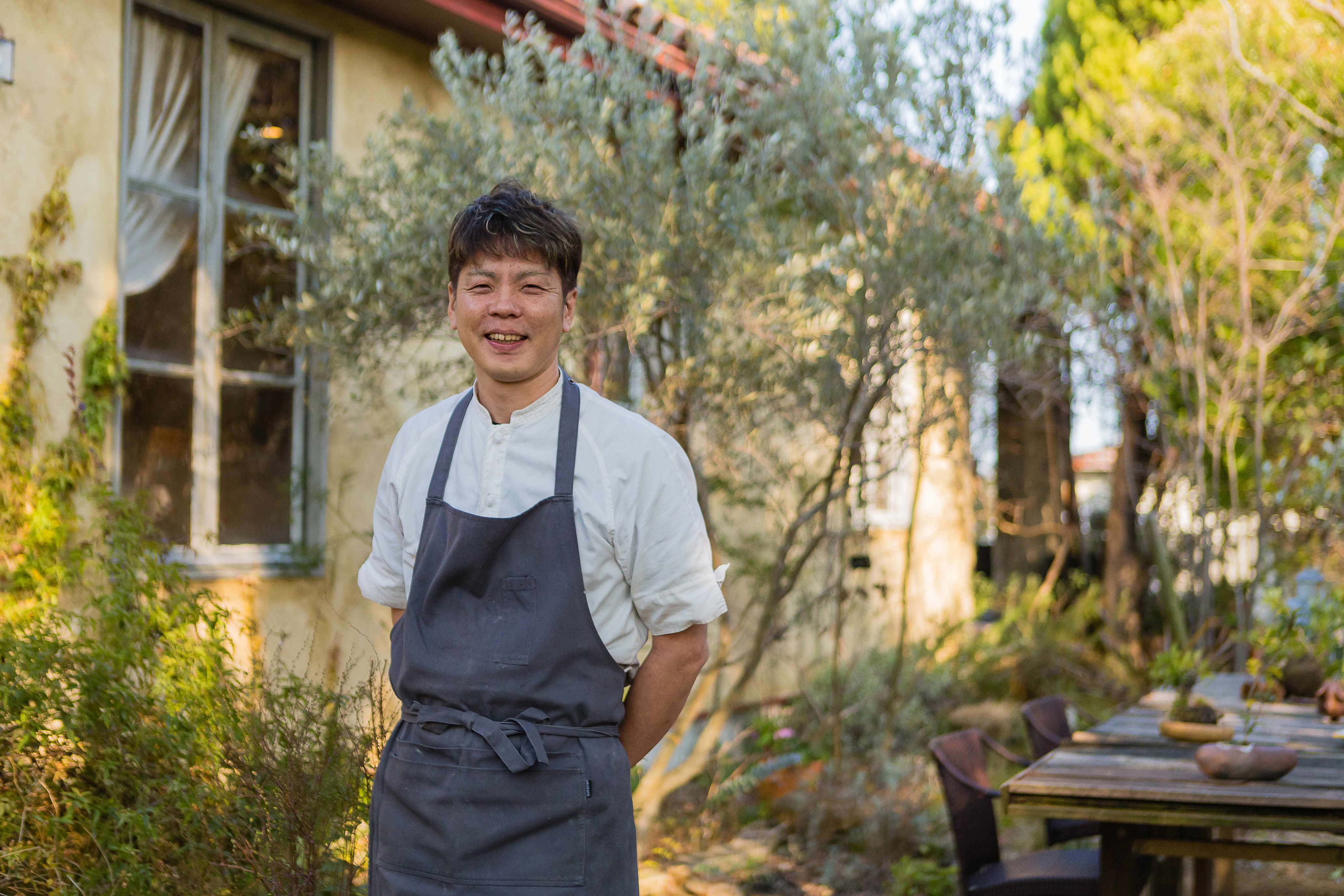 A solitary house-like restaurant, Villa Aida is located in the peaceful countryside in Iwade, Wakayama Prefecture. They serve food which you can experience only at this restaurant. Their unique vegetables and herbs are grown in the backyard by local farmers.  The unique and creative cooking techniques, which bring out the best of those ingredients, have caught the attention of many chefs and gourmands. There are many customers who visit the restaurant from the Kanto region, too. People say that the location is the most important aspect for successful business management in the food industry, but Mr. Kobayashi pursues his originality in a remote area away from the city. I interviewed him about a fateful meeting in Italy and his purpose behind using local ingredients. 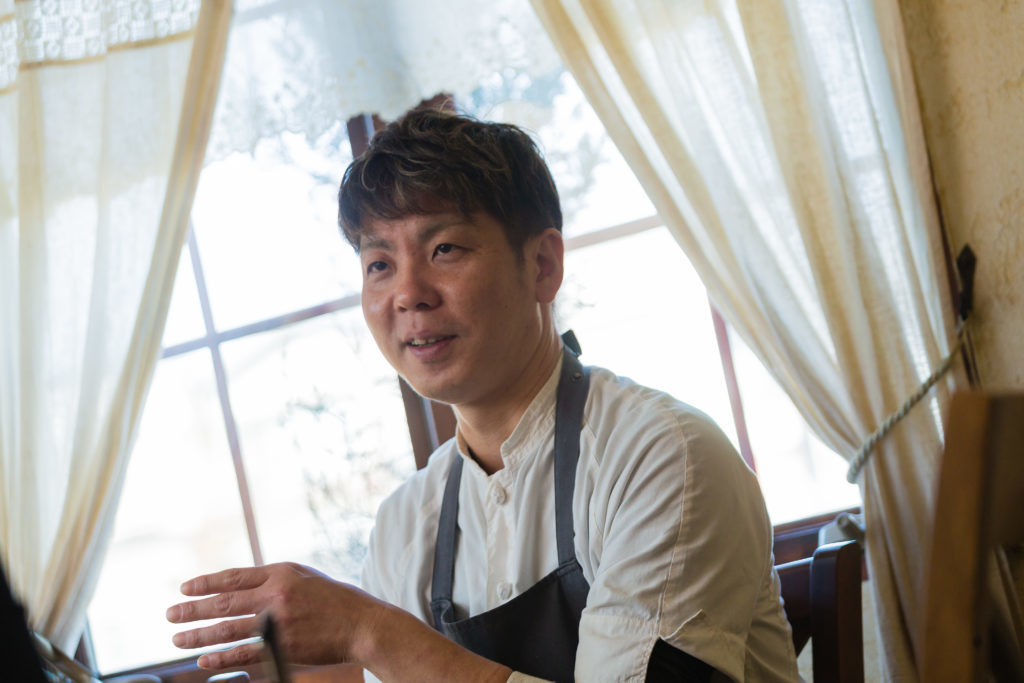 I was fascinated by the excitement of cooking when I was a child, when I loved baking sweets.

Firstly, please tell us how you became a chef. What kind of childhood did you have?

Mr. Kobayashi :
I was born in Wakayama and grew up near the area where Villa Aida is located. When I was an elementary school student, I used to catch frogs in the footpaths between rice fields.
I started baseball in junior high school, but at the same time I was into baking sweets. My mother liked baking western sweets and breads so I also helped her bake muffins or cookies by looking at the books left in the kitchen. I felt regret when it didn’t go well. I remember baking them again when they were not successful. Also, I liked trimming the trees in the garden or painting the wall of our house. I think I really loved not only cooking, but creating something.

When did you decide you wanted to become a chef?

Mr. Kobayashi :
I didn’t really think about becoming a chef. I vaguely thought I would probably want to become a bank teller. However, I realized that I tended to choose food-related shops for my part-time jobs such as a diner, a cake shop, and a bakery… I was not a good worker as a server so I worked mainly in the kitchen. I was happy when I realized I was improving my cooking skills, so I started thinking about working in the food industry in the future. Therefore, I went to a culinary college.

How did you choose the first restaurant you would work at after graduating from the culinary college?

Mr. Kobayashi :
I choose Italian by a gut feeling. At that time, the tiramisu boom was brought to Japan and Italian cuisine was becoming more popular. I originally liked creating something so I was probably fascinated by these creative, colorful Italian dishes.
Also, I wanted to have my own restaurant in the future, so I looked for a small private restaurant, not a large organization such as a hotel or franchise business. I thought I would be able to learn and master the skills for all the duties and learn about business management skills and different points of view.

So that’s how you chose the Italian restaurant in Sakai, Osaka. How was your time as an apprentice?

Mr. Kobayashi :
I didn’t struggle much when it came to cooking skills, as I had acquired knife skills and learned how to handle a frying pan. However, I didn’t greet people well. Therefore, I was always scolded about my attitude. I think I was able to learn how to build good teamwork and learn the basics as a member of society. He was the kind of person who had an artisan spirit and high expectations. I was often scolded and had tears in my eyes. One of my seniors told me, “He scolds you because he knows you are a chef candidate,” so I was able to overcome hard times. 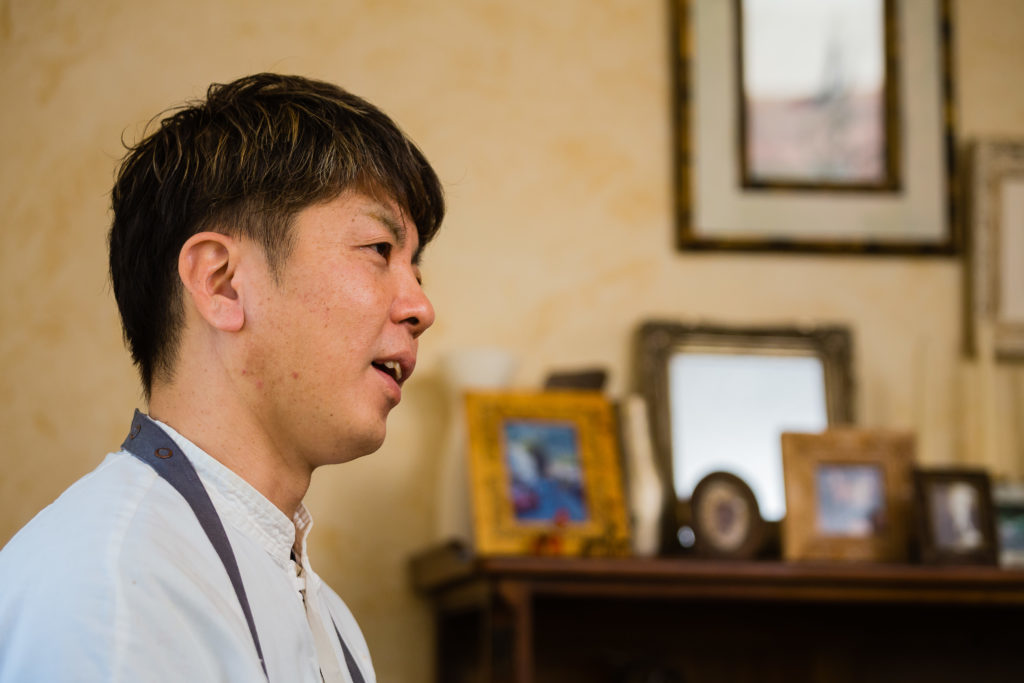 Going to Italy alone at the age of 21, and knowing various local ingredients and dishes

What was your next step?。

Mr. Kobayashi :
I did my apprenticeship for about two years there. It was an orthodox Italian restaurant where we served pizzas and pasta. The main chef was only responsible for heating and cooking. We were responsible for only preparations, no matter what we made, be it vongole or Bolognaise. You can basically remember all the procedures within 18 months. I thought I wouldn’t be able to grow and improve myself any further if I stayed. So I asked the chef to move me to a different restaurant. Then he advised me to go to Italy if I wanted to go to a different restaurant. During the six months left until I quit the restaurant, he connected me with a chef in Italy and told me that I could rely on him.

So the chef admitted you. How was the experience there?

Mr. Kobayashi :
It was in a travel mood the first month, when I went to the language school. When I was introduced to a restaurant and started working there, I suddenly felt homesick – this was at the third month. The restaurant I worked at was located deep in the mountains; you needed to take a train for about two hours from Venice and another one-hour bus ride from the station. I stayed in the restaurant and worked there so I didn’t need to commute but I didn’t speak the language, didn’t know anyone there, couldn’t make a phone call because even though there was a phone, I couldn’t use it and it took about 10 to 15 minutes to get to the nearest pay phone… I was feeling so lonely.
However, I came to Italy on a one-way ticket and had a firm will not to go back to Japan until I had saved money. Therefore, I couldn’t go back to Japan. It was a very hard time for me.

You were only 21 so you must have had a lot of concerns. Did you do other apprenticeships at different shops after that?

Mr. Kobayashi :
In Italy, I did apprenticeships at eight restaurants. I was introduced to the next restaurant by the chef after about six to twelve months, so I was able to see and learn various local dishes. At the beginning, the chef gave me work opportunities, but as I got used to my work I started going out to eat on my days off; so I would find some interesting restaurants and directly asked them to hire me. After a year, I had learned more about life in Italy and the Italians’ laid-back characteristics. I had improved my language skills, too, so I started enjoying my life there. 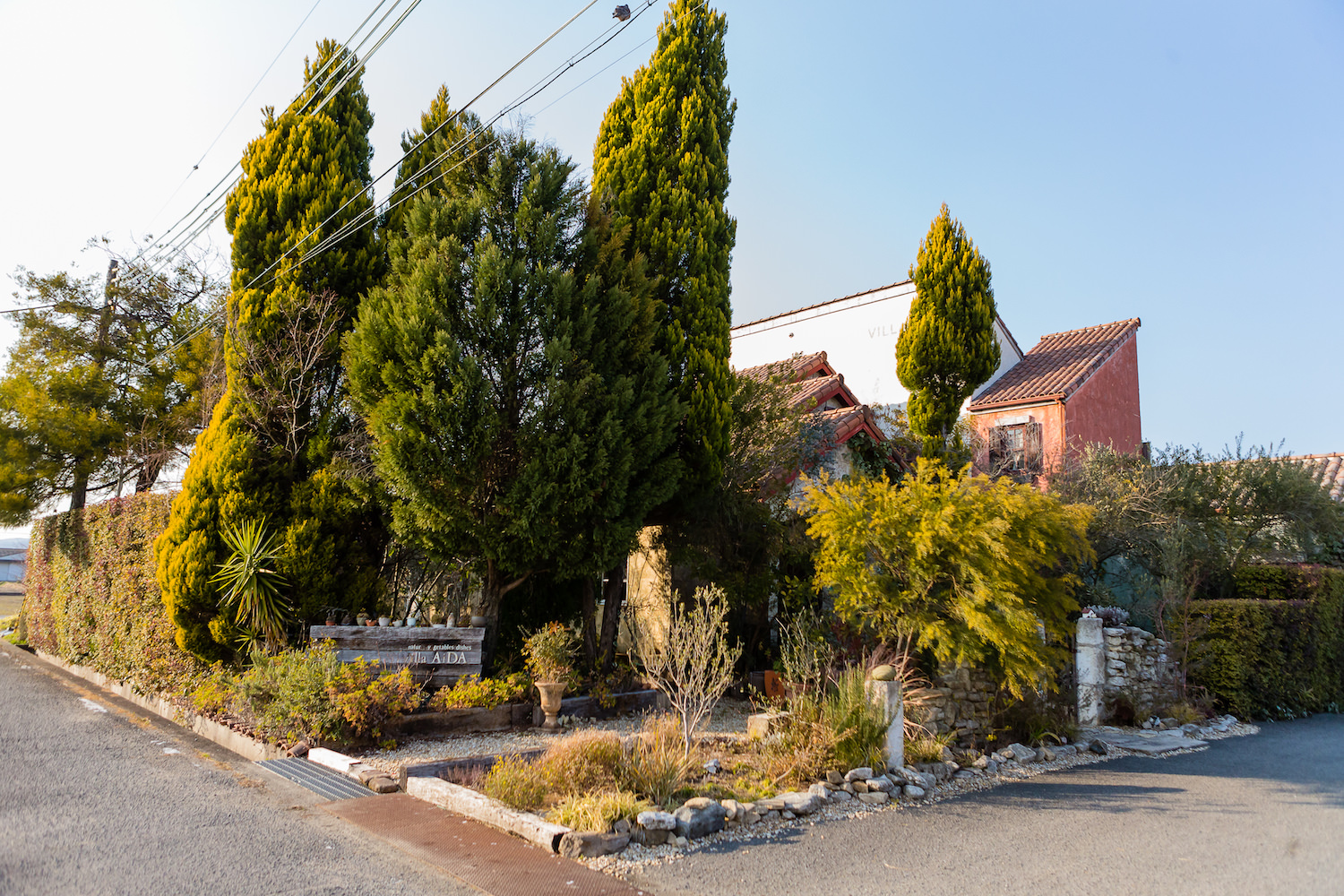