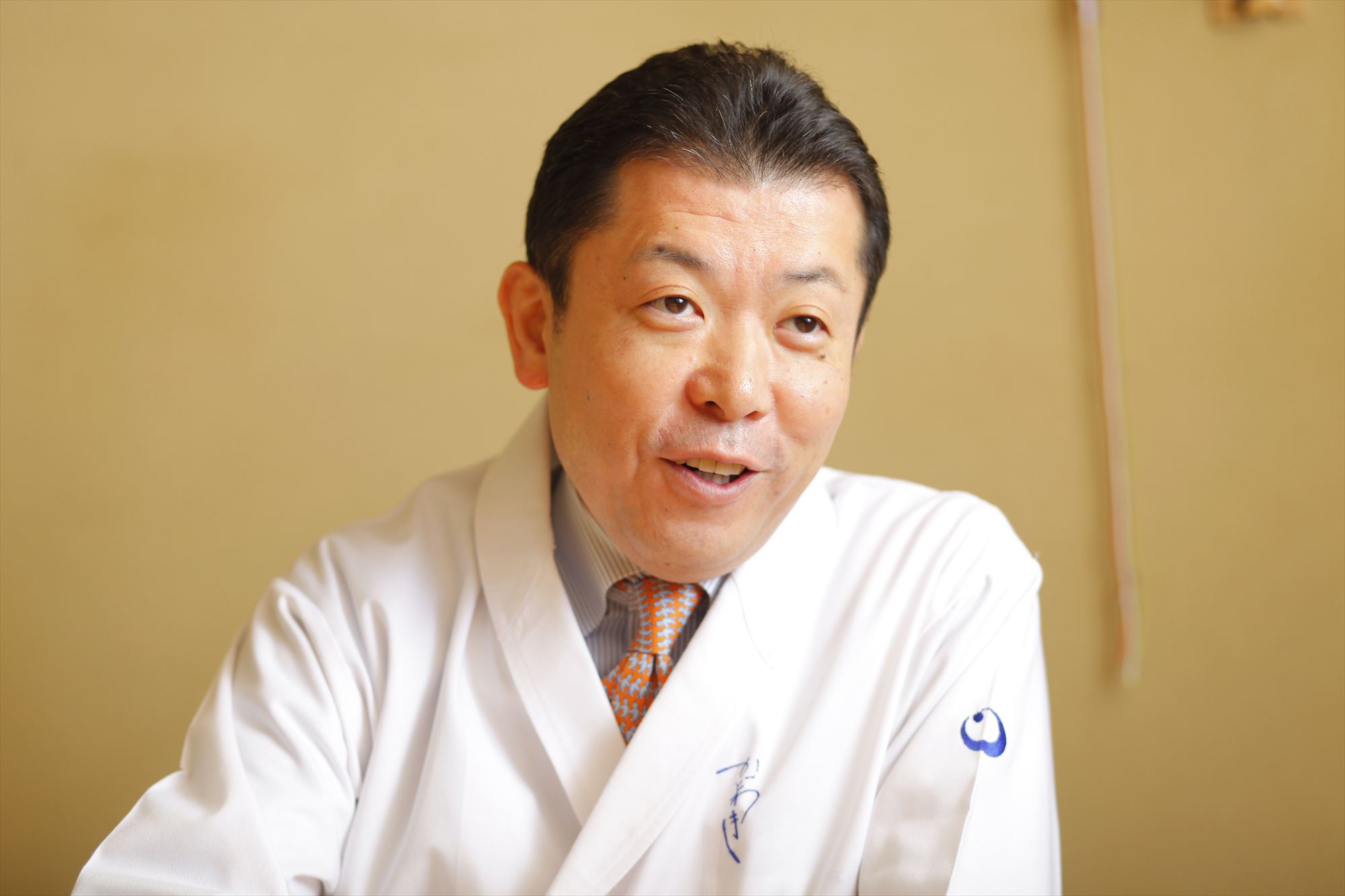 The Japanese restaurant Kadowaki stands quietly on a back street in Azabu-Juban, Tokyo. Its memorable dishes, which include luxurious ingredients such as truffles and foie gras, have won the admiration of foodies, and there are many famous people from various fields among its long-time regulars. There is an immediate novelty to using unusual ingredients, but it is easy for customers to lose interest in such things. However, for the same restaurant to get customers coming back again and again, there is certainly an art to doing creative cooking without making odd dishes just for attention. The owner, Toshiya Kadowaki, trained starting from age 19 at places such as Tsukiji Uemura and Kaientei before opening his own restaurant at 40. Why did Kadowaki, who took the fast track into the world of Japanese cooking, decide to open his own place, and how did he create his current restaurant, Kadowaki? 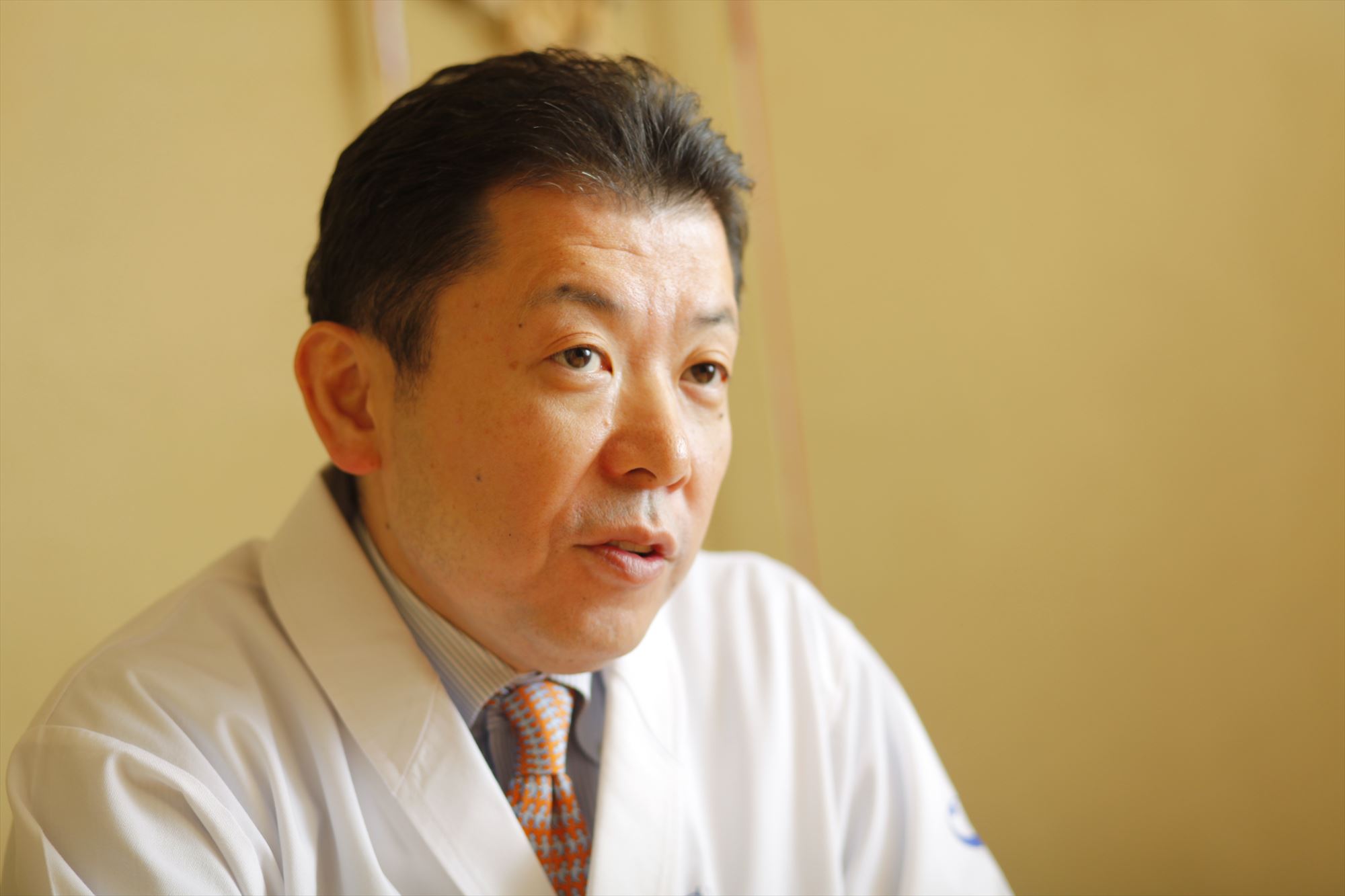 The yearning for top-class sprouted from watching Rokusaburo Michiba, his teacher’s friend.

You originally worked at a Japanese restaurant as part of the accounting staff?

Kadowaki:
That’s right. My parents ran a sushi shop in Hokkaido. But they told me, “We want to expand the restaurant in the future, so you should study management,” so I graduated from a professional accounting school and got a job at a high-class restaurant in Roppongi called Etsu. I may not look like it, but I have top-notch bookkeeping qualifications.

That’s true! At first, were’nt you considering entering the cooking world at all?

Watching my parents, I thought working on your feet seemed really tough. I was young, and was attracted by the showiness of the world, and thought I wanted to try restaurant design. But when I started working at Etsu, I was told, “In order to manage, you have to know what’s happening on the scene. We’re not joking—we want you to help in the kitchen for three months.” It’s true that for management, it is important to grasp the situation of working conditions and food management. I was convinced by their logic, and started working in the kitchen for what was supposed to be only three months, but in the end the joke was on me… (laughs)

Did they anticipate your talent as a cook?

Kadowaki:
I wonder. For the first three months, I did mostly assistant work like running errands and cleaning, without doing any cooking at all. But I had been helping my parents since I was a child, and my mother always told me, “You have to work quickly and do the basics well,” so I was always trying to figure out quicker ways to do the things I was taught. The head chef noticed that. In my third month, he said, “You have a talent for cooking, so why don’t you stay for another year?” I was also feeling that way a little, so I thought, “I’ll do a year, and if I backtrack, I’m only 20,” and began with learning how to hold a knife; when a year had passed, I was being entrusted with the same work as those who had been training for three years.

So then did you think you could earn a living in that world?

Kadowaki:
Yes. But I was still attracted to more modern and showy work, and I had not made up my mind. Then, Rokusaburo Michiba, a friend of my teacher (Fukuichiro Motegi, who worked as an advisor at Etsu), came to visit the restaurant. At that time, Mr. Michiba’s restaurant, Rokusantei, was already established as a well-known place. I watched him ride up in his bright red Benz and stylish clothes and ask my teacher, “Doing well?” and thought how cool he looked. Suddenly, I had my goal: “So this is what it means to be top-class in Tokyo. I want to be top-class too.” And I began to work seriously on my cooking. 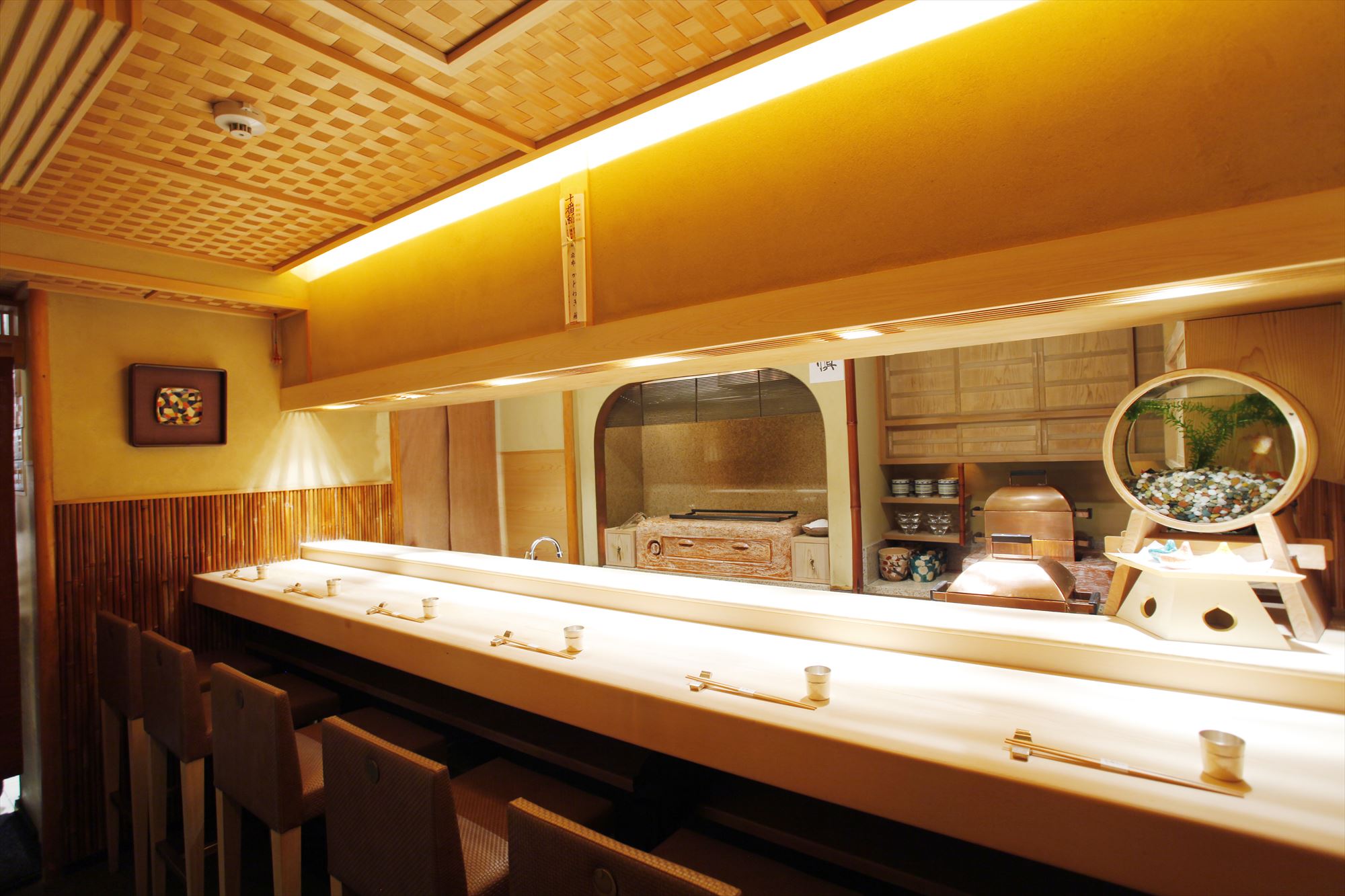 He gained experience with the chef of Tsukiji Uemura and trained at Esquire Club, and also learned restaurant management.

After training at Etsu for two years, he moved to Tsukiji Uemura. He trained under the chef of the head shop, Fukuichiro Motegi, and then became the chef of the Nishinippori shop at age 27.

How was it to work as a chef for the first time?

Kadowaki:
I sensed a great obstacle. When I was second in command, my job was to convey my teacher’s ideas to everyone and accomplish his goals, but as chef, I had to convey my own ideas. I realized how much I had been depending on my teacher up until then. When I became a chef my teacher told me this: “The most important thing for a chef is self-improvement. In your 20s you learn technique, but in your 30s you are asked to combine the things you have learned to see if you can make something of your own. Everyone has a different talent for that, but how you train yourself will make a difference in your 40s.” As a chef, from the standpoint of directing others, I really felt the weight of those words.

After that, you moved to Esquire Club at age 29. You were no longer in a chef position there. Why did you go so far as to quit your chef position before starting there?

Kadowaki:
Esquire Club was the first high-class membership club, and the manager, Toshio Yamamoto (currently president of Japan All Professional Cooks Association), had shown his talent as the head chef of Nadaman in the Imperial Hotel, and had been a fellow apprentice with Rokusaburo Michiba. At that time, around 1980, it was a restaurant which produced cutting-edge Japanese cuisine. Also, besides Esquire Club, the parent management company, Daiwa Jitsugyo (now Daiwa Exceed Co.), was very successful with nationwide chains such as Yagurajaya and Asian Kitchen, and was recognized as a leader in the restaurant industry. I had learned working in the traditional high-class Japanese restaurant Tsukiji Uemura, so next I wanted to broaden my experience by training as a chef at a new-style restaurant.

Was the work style different?

Kadowaki:
Yes, it was. At Tsukiji Uemura, only the head chef knew about the monthly sales figures, and the cooks were not really involved in management. However, at Esquire Club, it was considered natural that the cooks would be aware of those figures. Financial statements like the sales sheets and purchasing sheets were passed around to the sous chefs and up, and we were asked to manage the numbers. For the first time, the accounting knowledge I had from professional school came in handy. When I read the financial statements, my coworkers were surprised and asked, “How do you know about this stuff?” Thanks to the opportunity to learn about shop management in a company in the restaurant industry, I was later able to work for the Toh-Ten-Koh conglomerate as the chef of Kaientei, and when I opened my own restaurant as well, there weren’t too many things that were confusing. 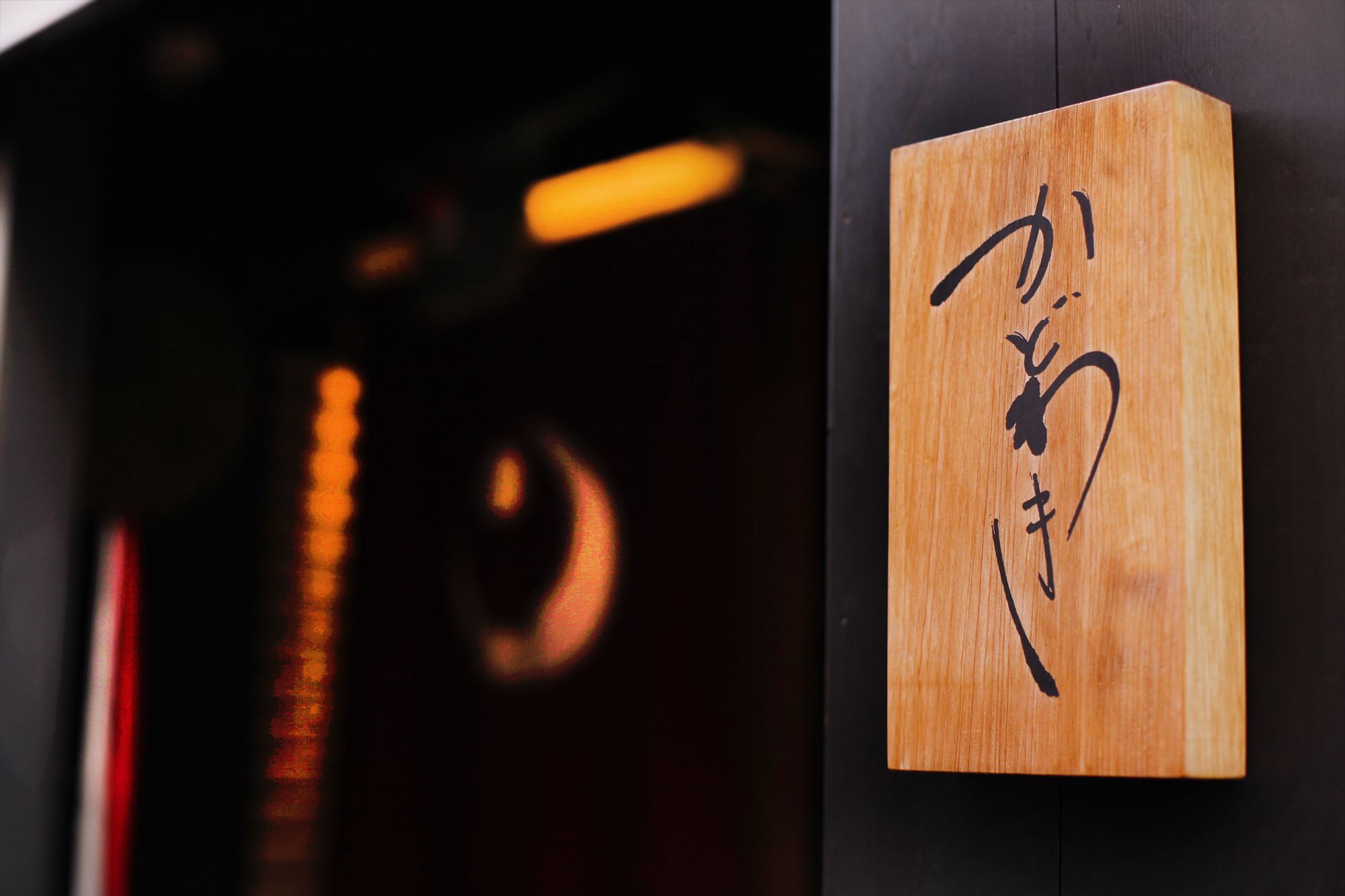