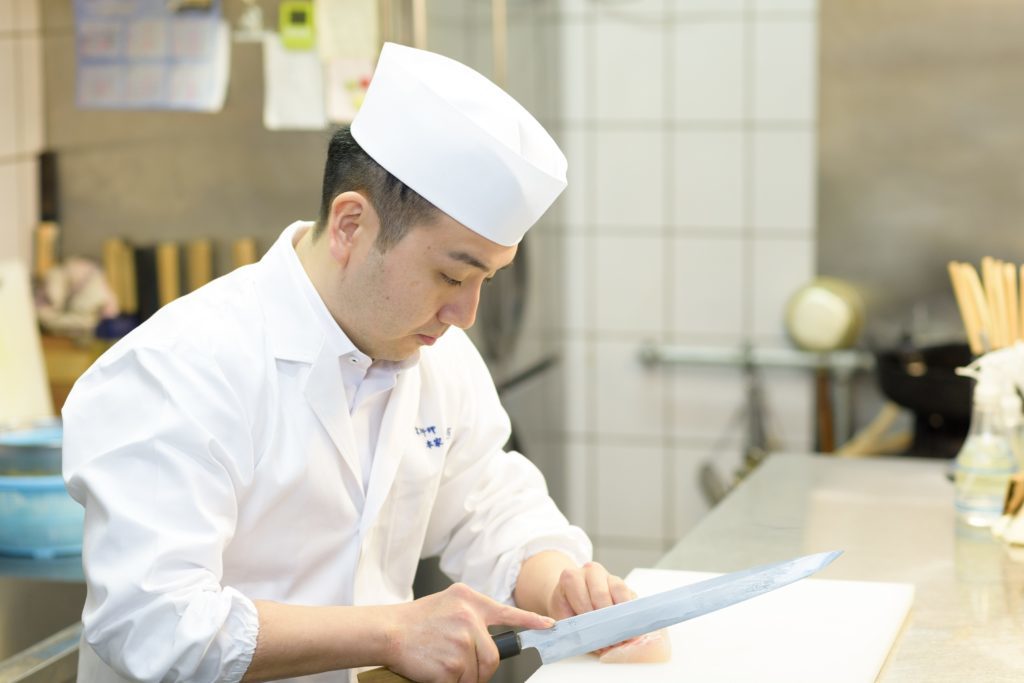 Professional chefs are people who can create the same taste uniformly.

So now, you create the menu with your father and take initiative in the kitchen. Please tell me what you are particular about when creating food.

Mr. Kurisu:
Professionalism, I think, is keeping the same taste each time. This is the difference between professional cuisine and home cooking. I think cooking is such a unique talent. Even if you use the same ingredients and add the same seasonings, you can’t necessarily make the same taste. The taste buds of your tongue are very important. Kakiden”s head chef said “Good enough is always good.” I thought it was very deep. When adjusting the taste of soup, I stir in salt and taste again. If the salt is not enough, I add some more again. A proper amount is very important. I actually learned a lot when cooking staff meals. Although I was able to work in the kitchen at the end of my training period, I was mostly in charge of preparing staff meals, since most of my co-workers were seniors during my three-year training period. By cooking the leftover ingredients in a limited time, I was able to learn the procedures and seasonings. People tend to ease up on this job but it is not something to be taken lightly. In the beginning when I was not really used to preparing staff meals, I used to ask my seniors, “How many ccs of this should I add?” However, they always told me “It’s OK as long as you remember what seasonings to use. Learn the balance of the taste with your tongue.” So, I studied very hard on it. As a result, my seniors told me the taste of my dishes is always consistent. I was very happy when they told me that.

Now I understand what you mean by uniformity. There is no set amount; you practice with your tongue.

Mr. Kurisu:
For example, if we are not able to get fresh fish because of stormy seas, we add a bit more salt to firm them up and use a lot of sake during cooking. Even for root vegetables like taro, we add salt if there is not enough sweetness. Depending on the condition of the ingredients, we change the way we cook. We need to listen to the voice of the ingredients using our sixth sense.

I see. So a sixth sense is the sense that tells you how to adjust to achieve a goal. Is this something that you have by nature or can it be acquired?

Mr. Kurisu:
Yes, you can acquire it. But if we’re talking about ages, I think it depends on how much you absorb the skills and senses by interacting with good food before the age of 30, which is the age that people’s character formation is done. In this meaning, I think I was very fortunate to be able to interact with composite art by seeing and touching serving dishes, flower arrangements, calligraphy, or tea tools. It became a great asset for me.

Nowadays, a counter kappou restaurant, a traditional Japanese space, is very popular among young people because of its gorgeousness and style. However, I don’t want them to lose sight of the essentials. The extent to which you learn the standards of cooking in your apprenticeships will become a very important element in your chef life. I hope the younger you are, the more standards and methods of cooking you will learn. 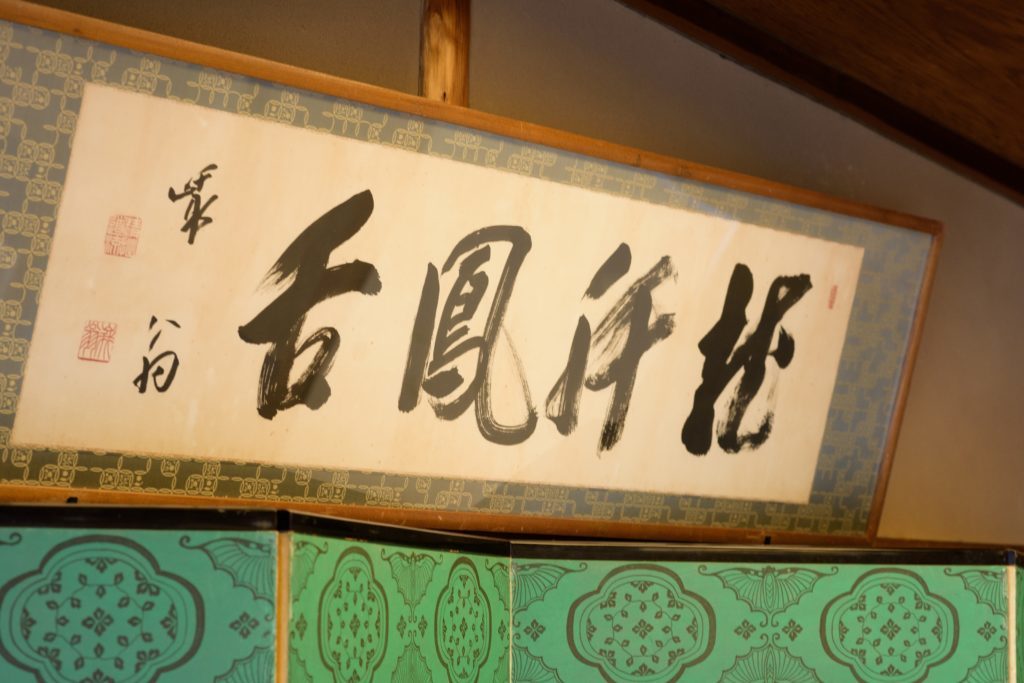 The power of Japanese cuisine to entertain people from all over the world equally.

When it comes to traditional Japanese cuisine, I heard that recently many foreign apprentices train in Japanese restaurants in Kyoto.

Mr. Kurisu:
There are several restaurants in Kyoto. Sometimes we receive offers at Tankuma, too. Actually, I am very interested in the foreign countries. When I was in college, I was a backpacker. I love travelling. I especially have an interest in the Silk Road. I perform as a Hayashikata, which provide the musical accompaniment at the Gion Festival. Yamahoko, the tapestries hanging on the festival floats, were made of Persian carpets in the Muromachi era. I became very interested in their roots. I can’t still believe it now, but Syria was such a safe country at that time, even when the civil conflict was going on. I traveled to over 70 countries by myself, including Syria, Lebanon, Jordan, and Africa.

So, is there any part of the experience that helps you in your current job?

Mr. Kurisu:
While traveling around the world, I became fond of Arabic countries. They cherish their families and eat together. They also think it’s important to be modest. I felt a similarity to the people in Kyoto. They have an atmosphere of nostalgic Japan in the Showa 1930s. People were very kind and guided me around the area during my trip. They welcomed me to the country. This experience made me have an affinity to the Arabic culture. I received a Halal certification from the Kyoto Halal Association three years ago. The number of tourists from Muslim regions started growing three years ago, and I heard that the religion of most Arabic people is Islam. There are a lot of strict rules so they usually brought cup noodles from their home countries and ate them in their hotels because they didn’t know what kind of food they might find in Japan. They come to Kyoto, which is known as a gastronomic city, and it is a shame for them not to be able to enjoy it. I was able to enjoy such a great time in Arabic countries thanks to such fun and warm people, but they can’t do the same in Japan. I thought it was rude to ignore that. Therefore, I started studying about how I could create Japanese Halal cuisine.

It must have been very difficult for you to achieve it, dealing with a lot of limitations.

Mr. Kurisu:
Based on the rules we can’t use pork, but we mainly use fish and seafood in Japanese cuisine so I realized it was an advantage compared to the cuisine of other countries.

The difficulty I faced was that I was not able to use sake and mirin – the sweet cooking sake in mirin has alcohol in it. On the other hand, I found out that I was generally able to cook Japanese Halal cuisine if I avoid using these two. Originally sake makes ingredients softer and cleans away the smells. If so, I thought about its roles and how I could utilize alternatives. I could use ginger or spring onions to clean away the smells, and use broths and pressure cookers to achieve tenderness. Mirin, the sweet cooking sake, is used to add sweetness and a glaze to food and to make boiled foods milder because their tastes are usually too pointed with only salt and soy sauce. Given that, we can add a little amount of sugar for sweetness and syrup for glaze, instead of using mirin. Actually, I had a chance to cook yuan-yaki, a grilled fish fillet marinated in soy sauce, mirin, and sake, Halal-style using alternative seasonings. The taste was very similar to the original yuan-yaki so even Japanese people said it didn’t taste any different. I got good feedback.

There may have been a lot of difficulties until your major accomplishments, but it is great that you can deliver quality Japanese cuisine again. Is this a trend in Kyoto?

Mr. Kurisu:
No, I do this because I have interests in it personally. If travelers come all the way to Kyoto, I would like them to taste Japanese cuisine. I also think it is how I show my gratitude. However, I recently had an offer from a hotel and am now studying Japanese cuisine that can be made not only Halal but also Kosher, which is a commandment of Judaism.

So when people who are Muslim or Jewish come to this restaurant, they can all enjoy food together.

Mr. Kurisu:
It is my dream. Japanese cuisine has an attractiveness as a cuisine that can be accepted in the world`s many religions. Even if Israel and Arab nations fight a conflict, I think they could share a sense of peace through food when they come to Japan. I may be able to be the bridge between them. I realize that Japanese cuisine has great possibilities that can be enjoyed by everybody equally. Food-driven culture integration is seen in many places, such as China’s Manchu Han Imperial Feast. 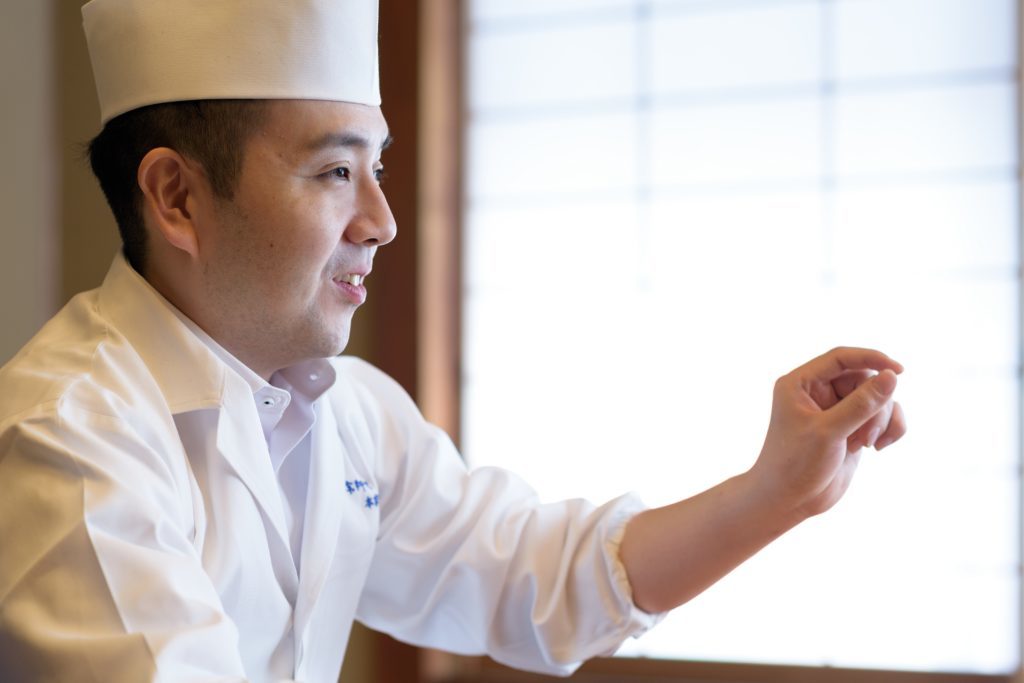 Good relationships are developed by taking care of the harmony among people. This is also what creates good food.

Finally, could you tell me what you cherish about making a good restaurant?

Mr. Kurisu:
I can describe my restaurant’s atmosphere as “at-home.” We share everything, such as souvenirs, with everybody, from the servers to the kitchen staff. Maybe it is how people from the Omotesenke world treat us, the regular folk – by bringing souvenirs when we go to tea ceremonies or Hatsubon, the first Obon after death.

I learned a lot from the patriarchs who cherished the importance of equality and harmony among people as a result of honoring hierarchical relationships. I think good food can be created if you take good care of your teamwork and work environment.

Is there anything you consider particularly important that motivates and improves staff members?

Mr. Kurisu:
It is about sharing equally with everybody and I always teach openly about anything I can.

When I thought about why my seniors from Kakiden were always willing to teach me so much, I think they had a strong confidence that people would never be able to mimic them. Even about tiny little things such as mixing the same amount of seasonings, each one of them can show their colors through cooking and their uniqueness. I think it is one of the most interesting parts of cooking. If you can receive a professional chef’s recipe and you can make exactly what is written, there would be no restaurants in this world. However, there is a definite difference between professionals and amateurs. I teach everything to young chefs with equality but there is always a severity behind it. How they pursue the tiniest of differences from there, and how seriously they confront cooking, are important. I would like to communicate the importance of effort in developing a sixth sense to be successful as a professional chef. 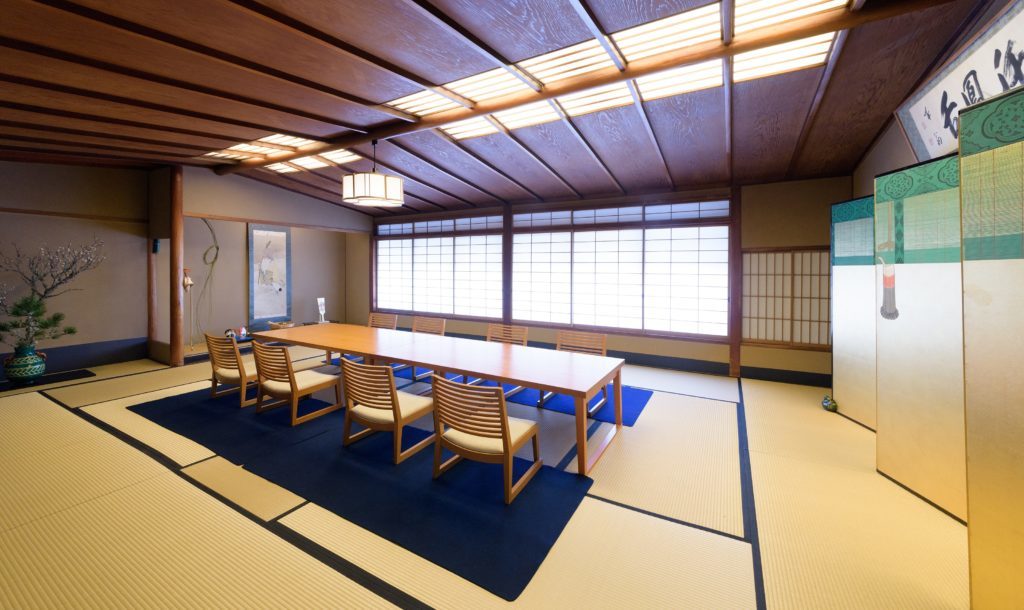 “That's why cooking is fun.” During the interview, I don't know how many times I heard this sentence. There are so many different ways to cook simple, old-style cuisines. Depending on the temperature and humidity, or the condition of the ingredients, he changes the type of preparation or cooking time in minute detail. He says there is always a new discovery in dishes he has cooked so many times. Mr. Kurisu is very proactive towards innovative ideas such as Halal Kyoryori. He also strives toward providing internationally recognized service, and has earned the qualification of J.S.A Sommelier. He comes up with ideas one after another. During the interview, I felt that he really enjoys his job, from the bottom of his heart.
Prev Page
Next Page 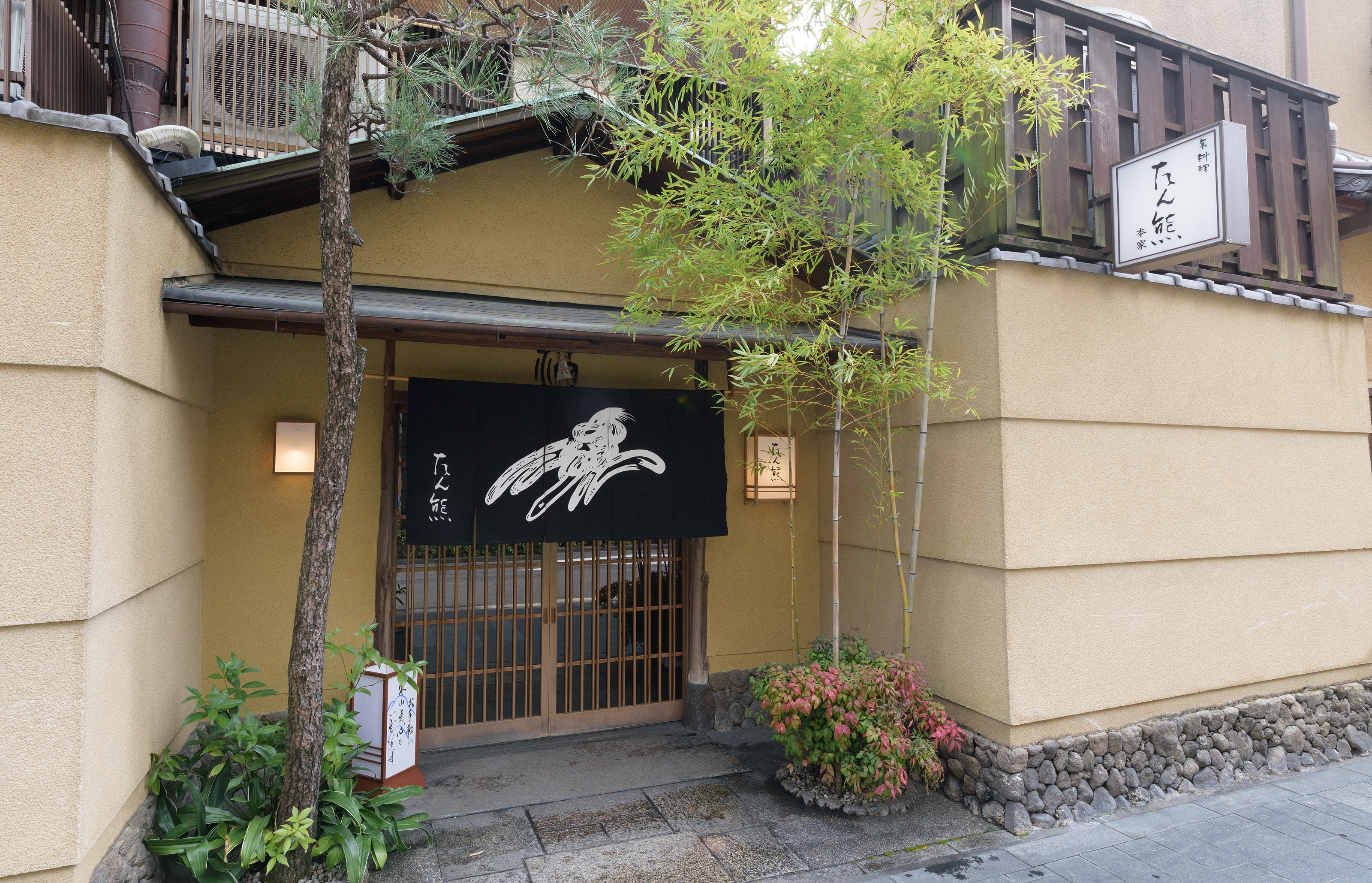