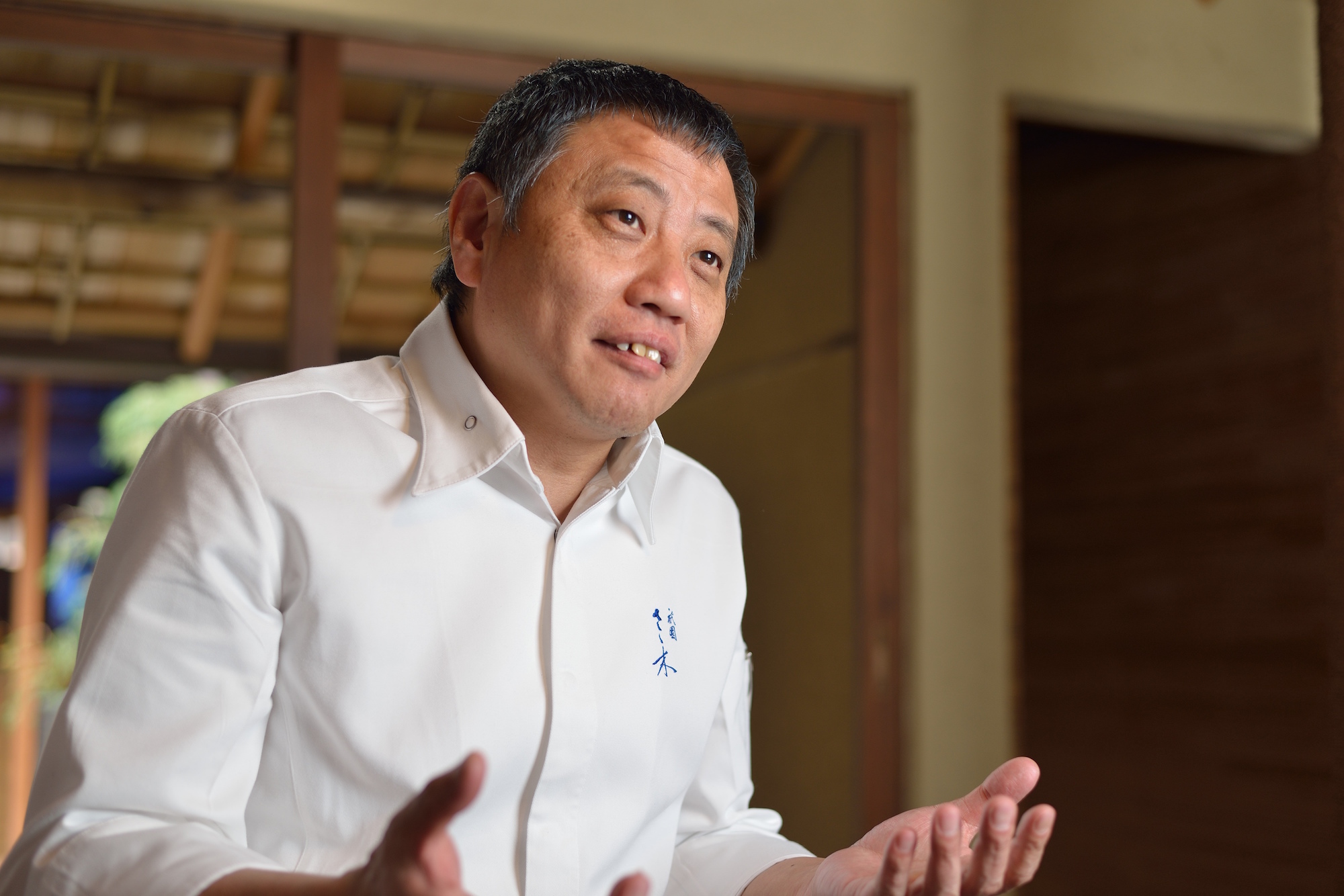 Gion Sasaki is one of the standard-bearers of the Yasaka-dori area in Kyoto, where numerous famous establishments line the streets. The luxurious cuisine makes use of an impactful dashi broth and the finest ingredients that transcend countries and contexts. In addition to antique vessels and a neat interior, there is even a pizza kiln, in front of which a 10 meter long single plane of wood functions as a counter on which amazing culinary performances accompany the tales of raconteurs. We might call this the veritable “Sasaki Theater.” Gion Sasaki has effortlessly captured fame for years, acting as a creative enfant terrible that has challenged notions of what Kyoto-style Japanese cuisine means. We sat down with Hiroshi Sasaki, the star player and master of ceremonies here, to ask about his life lived through cuisine and about his commitment to the shop. 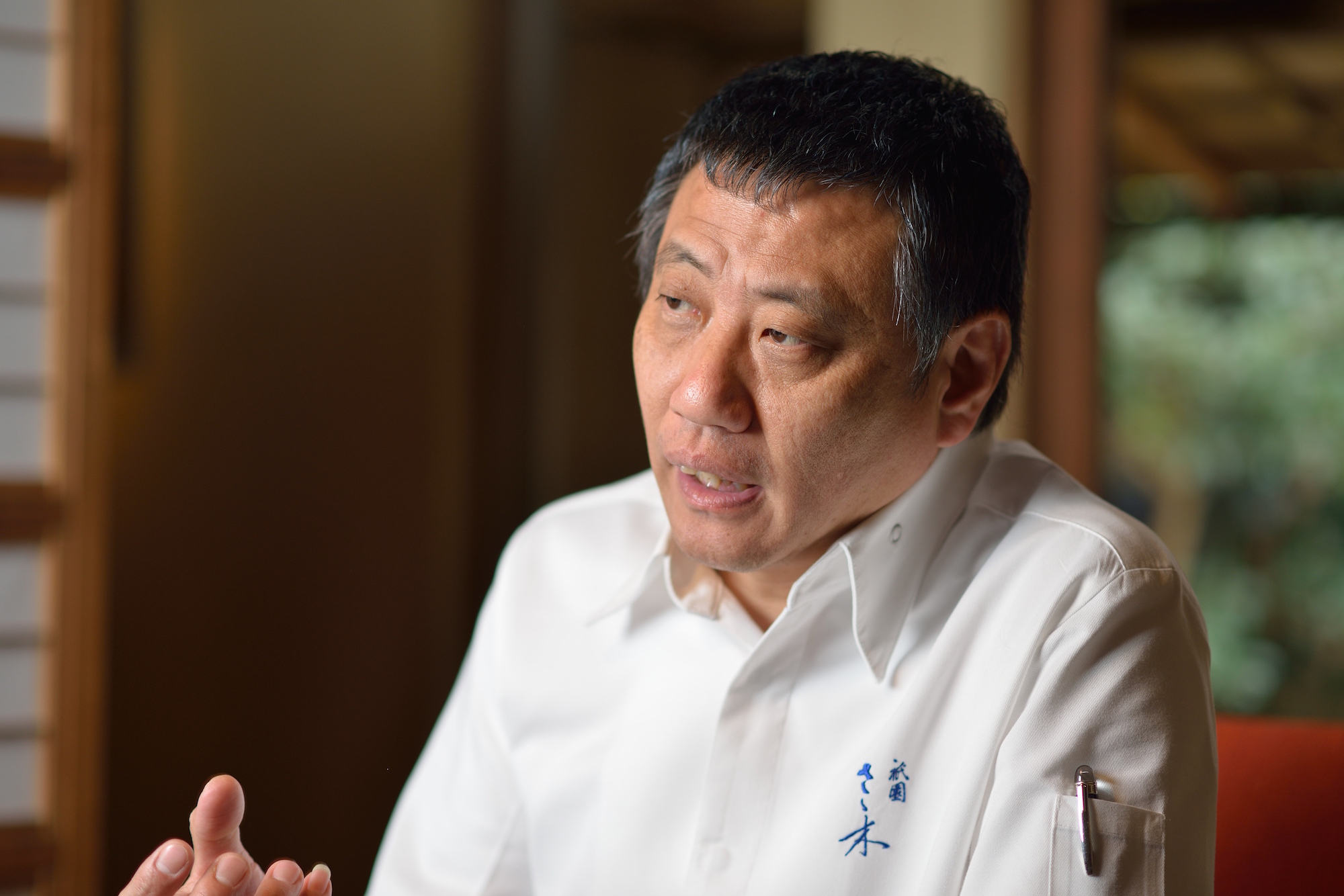 Choosing a life of cuisine as a means enriching others’ lives

Were you interested in going into the culinary arts from a young age?

Sasaki:
No, nothing of the sort. I wanted to be a pilot when I was a kid. I guess all kids dream this way.
My family had been in the business of catering since my grandfather’s days, and my father had a traditional Japanese establishment, with my uncles and cousins running sushi restaurants, traditional inns, et cetera. Basically, everyone in my extended family was involved in cuisine.

Both my parents worked, so I was latchkey child. My home became a hangout for my friends. I guess I was a bit of a ruffian back then (laughs). They would ask me to make them food from what was in the fridge — fried rice, Hamburg steak, and the like. This drew more people, and they told me it was delicious. I realized that I had the skills to bring joy to others, so I resolved to become a chef.

Were those dishes that your family had taught you how to make?

Sasaki:
No, it was more something I picked up by watching, something I mastered in my own way. I had grown up watching my family cook, so when my friends said they were hungry, I just casually proposed the idea.

Plus, I was obsessed with hi-fi stereos back then, so as a student, I had stacked up loans to buy that gear. As a result, I worked at my relatives’ restaurants to make spare cash. That’s where I learned how to wash amberjack and create Japanese omelets.

After graduating from high school, I went to train at Rinkoan, an inn and restaurant in my hometown of Shiga. This was around 1980. 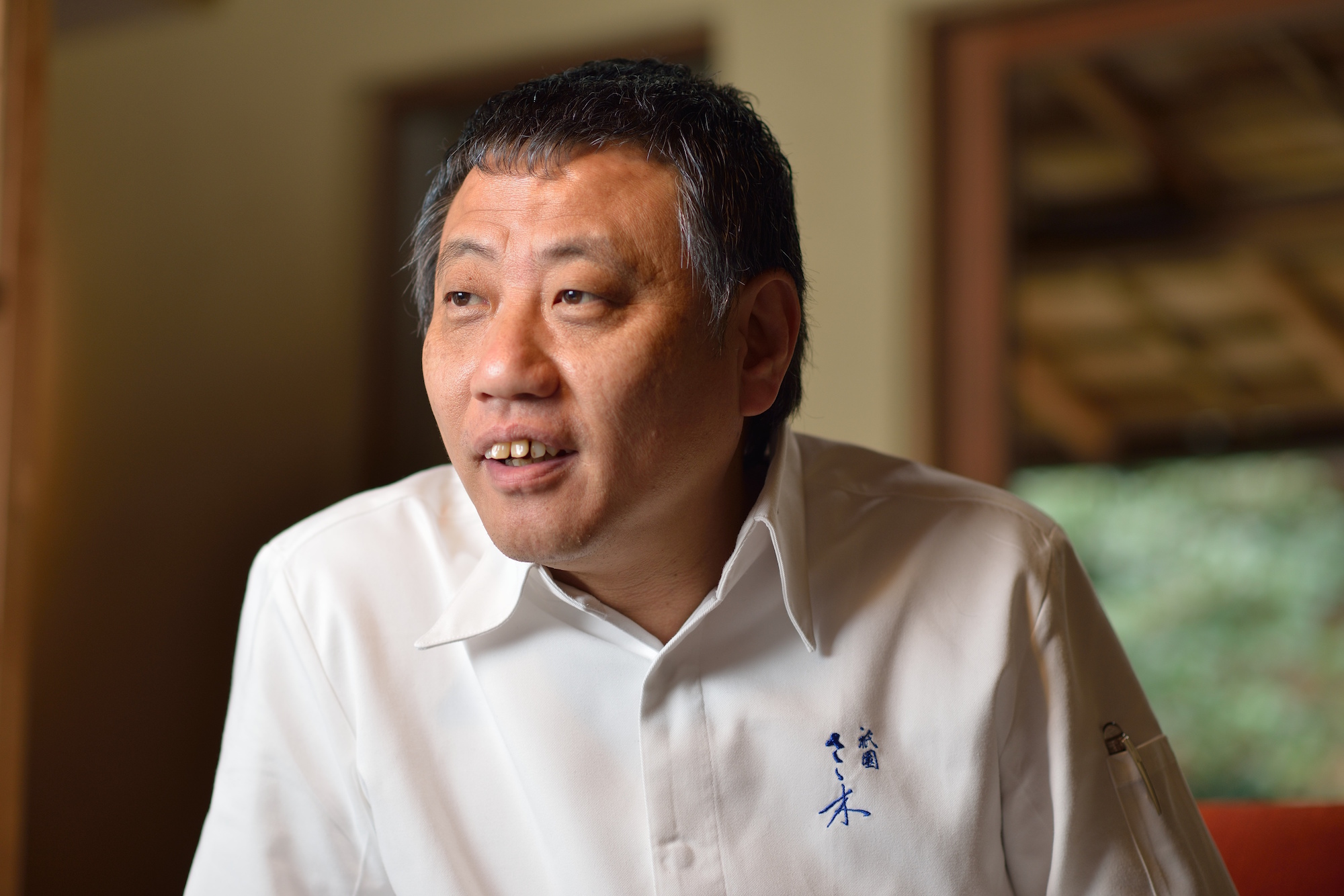 Days of waking up at 3AM to work, and then on days off, overtaking his senior colleagues

So you weren’t pressured by your family to go into the world of cuisine. It was something you naturally fell into. What were those early days like for you?

Sasaki:
As a newbie, you obviously have a lot of grunt work to do, but since I came from a family of cooks, when they told me to go fetch water pepper, wheat gluten, and the like, I knew immediately what it was. I decided to use that to my advantage and strut around like a leader, so I handled a ton of things early on. I take the lead, and things reach a conclusion faster, after all.

When you say you took charge, was that in terms of your senior colleagues, too?

Sasaki:
Well, going over their heads was impossible at the beginning, obviously. I have a prideful streak, so I always had this idea that I had to overtake my three-year-old superiors.
The culinary world is a very hierarchical, so trying to get the edge on them meant I naturally got some blowback. I wanted to tread that line to the fullest, so I had to work like crazy.

I would set my alarm to wake me at 3 AM, when the others were still sleeping, and head to the kitchens where I would filet eel and prepare stringed radish. If someone whose position I was vying for took a day off, I could strike early and do their work, at which point my superiors would notice I had the chops. “You think you know your stuff, do you?” they would say. And I’d show them, to their surprise. They increasingly handed off work to me. As a result, a position that would have taken at least 3-5 years to master took me two and a half, at which point they told me I could move to a new shop to train at — I had mastered everything.

On days off, I would ask for permission to go train at other restaurants, taking my whites and butcher knife and asking them to let me help them out. My thinking was that those immediately around me were my rivals, that my mission was to surpass them. When I saw people who worked more efficiently than me, I felt like I still had more to learn. I would go home and practice my skills in the wee hours. In any event, this was more than just a spot of training on days off — I treated these visits as though they were away games, with my mission being to best everyone. I would also get up early, go to the market, ask them to let me handle the fish, etc.

You would make the rounds of other shops and try to beat them on days off? That’s amazing! So this unstinting effort saw you climbing the ranks at the shop?

Sasaki:
Well, luck may have played a part, but I became the sous-chef at age twenty-four. Which meant that there were people under me who were twenty-six, twenty-seven. Since they were older than me, I had to curry favor with them while still leading the charge. I still hadn’t had much experience, so I harbored a lot of stress.

We often hear about chefs in their thirties and forties being put in a position above those older than them, but twenty-four is very young! What motivated you through all of this?

Sasaki:
I was thinking of getting married at the time. If you don’t become sous-chef, you can’t get a good wage to raise a family. Sous-chefs get stable wages, and you can change jobs and carry that resume with you, which translates into good wages again. I had resolved to propose to my sweetheart once I became sous-chef. That was all that was on my mind at the time — becoming sous-chef.

I always had a very competitive personality, about everything, really. You might call me vain.