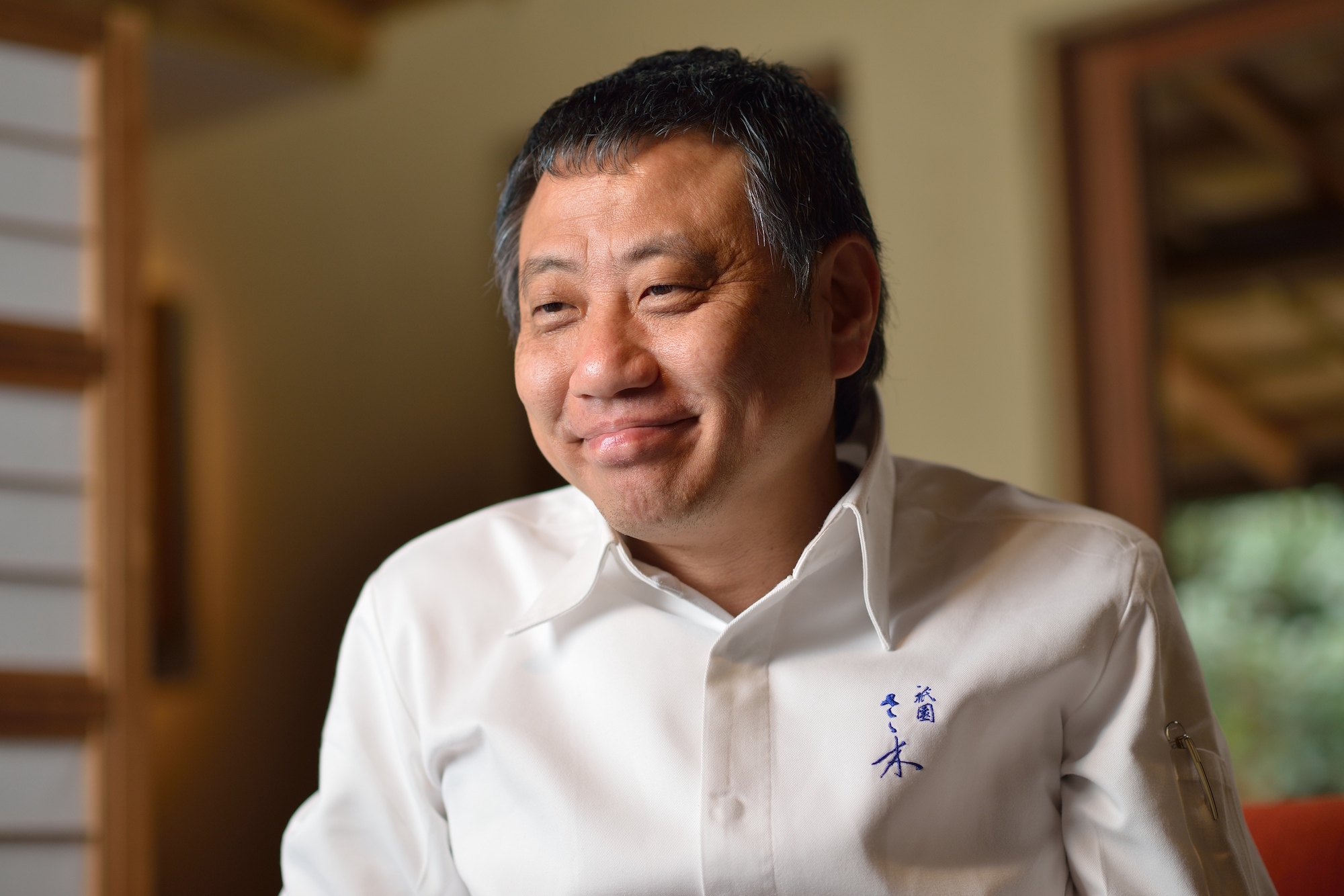 What are your future dreams for Kyoto cuisine as a whole and for yourself?

Sasaki:
I may be repeating myself, but going fully experimental will not do with Kyoto cuisine, so you must rely on the basis of tradition to deploy originality. I want to expand the culinary repertoire of Kyoto cuisine in this way. I’d like for the next generation to then pick up from where I leave off.

I want to see those who are training with me today succeed in their own way. That’s true of all of them — both the ones in a position to go solo and those not yet ready. To that end, I want to create the system I talked about earlier. If we can achieve that, then my last shop will be an okonomiyaki savory pancake shop with my wife. She has borne a lot of grief living with me, so I want to be able to say, “Hey, let’s close the pancake shop today and go for a drive.” I’d like to enjoy that kind of life.

Sasaki:
Paris is like Kyoto. Last year, I collaborated with Thierry Marx of Sur Mesure at the Mandarin Oriental, and I went to Paris four times. I’ve been going there for seventeen years running. When I went for the third time, I really felt how it resembled Kyoto in that they don’t open up to non-Parisians at first. There are gates in front of apartment complexes — not unlike the walls you see in front of better homes in Kyoto. Paris is also a culinary capital, and French cuisine and Kyoto cuisine have their traditions. And yet, there are few authentic Japanese restaurants in Paris, so I feel we need to convey Kyoto culture there.

I have a lot of offers from places like Singapore and China to fund shops there, and I went to visit New York. But my feeling is that it has to be Paris. I have no intention of trying to turn a profit. I just want to go head-to-head with the historic capital. I have lots of friends there, and they would support me. I don’t have anyone to send to Paris, though, so I’m thinking I would close Gion Sasaki and go myself.

Mr. Sasaki is a real rock-n-roller of a chef. His vitality is evident both in his shop and his lifestyle. Drawn by his energy, people flock to the shop to experience his cuisine. He says that in his youth, he had almost too much of this energy to know what to do with.

Following inspiration from his master, he shifted from a life of showmanship, fighting, and constant self-improvement to one focused on operating the shop and training a young generation. This episode showed us how much of a turning point in the life of a chef it is to meet with a master teacher.

It is for this reason that Mr. Sasaki is serious about training the young chefs in his roost. Toru Kitagawa, chef and owner of Oimatsu Kitagawa, is one of Mr. Sasaki’s apprentices who went solo. He described how, when he fell ill and was unable to take up his knives, Mr. Sasaki continued paying his wages. In these Foodion interviews, Mr. Sasaki’s name came up numerous times in talks with the other chefs. He is, in effect, a chef’s chef.

His consideration for the importance of interpersonal relationships is a testament to his depth of spirit and, we felt, one reason why Gion Sasaki has been beloved by so many for so long.

His unflagging vitality will surely allow him to create his next dreams before long: a system for stable employment of chefs, a shop in Paris, and a Michelin star -- or two, or three.

With all this activity, it seems his savory pancake shop may just be delayed a bit longer.