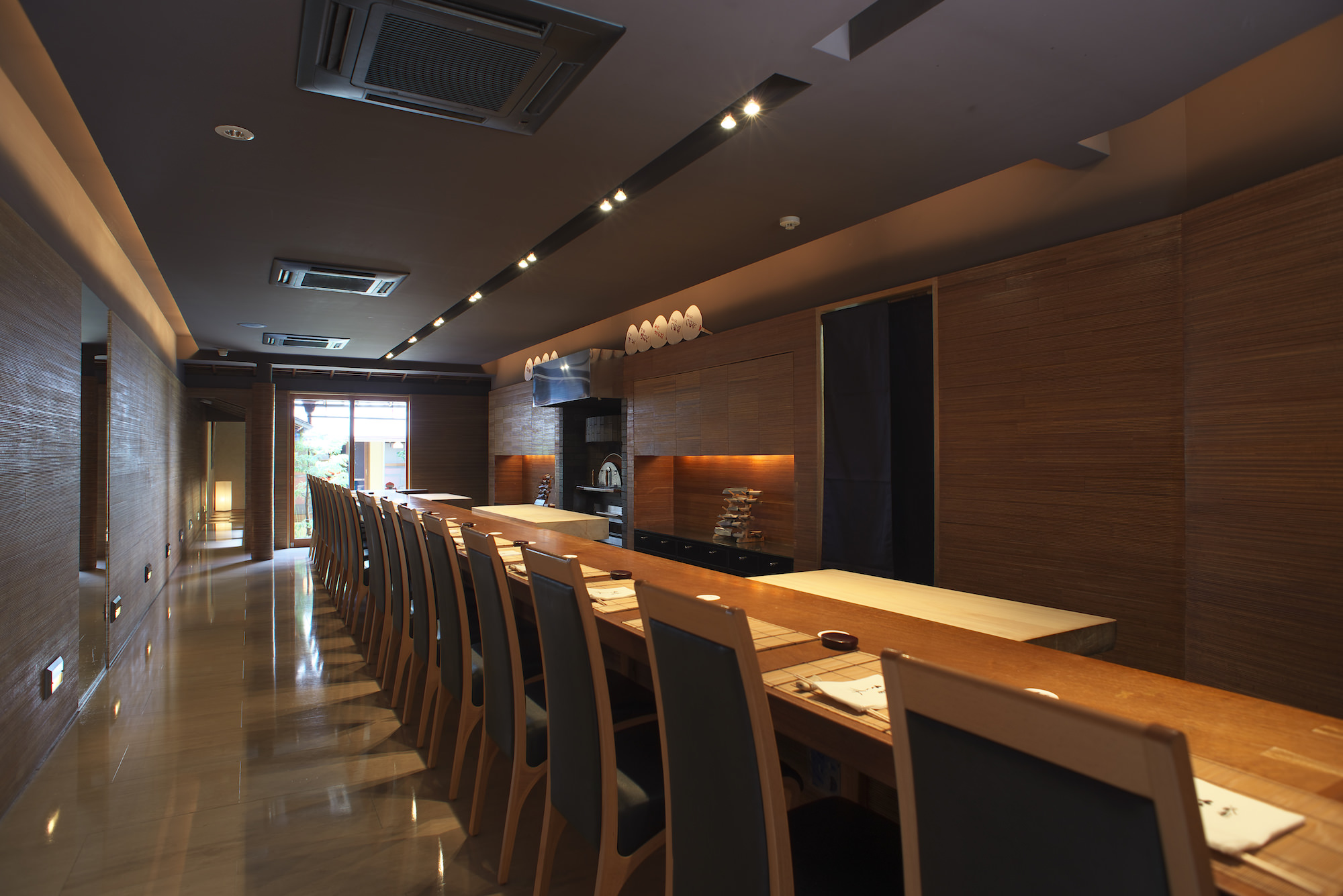 It’s also owed to your skills as a chef and your personal magnetism. What was the inspiration behind the food at Sasaki?

Sasaki:
To be point blank, it came from going into debt! Let me put it this way: we had to get customers to come in order to repay our loans. And we had to absolutely satisfy those customers to turn them into patrons and cement our reputation. It wasn’t enough to leave them satisfied; it had to be the kind of no-compromises conviction that this was the place to go for a good meal.

It was grueling for us, naturally. When you have backing from a loan, you can do anything. If it had made the customers happy, I’d even have put fried cartilage on the menu — it’s one of my favorites, in fact (laughs).

I like the outer skin of the blowfish. I was talking to a customer about the idea of grilling it, which might produce a texture kind of like grilled intestine. The customer found the idea intriguing, so we tried it. These conversations led to a lot of discoveries. It’s like getting back to the roots of cuisine. There were dishes born out of this process of engaging customers, and some of them became hits.

What else do you try to emphasize, besides the cuisine?

Sasaki:
Having fun. You can’t have fun by half measures. When you have fun, you have to go all out, splash out your cash.

For example, I recently invited 470 guests to the Hotel New Otani, including Momoko of High Heel and Hirofumi Hanba, with a live show and performance — including me singing songs by Eikichi Yazawa. You know, I’m a huge fan of Yazawa’s work. I hope he’ll come to the shop some day.

In any event, we really went all out on the costumes and everything for the event. We like to play hard. We even made this album. It cost 10M JPY, and my wife sure got pissed at me (laughs).

I really feel that when you have fun, you have to go all out.

This really gives new meaning to the idea of the “Sasaki Theater!” All the same, these events let you make new inroads with your customers, you might say. 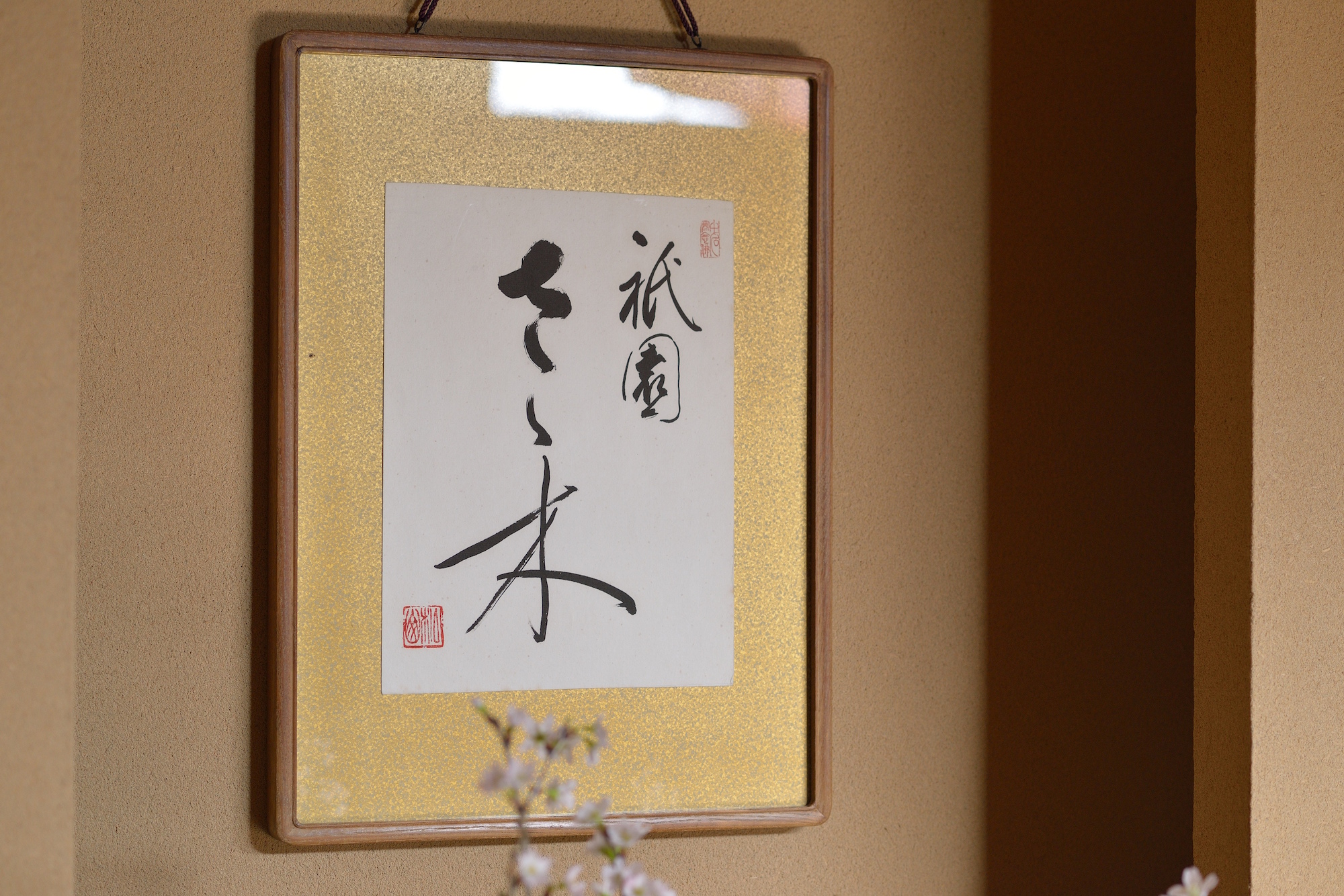 What is your take on the state of Kyoto cuisine today?

Sasaki:
One thing that sticks in my mind a bit is this: in Kyoto, Osaka, and elsewhere, you have shops that barely fit ten people always talking about how they’re at full occupancy. These shops are on the rise. But when you ask them why they don’t grow their operation, they say something like they don’t have the budget to get any more plates, or something like that. I would understand that if they’re talking about the works of potter Rosanjin, but stoneware is bound to break as it’s handled. If they’re making good money, shouldn’t they buy stoneware? They can’t be treating these things like art objets.

In other words, it’s not enough to get contented with filling up a 10-man shop. You have to grow. In the old days, we used to talk about “grabbing the crown.” You have to want to go big and climb to the top of the heap. If you don’t grow big enough to sustain an operation to train young chefs, you can’t pass on the traditions. With respect to the food itself, what good is it to just put out run-of-the-mill Kyoto cuisine? You have to think outside the box. Once you’ve gone crazy with ideas and you hit age fifty or so, then you can shrink down your shop and go back to serving the old, classic stuff.

I’m sure that these chefs have their own philosophies about things. That, maybe, is fine in and of itself. However, when you have a young generation in your ranks, you have to pass on your skills to them. That’s the notion of tradition and of an unbroken chain of knowledge — this is essential to the Kyoto chef. If we don’t uphold that, how can we keep Kyoto’s traditions alive?

Some chefs feel that Kyoto cuisine must not change. What is your take on this?

Sasaki:
I tend to say that we must reference the old while incorporating the new. The times change.

It used to be unthinkable to change the fundamentals of the kabura-mushi dish (steamed fish with turnips and egg whites in broth). Naturally, initiating change is not easy. That’s fine. But what about minced duck dumplings? What about viscous broths? What can we do with those? What happens when liquor enters the mix? For food served at traditional inns, they’ll serve fifty people’s worth, but twenty don’t touch their food.

I think we should move away from that and create quality food that people want to eat but that is still to the Kyoto standard. We should have chefs who want to move the boundaries for Kyoto cuisine five inches forward in their generation. That’s what I’d like to see from young chefs.

Even Kyoto cuisine needs to keep with the times.

Sasaki:
I was recently talking with Mr. Murata of Kikunoi, and he said that the 1980s were the days when Chihana ruled the roost, and the 1990s were his days, but since entering 2000, it’s been my era. While the others had ten-year runs, mine is still ongoing. He told me my streak has lasted too long! To turn this around, we might say that no promising young chefs have emerged after me and generated buzz.

That’s why I keep telling everyone the same thing: You have to go wild, non-stop, make crazy cuisine, and go big.

When you talk about “going wild,” are you referring to taking on new challenges and being adventurous? Do you look for that sort of attitude in your apprentices?

And yes, I look for that in spades from the young staff. So if they create interesting side dishes that we use for our own staff meals, I’ll sometimes pick those up and carry them over into the evening menu. The head chef in charge of the cooking at my shop has made it to the best eight at RED U-35 (a contest open to chefs up to age 35), and he is very creative, so I have high expectations for his growth.

We need people like that to gather the young generation together and train them. If we don’t, Kyoto cuisine as we know it will wither away.