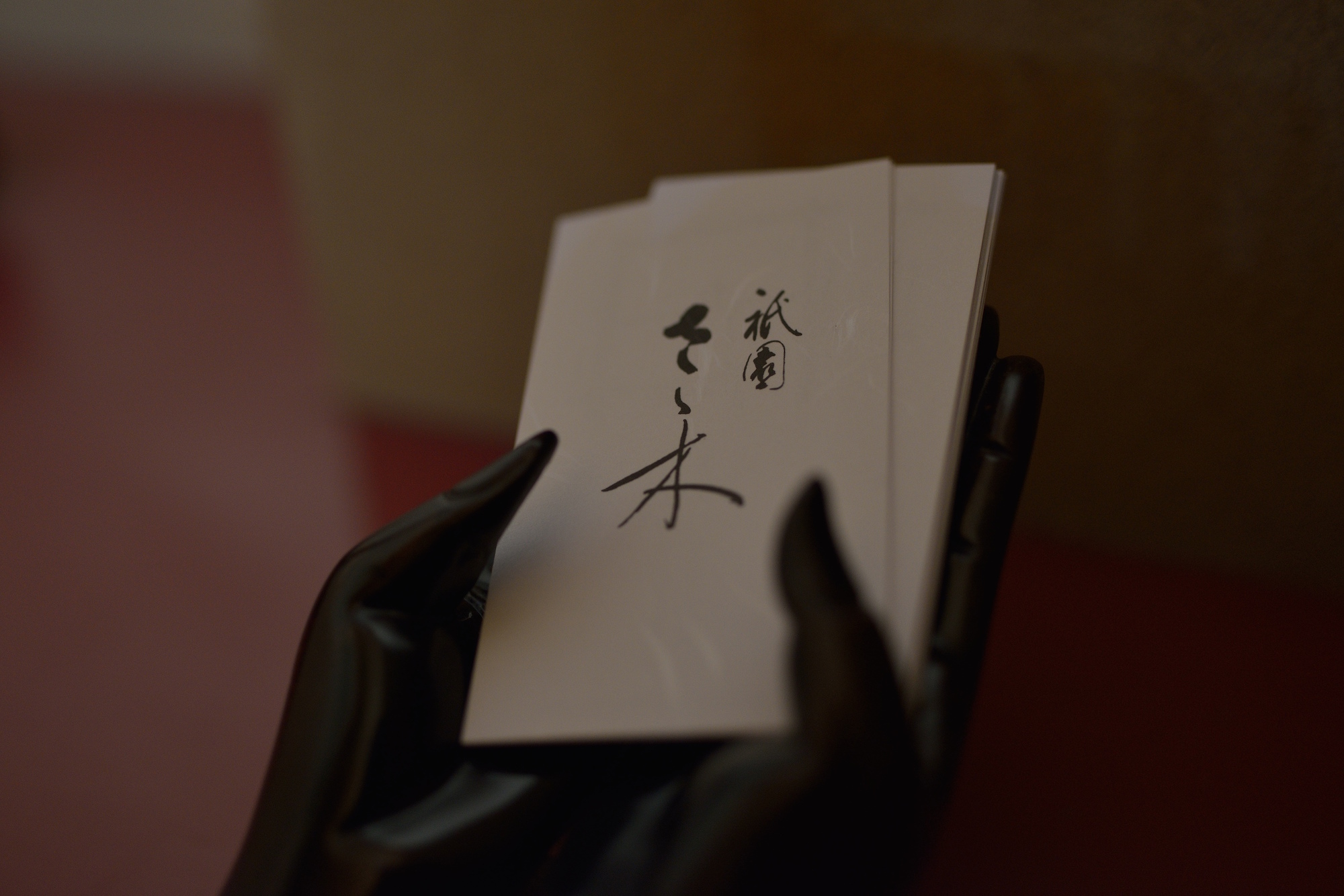 This was your big break as a head chef.

Sasaki:
So I went to work at Sakura, a restaurant in Kawanishi-Ikeda. I commuted from Shiga, which took two and a half hours each way.

I was glad to have received the offer, but the commute was killing me. I told a younger colleague about the place and he said he would love to work there. So he took the reins from me after a year.

I was then approached to work at Fujita, a shop in Pontocho, which was newly opening. I spent eight and a half years there.

This was right around Japan’s economic boom times, right?

Sasaki:
That’s right. I was in a car with the shop owner en route to play golf when the radio broadcast the news about Black Monday. It was October 19, 1987. Things had been booming until then. When he heard the news come on, the boss was at a loss for words.

Once this rippled over to Japan and the economy tanked, we were in dire straits. The owner asked me if I would like to become both the president and head chef of the shop. I turned to a customer I was on good terms with, and he researched the financials of the shop. He said that if it went on auction and I lost the reins, I and the other young chefs would be stranded.” So I steered clear of the offer.

Instead, this turned into a new impetus for going solo. I decided I would open my own shop, and let someone else become the head chef at Fujita. The next issue was that no matter how hard I looked, I couldn’t find the right property to use.

I wasn’t making the right connection with one that clicked. Real estate — it’s just like dating, you know. But one day, an introduction of a nice real estate suddenly came, so I talked my old master from Rinkoan about it, and he said I could go. This got things moving with some real traction.

Once we picked a location, we went to the bank — penniless, of course. The economy was tanking, so everyone was in trouble. No one wanted to lend us money. The twelfth bank we went to had no intention of lending us money and acted in a high-handed manner. I got fed up and went home.

We were just getting ready to ink the contracts, but things weren’t coming together. I borrowed 2M JPY from my brother, when I just happened to recall that one of my longtime patrons at the shop was the director of the Shiga Bank. I figured I had nothing to lose, so I called him up, and he agreed to meet. It was a huge change of pace from the other banks we’d gone to. We told him our plan, and he said he’d wire the money on the spot. He OK’ed 5M JPY then and there. As director, he had authority to sanction projects like this. I brought the documents to the bank the next day and saw him giving instructions to his secretary. I thought, “Man, this guy is one cool cat.” This was three days before we had to finalize the contracts. I’m grateful to him to this day.

This meant you still had a fighting chance, which you’d barely had three days prior. Given your success, we could say that the bank director had a discerning eye. He invested in what he saw as your culinary skills.

Sasaki:
It was a dramatic moment. We finally got the contracts together, and my wife pledged her own 2M JPY, so we had 9M JPY in total, which allowed us to open the shop. It was 1996, and I was thirty-four.

So the economic downturn was your chance to strike out on your own. What was the first shop like?

For our grand opening, we had a surge of customers, but after three months, it was like the wind had blown out of our sails. We were turning up empty day after day. It was a real “uh-oh” moment. 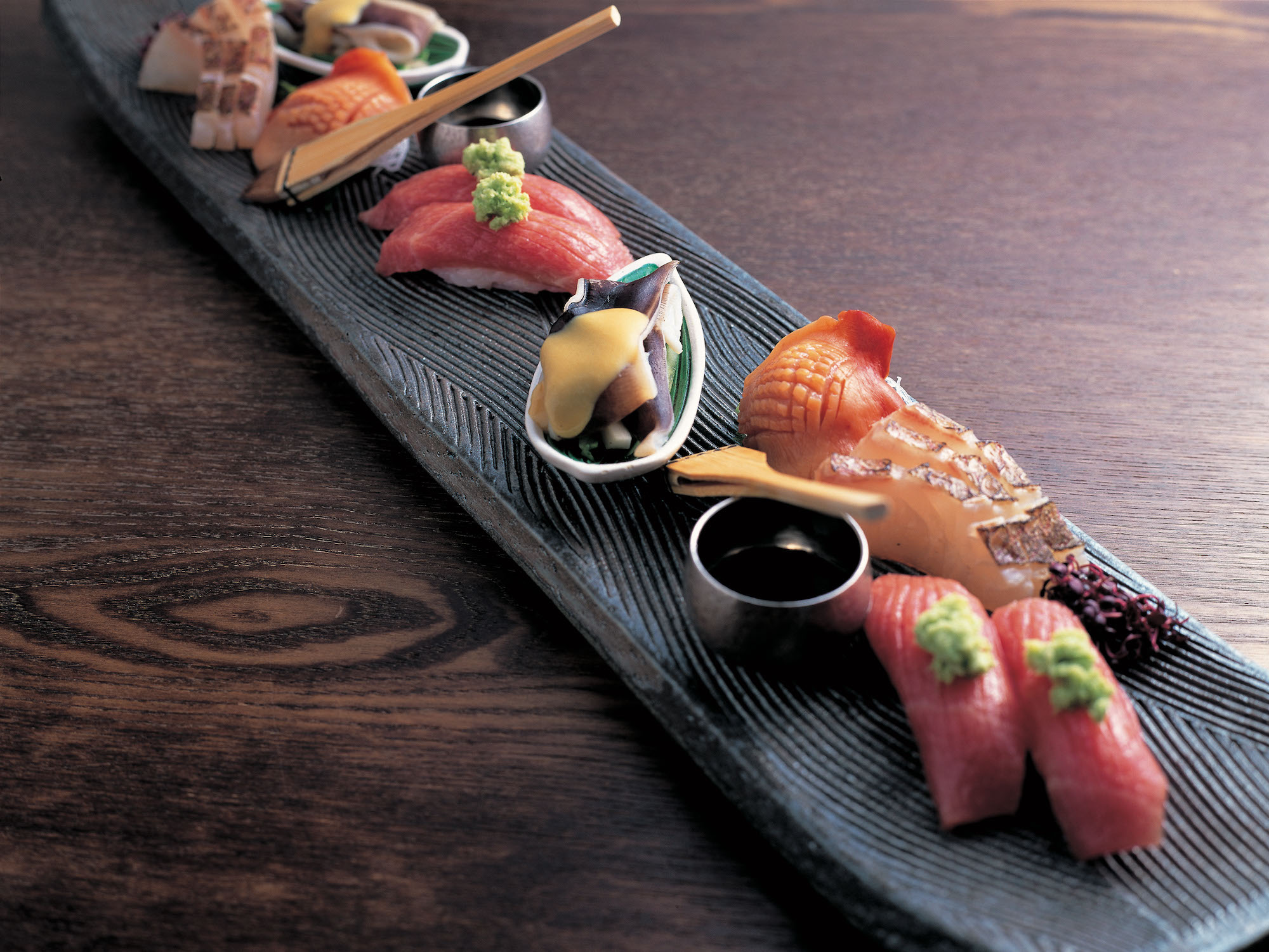 So even you went through those dire times. What changed things in the right direction?

Sasaki:
It was something subtle, actually. We weren’t getting anyone for two days straight, but then we had a call for an evening booking. I had an idea on the spot, and told the person manning the phones to turn them away and say we were at full occupancy. From that point on, if we didn’t get any bookings by 1PM, we’d turn down all other calls.

The reason being was that, if we set the cutoff at 1PM, we could somehow call on friends and good patrons and scramble together to get them to fill seats by evening. So people would show up and indeed find that we had a full counter. This suggested an air of thriving activity. If we set the cutoff much later, we wouldn’t be able to get our “reserve crew” in time. It was essential that we have these other patrons sitting at the counter to lend a lively mood. Otherwise, the ones who’d made real bookings would be bored out of their minds. They would find the food boring and bland, too, if that happened. A good mood was essential.

After doing this for a while, we developed a reputation as a hot joint that you couldn’t get a seat at. My intent with this was to create a good mood for the customers who went out of their way to book with us. I just wanted to create a lively atmosphere with full seating. But it went beyond my expectations and transformed our whole reputation (laughs). The shop started to get on track, and I returned the money I’d borrowed within three and a half years.

One day, Genjiro Saito, a famous French chef from Tokyo, popped into the shop. He frequented a massage parlor nextdoor. We just happened to be at full occupancy when he came, and this happened twice in a row. The next time, he called in his booking by phone. Through him, we were scooped in Katei Gaho, the magazine.

This is a magazine with a national readership, and I wanted us to look sharp when they photographed us. I made paper lanterns and wrote the menu with a calligraphy brush. The editor came back and said that wasn’t in keeping with my style. It kind of ticked me off, but I came back with a large plate stacked high with food, and they loved it. It came out perfectly. I realized that editors know their stuff. He was right all along! (laughs)

That triggered a flurry of reporters, and then customers. We would have sometimes seven people in the four tatami mat room and eleven in the six-mat room. Patrons would have to line up by the stairs to wait to use the lavatory. People couldn’t wait and said they’d go relieve themselves outside!

So I’m guessing that you changed locations because the shop became too cramped?

Sasaki:
No, not at all. I wasn’t harboring any pretensions about it. I was happy with that shop as it was.

But — we always had full seats, and there wasn’t proper room for things like mirrors for the girls in the hall staff to arrange their outfits. We would store cold beers on the roof overnight to make room, and we were running out of space for plates. The roof was also a bit leaky, I might add. They were doing constructions on a building four doors down, so we asked if they’d let us use it as a storehouse. Turns out the owner also lived there — it was his home.

I called him up and he said that, while the rent would be high, he would cover renovation costs, so we could refurbish it however we saw fit. We wound up moving the whole shop over there.

We had ten counter seats and a 4.5 mat room upstairs, as well as two rooms seating 12 people each. It really expanded our space.

Did you add more cooks onto the roster, too?

Sasaki:
Yes, we did. We suddenly grew our ranks to six people.

Hearing that we’d grown, Yosuke Ogawa of Kitcho (now head chef of Ogawa) came knocking. “I’ve quit my old shop! Let me work here,” he said. Next came Masayoshi Nishikawa from Gion (now head chef of Gion Nishikawa). I wondered how I was going to afford the salaries for these guys. We decided to start offering lunch, which we hadn’t been doing up to that point.

Katei Gaho came back to us looking for the latest scoop on any interesting shops. We told them to scoop us again! We’d started lunch service, after all. And they did.

Next came Mr. Kadokami, the food critic for dancyu, and cameraman Harry Nakanishi in tow, and we became great friends. They leaned on various publications to feature us.

Just serving lunch wasn’t super exciting, so we wanted something fresh and new. We started offering a cake buffet. Kaiseki cuisine is generally served with jellied desserts and fruit, but we changed that. And it was a huge hit. This synergy between the lunch and evening courses led to, again, full occupancy, and we now had enough profits to pay those two star chefs.

A cake buffet at a traditional Kyoto eatery! That is quite an idea. Who made the cakes?

Sasaki:
We made them ourselves, through trial and error. We would put six cakes on a large tray and offer people to select the ones they wanted — or they could eat them all.

So the lunches might not have been a success without Messrs. Ogawa and Nakanishi.

Sasaki:
That’s right — after all, Gion is not a place that people generally stroll around in the afternoon. The fact is, that area is filthy in the afternoons. It’s when all the parties let out and they’re cleaning up, if you know what I mean. If you were to clean from Hanamikoji up to our shop in the afternoon, you would fill two cabbage crates full with trash.

So the day always begins with cleanup. That’s the basis of everything. We start with cleaning, build ourselves up again, and get ready for the next evening. That’s how we’ve gotten to where we are today.