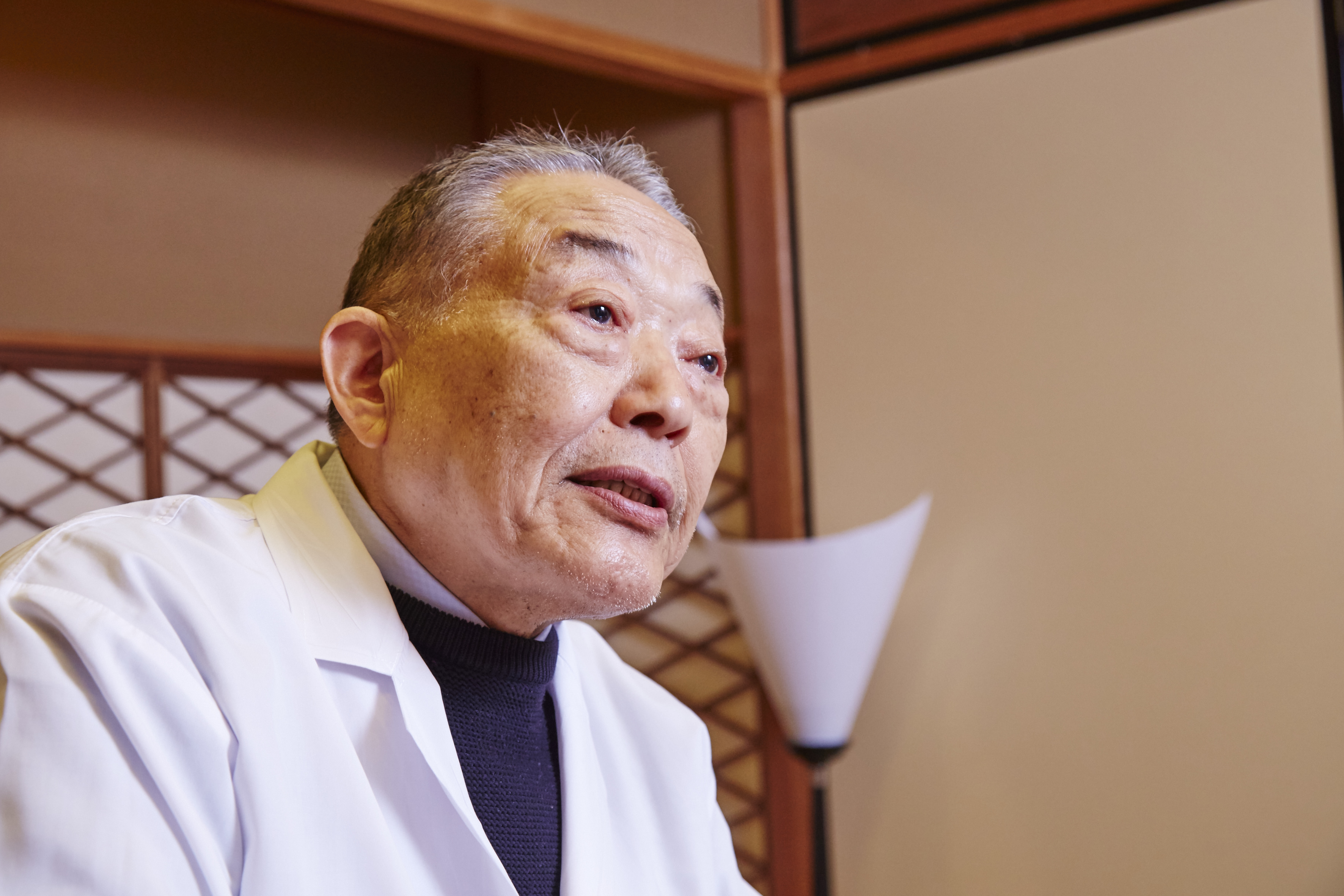 What kind of restaurant comes to mind when you hear the words "Japanese restaurant"? A narrow interior with a counter and limited seating; a master and a number of disciples displaying their skills.... Well, Kagaman in Kitashinchi is a restaurant that breaks from this mold. While Kagaman is a large-scale development comprising a group of restaurants housed between the basement and sixth floor of a single building, each restaurant shines with its own distinct touch. Hiro Saka is president of the the Michelin star favorite Kagaman Group, which includes the Kagaman main branch, Fukunoya, Kadonoya, Manu, Manu annex, Tominoya, Sakau and Miyagen. I wonder what he will speak to us about today! 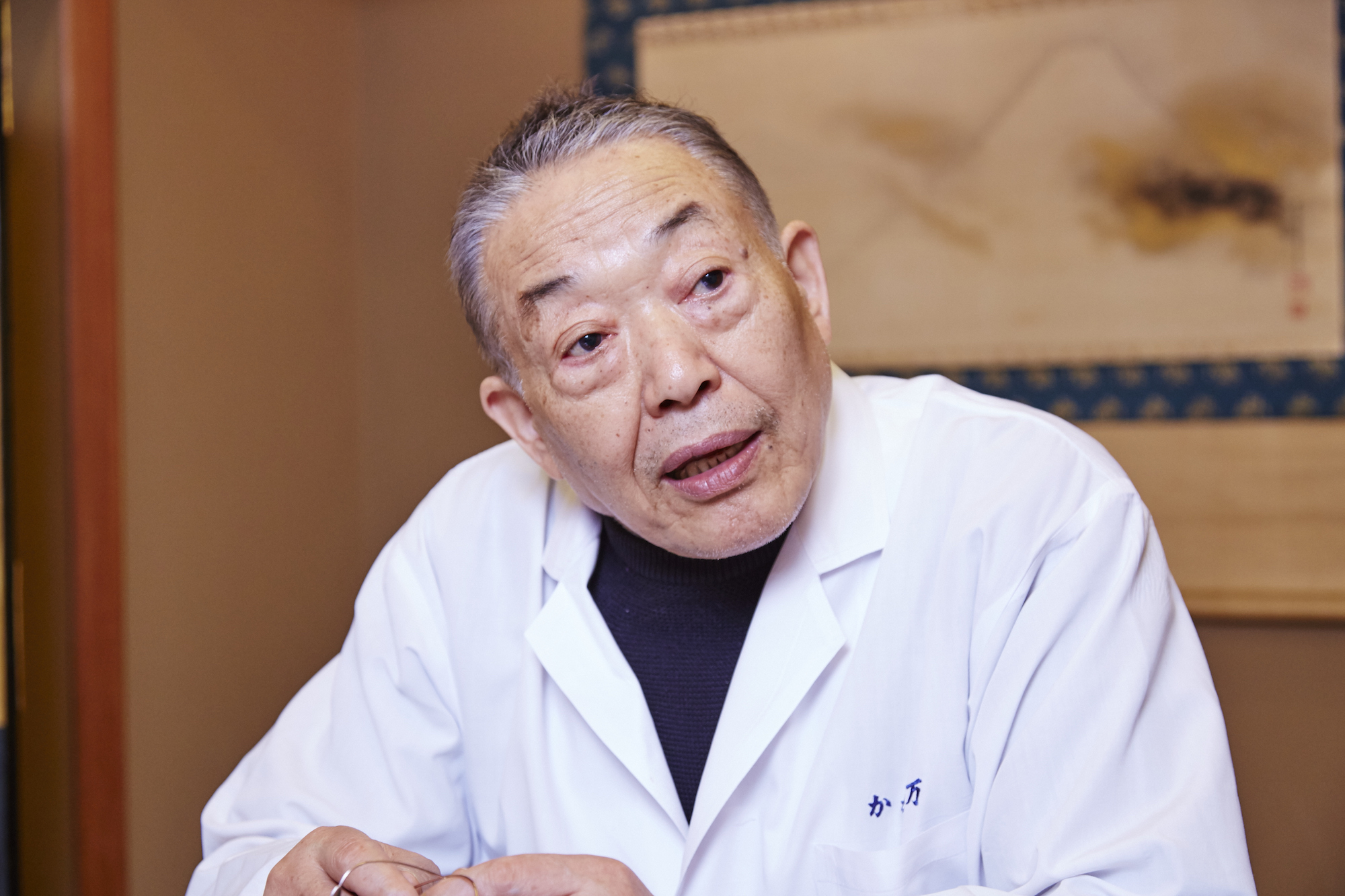 It All Started with a Single Book. Training at a Famous Establishment that Sealed His Fate.

When did you start cooking professionally?

Saka:
I was sixteen. I left my home on the Noto Peninsula in Ishikawa Prefecture and found a job with Sanko, an Osakan steamship shipping company, where I worked on a ship making international trips. I hated studying and was promised good wages on board. After serving food for the first year, I worked the following four years as a cook. The ship was large. It carried customers and a crew of forty eight, and at times we carried a four-month supply of provisions. Our destinations included Asian countries like Hong Kong and Singapore, and sometimes we even went as far as Africa’s Cape of Good Hope. The ship would sway when cooking, and the higher-ups would give us hell if we weren’t careful when serving. After all, we were the lowest of the command chain. Cooking wasn’t simply limited to Japanese cuisine: We also cooked Western and Chinese; and we made sweets and baked bread. I liked eating, so I would buy bananas, a luxury at the time, in Africa or make chicken ramen at night.
What sparked my interest in Japanese cuisine was a cookbook by Tokuzo Akiyama, which I happened to read on board the ship. I was twenty at the time. I was impressed and wanted to give a real go at my studies, which is how I embarked on the path of Japanese cuisine.

How did you find your training at a Japanese Restaurant?

Saka:
I started out at a famous establishment. They weren’t in the middle of hiring, but I was lucky to get hired thanks to a word from one of my relatives. Being a chef’s disciple is like being a cook on a ship; and since being a cook was more stressful, my training went by like a breeze. After all, your feet don’t wobble like they do on a swaying ship [laughs]!
I trained for fifteen years before opening my first restaurant. Back then, many of us would go from restaurant to restaurant through arrangements set up by our employers. I was no exception and did a stream of jobs. Thinking back, I’m glad that I got to experience a range of restaurants, and now I feel that desire of chefs to make delicious food is the same now as formerly.

How did you come to set up your own business?

Saka:
I wanted to set up my own business around the age of twenty three or twenty four. I had only really eaten dishes prepared by my mother, and I had strong ties to my family. So I wanted to set up a restaurant that served rural family fare with my own straight flavor.
At thirty five, I bought a restaurant space below Kitashinchi that was selling for 20,000,000 yen (Note: Around 48,000,000 yen according to the going rate in 2016) and started a tofu hot pot restaurant. I wasn’t used to a counter at the places I had trained at, so when I first saw my very own cypress counter and how beautiful it looked, I thought to myself, “Game on!” [laughs].
The name of my restaurant has its roots in the “Kaga hyakumangoku” of Ishikawa, my home, and Nadaman, a restaurant that took me into their care.
I borrowed money at the outset. Obviously, this involved risk, but I wasn’t daunted. It’s not that I was over confident, though. Rather, I thought that if things went south, I would just quit. So I tried to see just how much money I could borrow. I had nothing to lose, so I wouldn’t have been able to do anything if I were scared. It was a case of sink or swim. 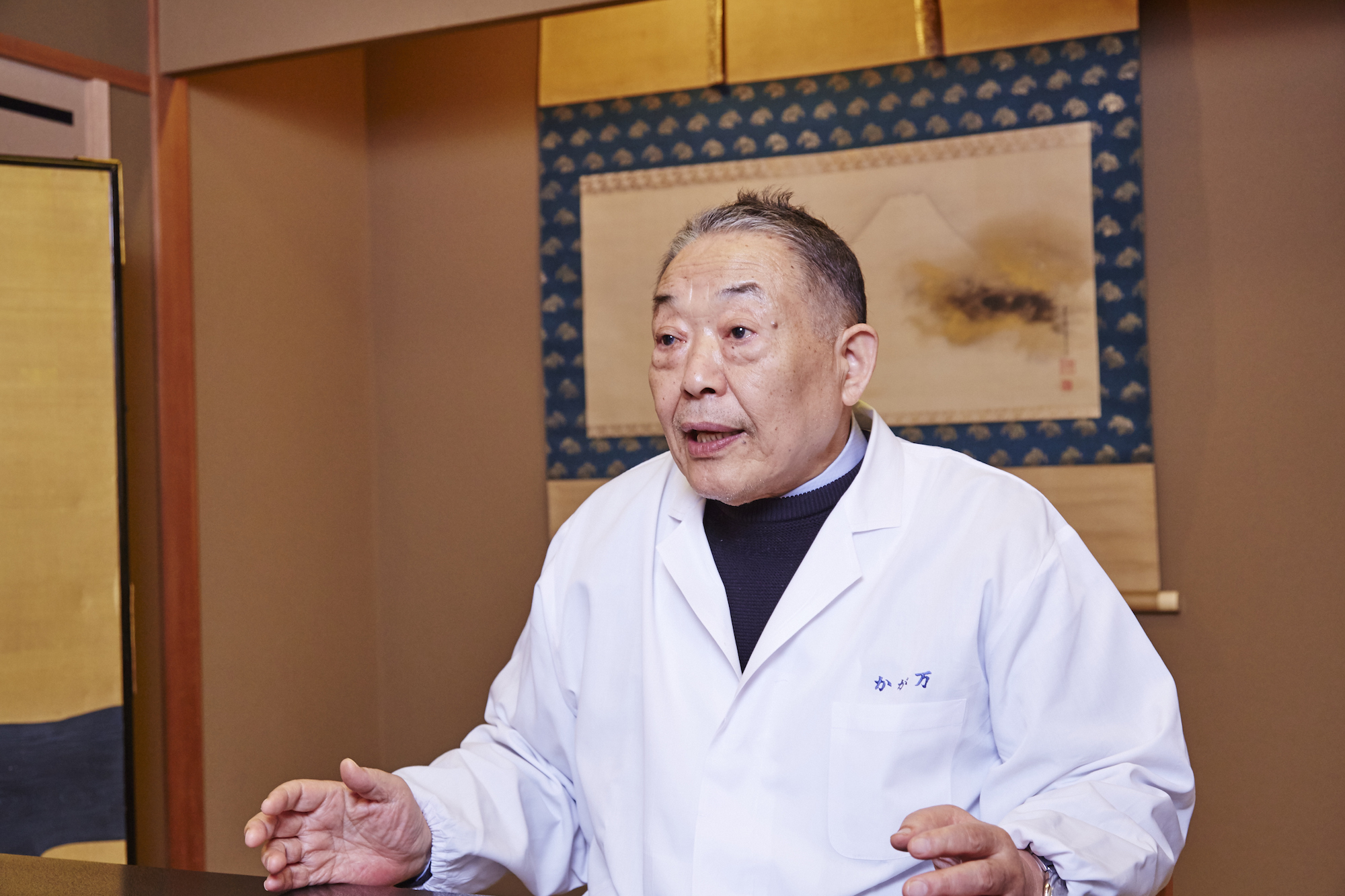 Having Faith in People and Fostering the Next Generation. “People” Are What’s Important.

Kagaman boasts a large restaurant space. Wouldn’t you agree that such a large-scale restaurant is quite rare?

Saka:
We have a counter and private rooms, so we can meet the requests of our customers on a number of levels. But whatever the configuration, each space has its own chef. We don’t have one chef tending to a large group of customers. I trust that this configuration will deliver something our customers will enjoy. It is our promise to them.
I didn’t choose this configuration for our own convenience. It came about through responding to the needs and wants of our customers. It’s important to respond to your customers. For example, if a customer says, “I want to eat a fried egg,” you should respond to this request without questioning its place in Japanese cuisine. Nothing is embarrassing. I think that being able to respond to the customer is sign of kindness.
There are also many chefs who have been with me for decades. Under Kagaman, I can produce their places of work, as I have a number of restaurants.

Kagaman employs a number of chefs. Was this intentional?

I cannot cook food alone. I need a team, so I employ a large number of chefs. There are a number of people who run restaurants on their own, but I don’t think that’s very wise.
A team inspires each other, and nothing gets missed because everyone works together. Perhaps people who go at things alone cannot build a team, or trust others, rather.
It’s difficult to foster successors, but if you don’t, you can’t move forward. Of course, I understand that one should front their own restaurant.
But you don’t have to front it, which is why I believe that one should foster understudies.

You are passionate about fostering successors. What is the key to fostering them?

Saka:
Heart, of course. You can’t call it cooking if it doesn’t have soul. There is no need to painstakingly analyze cooking skill. Cooking skill is, in the end, a personal matter. Talent is undeniably important, but what’s more important is the personality of an individual. It’s not about performing tricks. It’s about people.
After all, without people, what good is a restaurant?

Saka:
Yes. Think about the architecture of my restaurant. It was built in the sukiya-zukuri style I had always dreamed of thanks to a master carpenter I am acquainted with. I am careful with interiors and I consulted with an architect. If I didn’t like the interior, I wouldn’t enjoy working there. It’s the same with the serving vessels. Architecture, cooking, and service make a great team.
And when expanding my restaurant, there was this customer who was big in the banking industry: he was kind enough to open his doors whenever I needed. This man really helped me out. And during the Hinamatsuri, I even received a doll from a customer… I’m very blessed.

So I think luck is also important. I’m a very lucky person. Even when it comes to my staff, I think that whatever comes our way, we’ll all be happy if they stick by my side [laughs]. 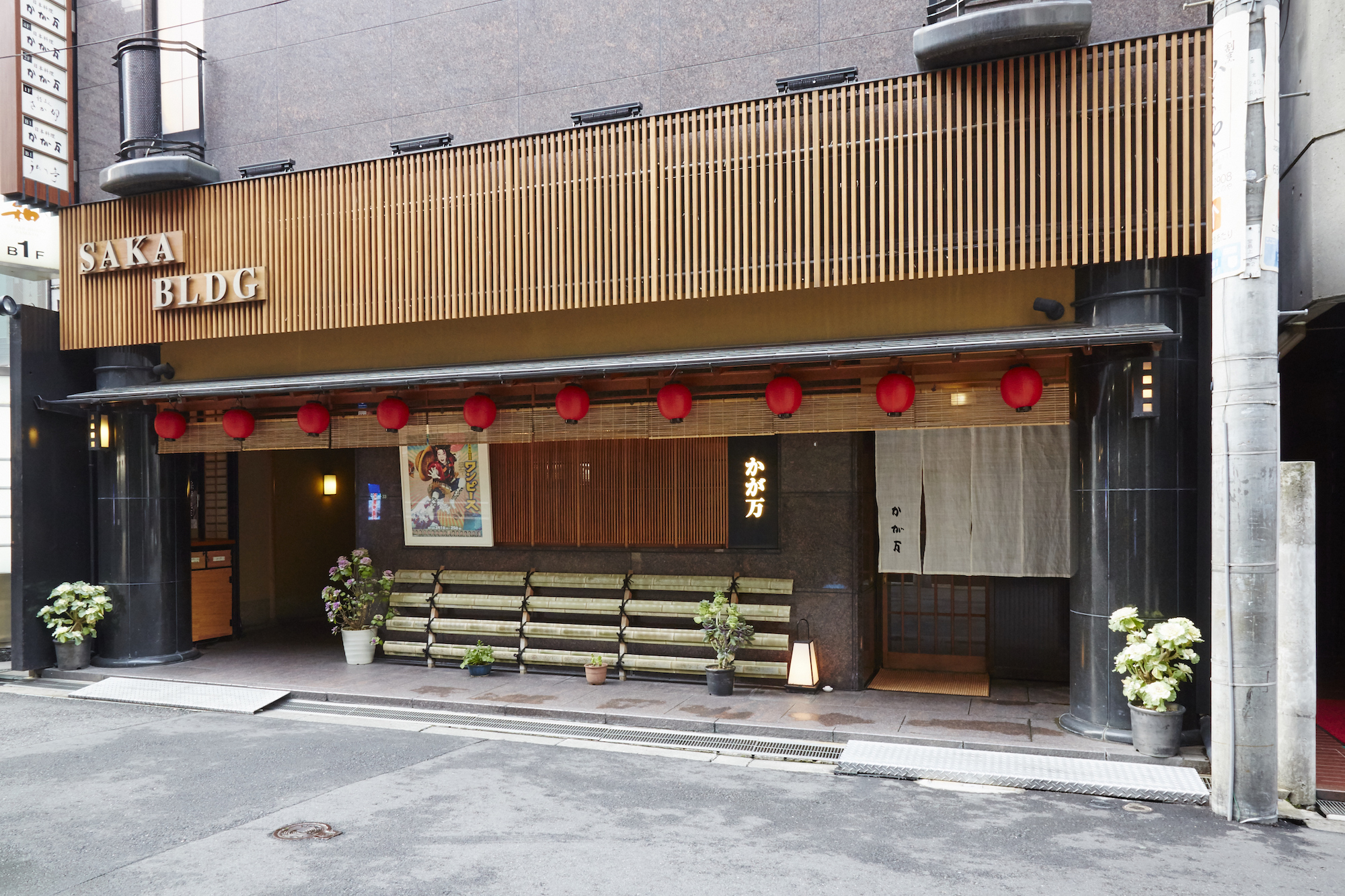