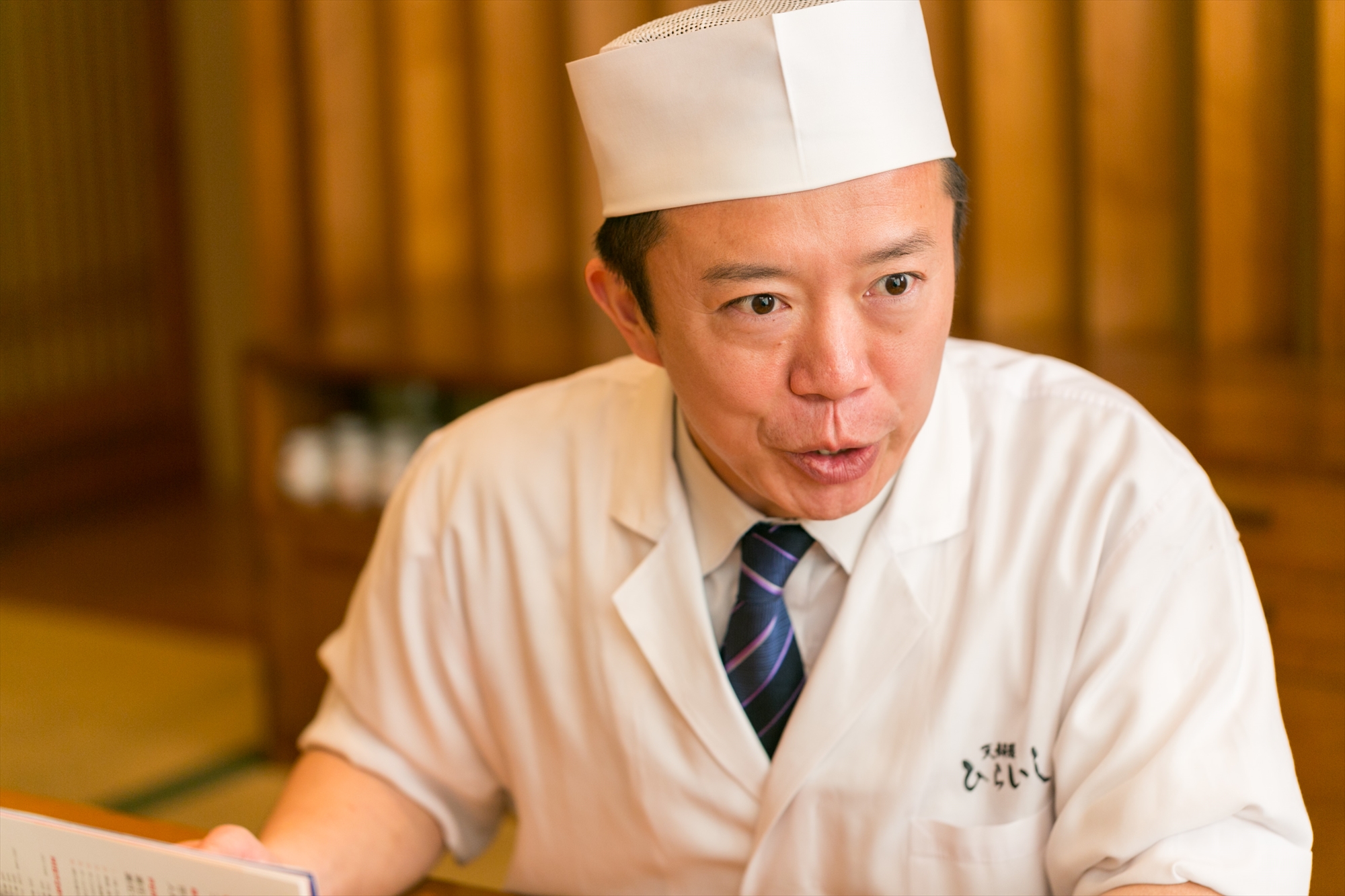 Classic is what lasts. Not an artist, I want to be a craftsman advancing the technique

Hiraishi:
In terms of cuisine, Kagaman chefs were traditionalists and they were the type who thought things “did not need to be decorative, simplicity was best” so in contrast, I tried to bring a fancy variety.
I went to restaurants all across the spectrum during my explorations…
Recently, a type of foamy cuisine called espuma has become popular and at a Spanish restaurant in my hometown called El Bulli, I learned that the purpose was not to simply put add espuma atop the foods, but to reduce the acidity of the food. However, in Japan, only the superficial aspect had been transmitted because it is trendy.
Looking back, when I thought, “what style of food can I create that I will not bore of before I retire?” the answer turned out to be classic.
So, I want to create simplistically presented, tempura without a lot of materials or packaging.
Instead of those things, I will dabble in the popular rice powder from 10 years back or different combinations of oils and move forward by trial and error from that perspective.

When it comes to trial and error, aren’t there some trendy adaptations for tempura?

Hirasishi:
Of course, there are. Restaurants fail because of a dependence on trends. And so a restaurant that does not rely on trends is one where rather than having an artist who relies on wacky cuisine, there is a virtuoso, a craftsman. Even Paul Bocuse who received three stars from Michelin for French food is a master chef. It is not cuisine that only he can create but it resonates precisely. If I can do this, then I could have a breakthrough and it is the reason I thought I too would like to be a classic master chef. When it comes to tempura, original styles are not possible if you are aiming for your own style or some eccentric creations. If you only specialize in vegetables, you may lose the ability to fry congor eel and in the end other issues will come up.

So you mean that you returned to the training you received at Kagaman?

Hirasishi:
It is not limited to Kagaman but the master chefs in the business for decades do not often change their methods. This is especially so with tempura.
When I create decorative tempura and “I do not want to do what others do,” I had the chance to introduce what my work to a famous restaurant in Tokyo and I was asked, “Hiraishi, have you been able to develop something that people will say has lasting value?” I answered that “It does not taste bad but it’s missing that special appeal.” I felt the greatest impact when I was told that “from long ago, shrimp, Japanese whiting and conger eel have been found to fit well with tempura. You had better think of a way to fry them well.”
There is a expert culinary arts shop in Kyoto where fruit is creatively used in pickled dishes but even there, I was advised that “none of the chefs can exceed the quality of the ingredients. Elaborate techniques will not mean anything if the food is not good.” 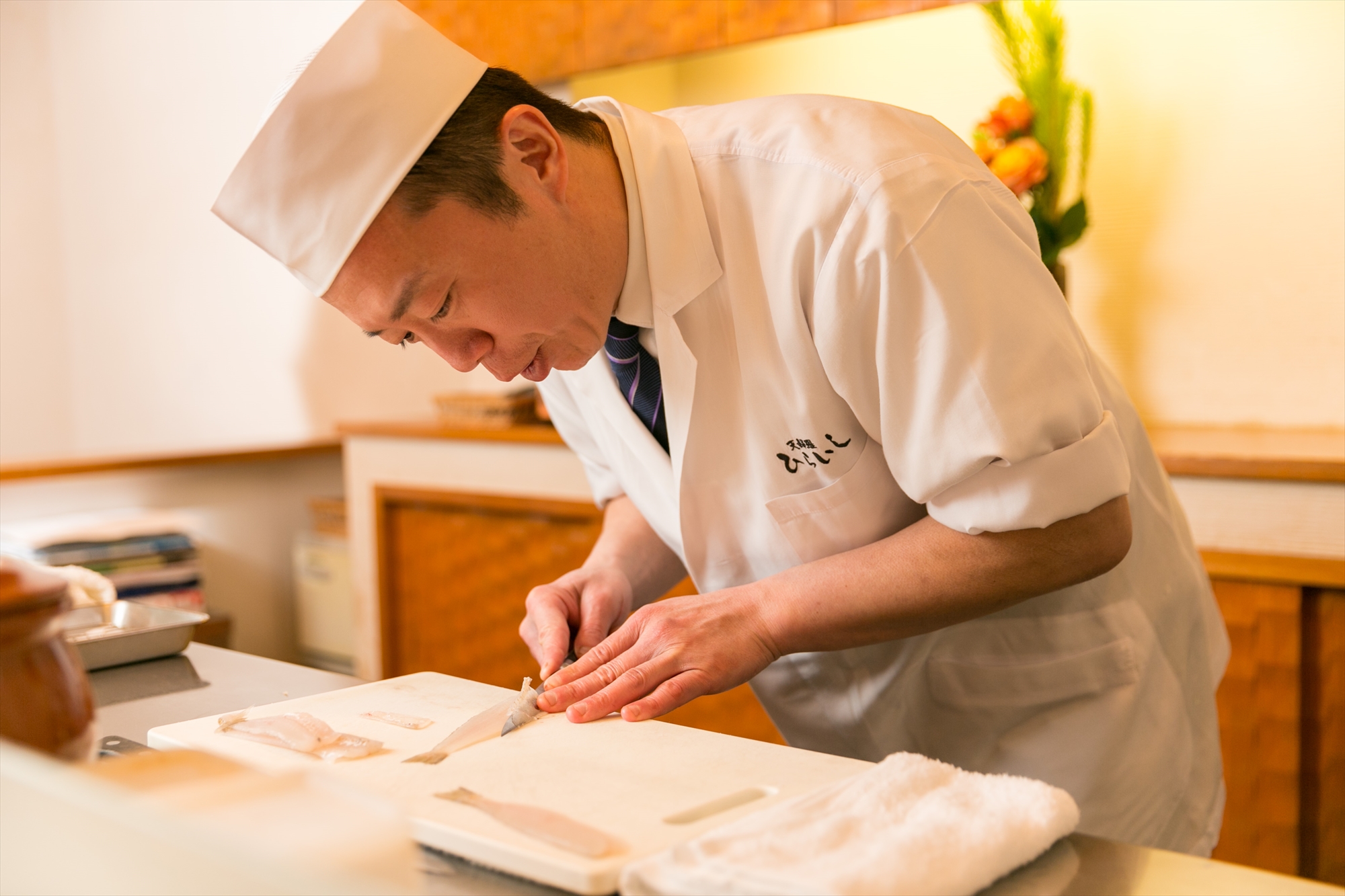 Cherishing the relationship with the customers

I have heard that you have a shark fin tempura specialty. Also, how did the combination of wine and tempura come about?

Hiraishi:
Of the wide variety of creations I have attempted, I felt that the shark fin tempura is the only one that will have lasting value. There is practically only one and it’s my original. The inspiration came from a customer who runs a company and who patronized my shop several times a week…The customer said, ”since you have just opened up, you must be extremely busy but you have to create customers who can not eat anywhere else but at your restaurant. This is a business so you have to make profitable, luxury food that will be so impacting that people will want to go out of their way to come and eat.” That reminded me of a story I had heard about a hotel that made tempura from shark’s fin. So, I thought, I’ll try it!
That was how I came around to trying it but it was not so easy to make shark fin into tempura. It does not fry well. As I struggled, that customer told me “I’ll put up the costs for the prototype!” (It surprised everyone!)
With that, I could not lose my nerve later on and I seriously took up the study of tempura. I will not talk about my trade secrets but the result of various tests is that I found the secret to fry shark fin well.
That is the story of how Hiraishi’s shark fin tempura was born.

I was not interested in wine at all but 1 or 2 years after managing the tempura shop, I went to a famous tempura shop in Akasaka that a friend introduced me to and there was a big wine cellar there. I saw an elderly couple selecting some wine. I thought, “they look so cool.”
Then, from thinking that with wine and with cooking, people want to have the real thing so that German and French produced wines are more common. But recently, Japanese sake has seen a resurgence so, I thought about incorporating it in the future.

Tempura is classic cuisine but there is something about it that adapts to each generation. Isn’t your strength, Mr. Hiraishi, in the inspiration for branching out or in creating a new spring menu item that brings in new customers?

Hiraishi:
My customers are blessings. Even new customers say “I wanted to have something delicious” when they come here. Young people come here faithfully once a year on their wedding anniversary, others bring their parents and it really makes me happy. It is not just because the restaurant is listed in Michelin but I get people who say, “I want to eat some of his tempura.”

Well, I’ve heard that earning Michelin stars for seven years in a row is very difficult. Were you extremely happy about that?

Hiraishi:
I had wanted to open a French restaurant but then I heard that Michelin would also be coming to Japan and it peaked my interest. When the Kansai version came out, I had only been in business on my own for about a year and I did not even have a profile which made me an outsider. Then, three months later, I received a phone call with the message “I am not sure if your restaurant will be listed but it has been nominated.”
Since I was aware of the reality that school research trips and honeymooners would travel any place in this country where restaurants have earned stars, at first I was like, “Oh, what am I going to do?” and I felt a lot of pressure to get the star for my restaurant.
After the publication, I got a surprise visit from the Michelin headquarters president who came to eat at my restaurant even though it was not a part of any investigations. 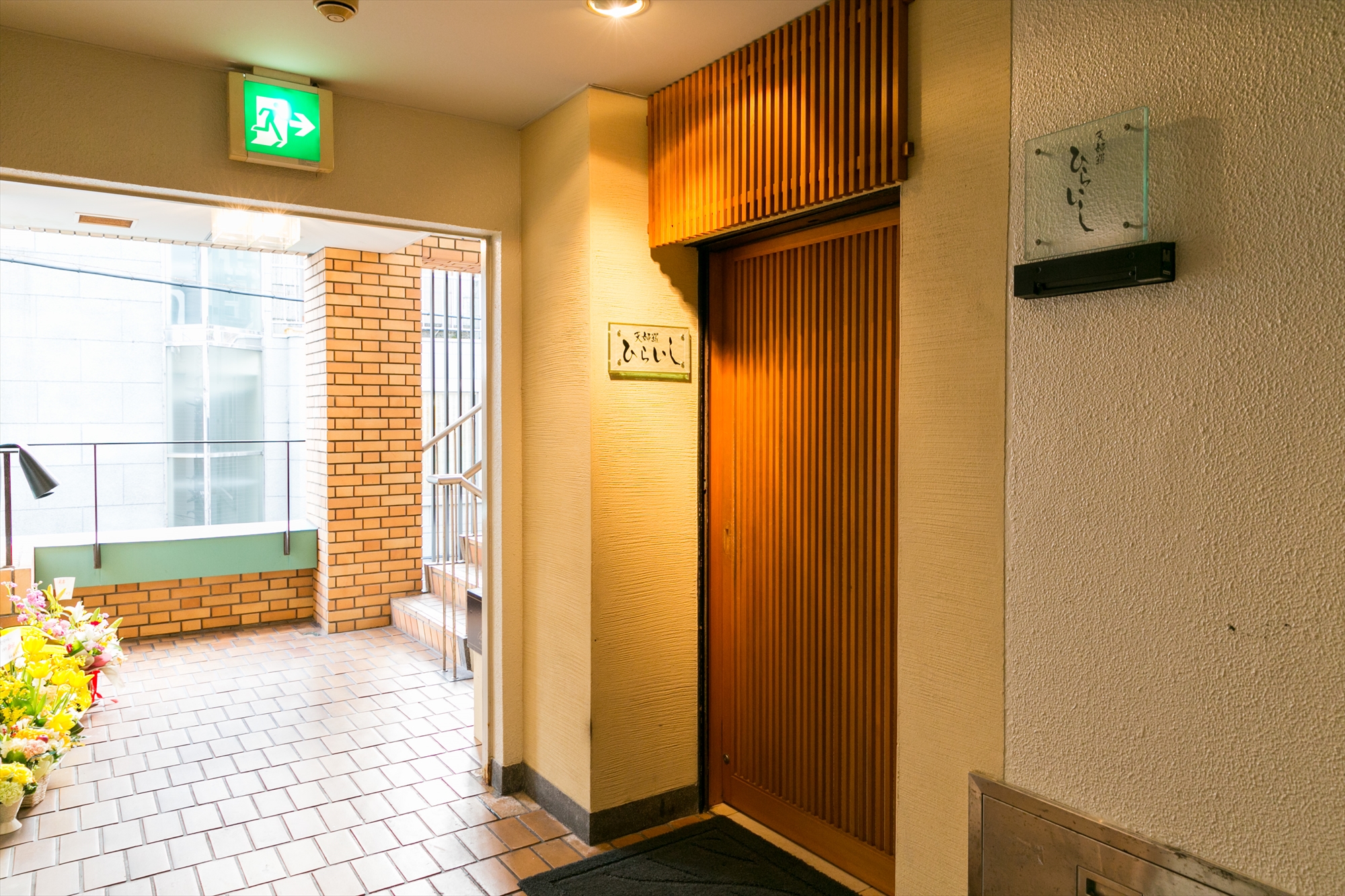