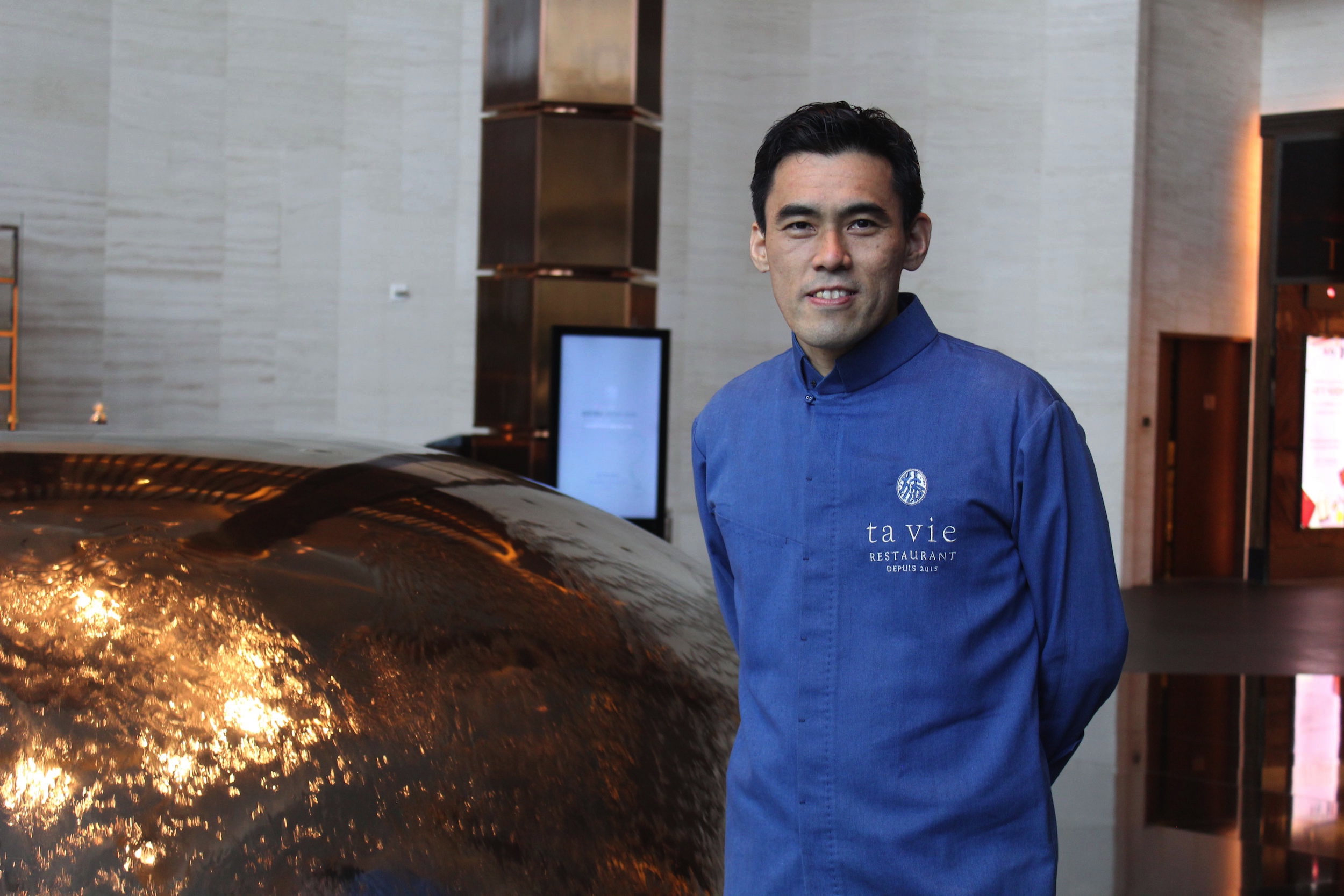 After working as an executive chef at a branch of the famous French restaurant Hermitage de Tamura in Karuizawa, he turned from his career in French cuisine to learn Japanese cooking through working at Ryugin. He was sent to Hong Kong as the executive chef of its first overseas branch, Tenku Ryugin. Earning two Michelin stars from the very first year, he decided to open his own restaurant three years later, a brilliant achievement that earned one Michelin star after several months, two the following year, and was subsequently ranked in "Asia's 50 Best Restaurants." As far as whether he was meant to be a chef, he says that is not the case. He was here before he realized it. The key to success was to focus on and be engrossed in the step right in front of him. 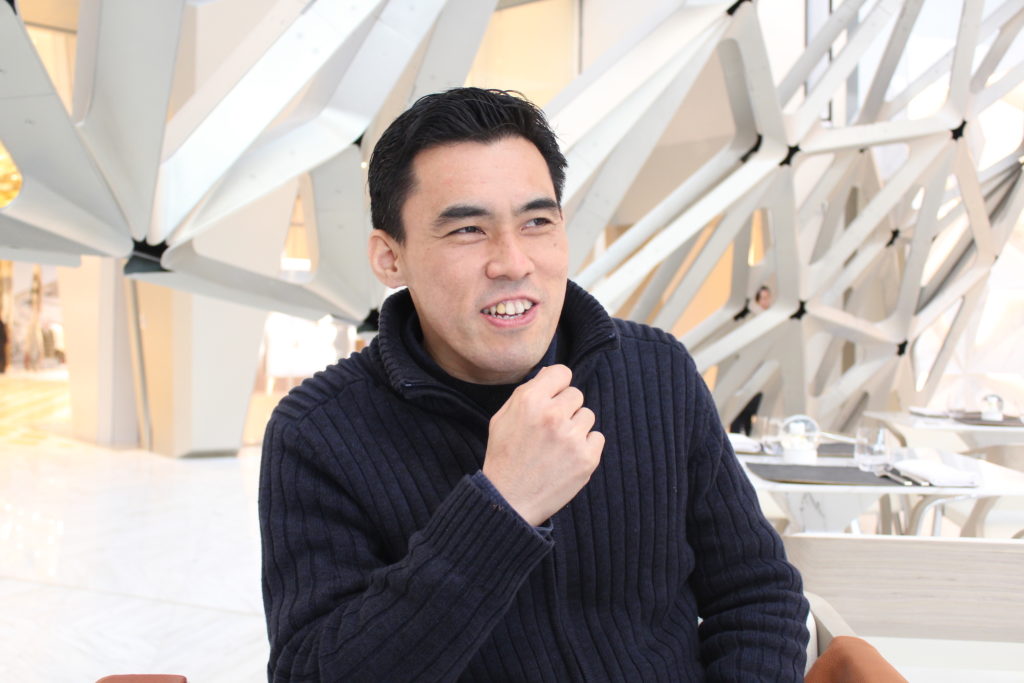 “Becoming a chef was not an option in my life.”

Did you know you wanted to be a chef since you were young?

Mr. Sato:
No; rather, I thought that being a chef was not an option in my life. I was a picky child, and I hated onions, carrots, and pork, and ate almost no vegetables. It must have been tough on my mother.

Now, when I have customers who have a lot of dietary restrictions, it sometimes reminds me of my younger self. Although in my case it was not allergies, but just dislikes.

So even you went through that phase! Did something happen to make you less picky?

Mr. Sato:
I got a part-time job in a restaurant, and when I ate the staff meals, I gradually started to be able to eat more things. I think I had a strong feeling that I shouldn’t leave any food behind at staff meals. When I actually tried eating those things as an adult, I realized that for some of them, I thought I disliked them without even tasting them.

You are originally from Nagano, right? What were you like as a child?

Mr. Sato:
Yes, but I lived in the mountains of Nagano, so before I started school I was really into catching rhinoceros beetles and stag beetles. If I didn’t wake up early, someone else would get them, so I would get up at 4:00 a.m. and walk around the mountains alone, four or five kilometers, to catch beetles.

When I think about it now, it was still dark at that hour and there were cliffs on the mountain roads, so it was a bit dangerous for a young kid. I had a brother who was four years older than me, but my brother wasn’t interested, so I was completely involved in it by myself.

That’s the kind of person I am; I get involved in something and forget everything else, but when I started elementary school, my passion shifted from catching bugs to playing soccer. I was an early riser, so I wanted to practice in the morning, and even though there was no reason for it, I would go before the school gates opened and wait. There was something about the quiet, empty school grounds and soccer field that I liked.

It’s a bit like going into the mountains alone to catch rhinoceros beetles.

Mr. Sato:
Maybe that was it. Even now I enjoy being the first to get into the kitchen, to go in and start working in an area with nobody there. It’s like I can set the mood in the room. I guess I must like starting with a blank canvas.

Do you feel like you still use your soccer skills?

Mr. Sato:
I was immersed in soccer through elementary and middle school, and what I learned was to have a wide outlook. In the kitchen as well, you must have a wide field of vision to see where things are falling short, just like in soccer. I wanted to be a professional soccer player at that time, but then I went to high school and I didn’t have the confidence to go further, so I quit soccer. 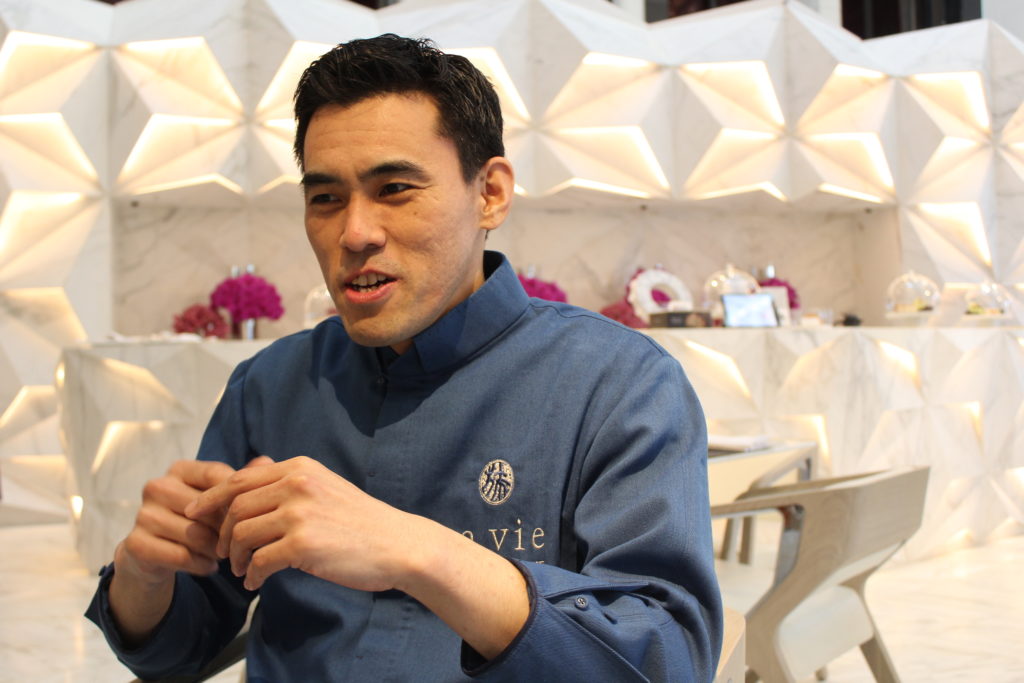 Soccer player, fashion designer, novelist. The path he followed leads to the present

Mr. Sato:
From there I began to wonder which way to go, and my next dream was to become a fashion designer. When I was in high school, I used to watch the Paris Fashion Week on television.

Now I don’t have time to enjoy fashion itself, but there is some overlap with restaurant work. In fashion there are trends in different eras, but still, the basics of color combination and what people like don’t actually change much.

The culinary world is the same. There are trends in plating and cutting styles, but even if the plating or the appearance changes, there are no crazy revolutions in the fundamentals of color and ingredient combinations.

For example, the sauce and sides that go with duck have varied due to trends, but they really haven’t changed much from long ago. Cooking and fashion are alike in that way, I think. So just like fashion, there are two ways to look at cooking as well: the trends and the classics.

But with fashion, once I reached the age when everyone is interested in being stylish, I actually got tired of it. In Nagano, there was nowhere to buy or see haute couture, so I gradually lost interest.

My next dream was to be a novelist. I actually didn’t read any books at all until I was about 18. I hated reading time and Japanese class, and there were many characters I couldn’t read. But in my high school Japanese class, I had a shocking encounter.

My textbook mentioned the book The Moon Over the Mountain by Atsushi Nakajima, and when I read it, it had a deep impact on me. I think that a good book makes you feel that you have learned something about yourself, and I felt that the story about the man who was too prideful and turned into a tiger was really describing me.

I began to devote myself to literature, thinking that it was fascinating to portray what was in people’s hearts, and for about three years I read everything I could get my hands on. I thought it was amazing that writing meant being able to construct a world with no building materials but letters.

I read not only literature, but also criticism, which helped me develop my ways of looking at one thing, and gave me the habit of thinking about things. I also learned about how to look at something objectively, and how to think. 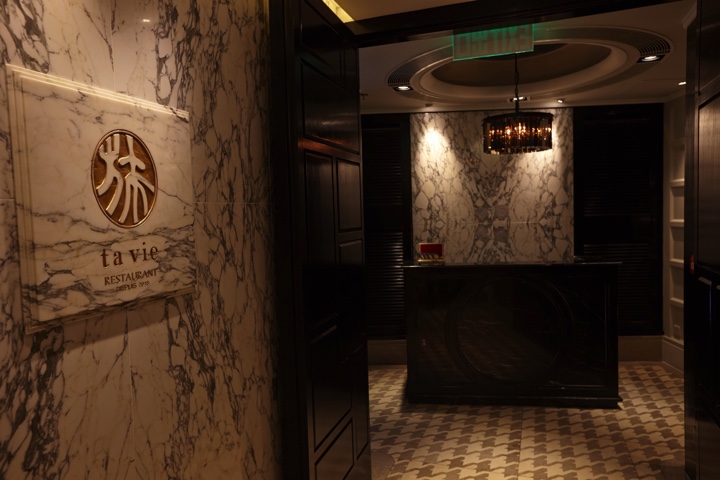