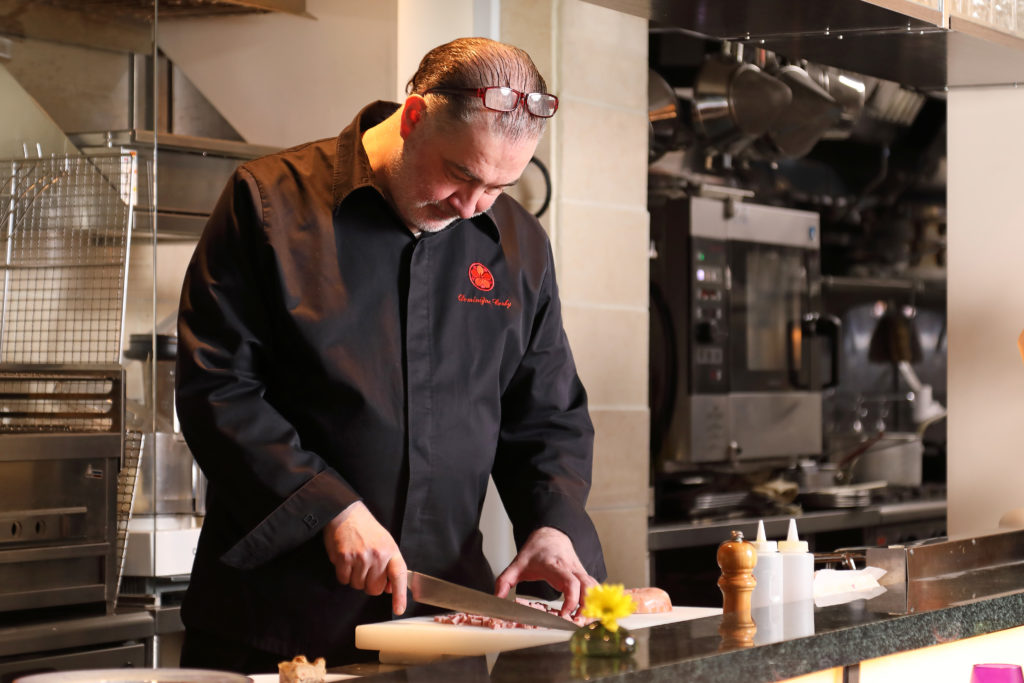 Exercising my talent and being attracted to Japanese food culture.

At La Tour d’argent you were sous chef. Were you able to work well from the start as a head chef in Tokyo?

Dominique：
La Tour d’argent Tokyo was one of the highest class restaurants in Japan back then. There were 100 seats. It was the best setting for me. I led 25 staff, and the sous chef who worked right under me, while I was 28, was 45 years old.

All staff was Japanese. Communication in the kitchen was done in Japanese only.There was no French or English. When I first came here, I could not speak a word of Japanese, but the kitchen and culinary vocabulary were understood and we could communicate using gestures. It wasn’t that much of a hustle.

When it came to ingredients or staff, was there anything that you felt was very different between France and Japan?

Dominique：
The ingredients are totally different. But I was very satisfied with staff who worked with me back then. There were many who were hard-working and very eager, so the environment was good. People who want to learn more and grow work hard, no matter the time, and listen to people carefully. There were many people that I respected, so it was a great environment. My trainee back then is now an executive chef at New Otani.

Did you eat around at many restaurants after coming to Japan?

Dominique：
I did. There was a network of French chefs so we often went to L’Osier (*3) for French. It was way before Robuchon(※4) was opened in Tokyo.。

I also went to eat Japanese food many times. It was a kind of culture shock seeing the ingredients and the food culture, and I was able to learn a lot. We should look for the value and appreciate the materials that the Japanese sometimes take for granted, like wasabi, miso, soy sauce.Foreign chefs go well out of their way to come and learn about these wonderful Japanese ingredients.Perhaps the Japanese do not notice the culinary value and rich culture of their own country.

*3: L’osier
French restaurant opened in Ginza, Tokyo in 1973, and one of the best grande maison in Japan. Currently holds two Michelin stars.

*4: Taillevent Robuchon
The gorgeous château restaurant with Louis dynasty-style decor opened in Ebisu Gardenplace in Tokyo in 1994. It became an object of adoration by many gourmets but was closed in July 2014. Joël Robuchon has opened a new restaurant in the same building.

You deepened your interest in Japan’s ingredients and cooking methods. Did you integrate Japanese ingredients into the food you served at La Tour d’argent Tokyo?

Dominique：
La Tour d’argent Tokyo was a restaurant that served traditional French cuisine, and that’s what customers expected. Though I was interested in Japanese foods, such as taro roots or lotus roots, we only cooked classical French cuisine at the restaurant.

I started creating dishes integrating Japanese accents a while later. I was sort of adding Japanese materials little by little over the course of my eight years there. But one of the reasons I resigned was because I wanted to use those ingredients more freely. 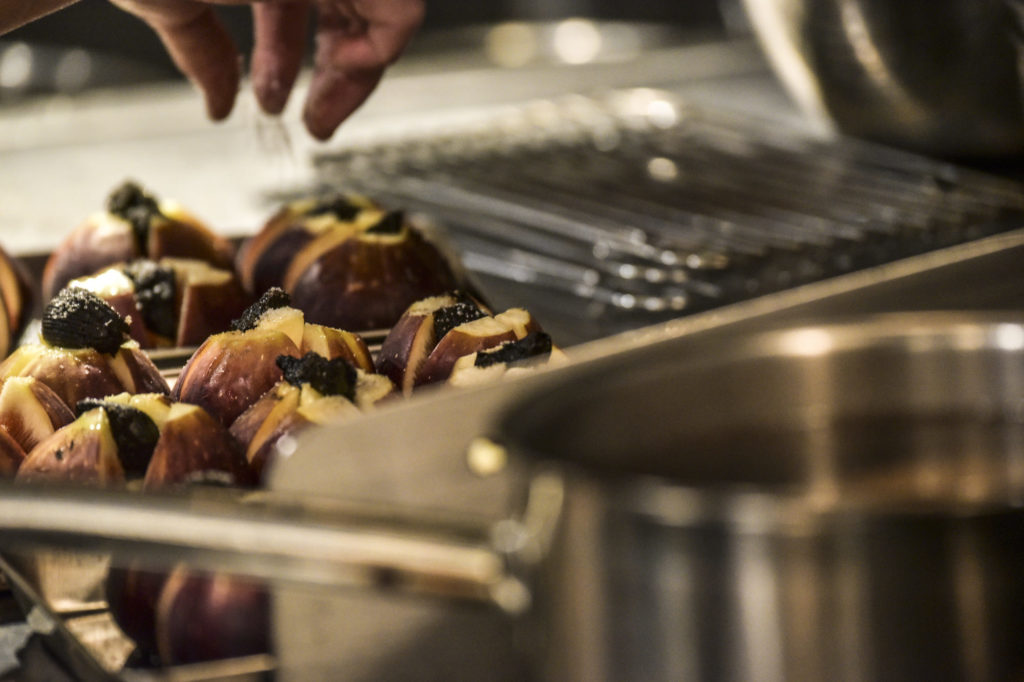 After resigning La Tour d’argent Tokyo at the Hotel New Otani Tokyo, where you stayed for eight years beginning in 1994, you moved to Osaka.

Dominique：
In 2002 I moved to Hotel New Otani Osaka. I was serving as executive chef at the restaurant Sakura in the hotel. I was also executive chef of French cuisine while I was there. I had lived in Tokyo for eight years, and then I happened to live in Osaka for the same amount of time.

What was the biggest thing you gained by living in Osaka?

Dominique：
I was able to learn a lot about Japanese ingredients. I was also engaged in food events with chefs from different genres; other chefs of Japanese or French cuisine. I also visited the producers directly. As I studied the local ingredients, I grew even more attracted to them.

Out of all of them, most interesting was a series of articles about traditional Osaka vegetables published in the gourmet information magazine Amakara Techo (*5).It was a series of columns, written in collaboration with Mr. Shuzo Ueno (*6), that lasted two years. I would come up with recipes for French dishes that used the traditional vegetable that Mr. Ueno wrote about each month.I learned many things from this experience.

*6: Shuzo Ueno
Food researcher based in Osaka. The originator and chairman of Osaka Ryori-kai (Osaka Culinary Association). He was named a “Contemporary Master Craftsman” by the Ministry of Health in 2013 for his achievements in preserving and spreading knowledge of ingredients native to the Osaka area, as well as reviving Osaka cuisine when it was in decline.

After taking a long time to gain a deep knowledge of so many Japanese foods, what is the most interesting of them all?

Dominique：
With so much experience over more than 20 years, I now pride myself on knowing Japanese foods best out of all the French chefs living in Japan!The more I study about Japanese ingredients, the more my interest grows.

But I cannot pick only one favorite! People do not eat lotus root in France, but I like them a lot. Well, ginkgo, taro roots, young tubers… I like them all. Just touching the ingredients brings a rush of inspiration; it’s very exciting.

Even during this interview, you’re doing prep for dinner service, and you seem really enjoying.

Dominique：
I love doing careful prep work with the ingredients like this. It is a sober process but I want to do it myself, not give it to someone else to do. Talking to the food like this really helps when creating new menus!

I am good at slicing accurately… See how the weights aren’t even off by a single gram? 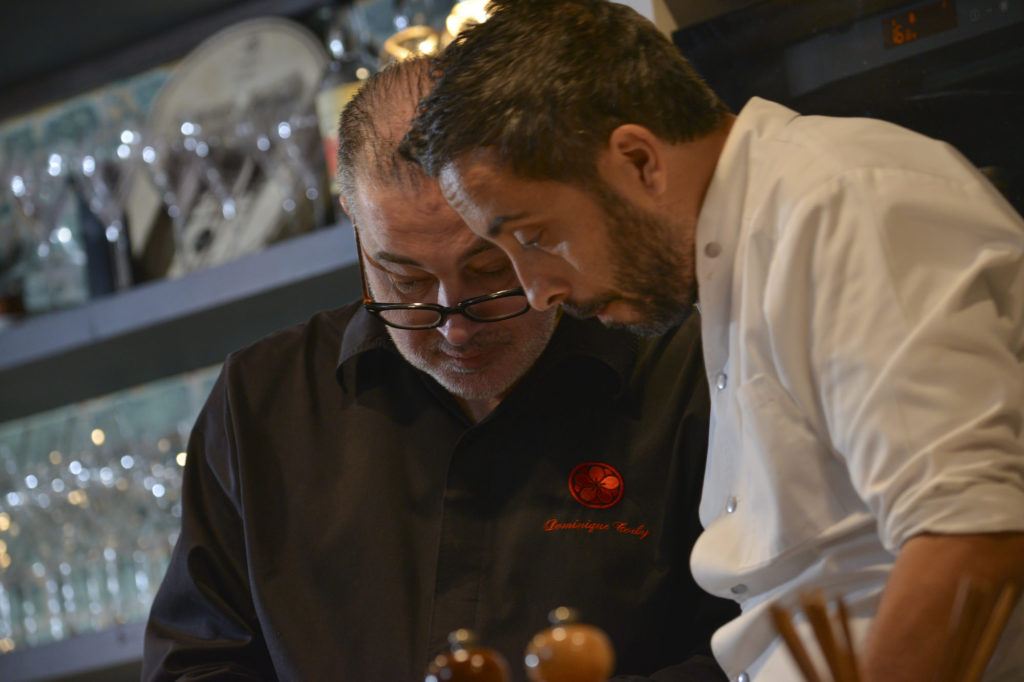 Incorporating French cuisine into “counter-kappo” that he had been longing for, to try a brand-new style

After flourishing at hotels in Tokyo and Osaka for the total of 16 years, the restaurant in Ginza where you served as gastronomy producer obtained a Michelin star for 4 consecutive years.

Dominique：
I left New Otani Osaka and I moved to le 6eme sens d’ Oenon, a street-level store opened on 7th Avenue in Ginza in 2003. From the time of my arrival in Osaka, I had been asked to open a restaurant in Tokyo.

It was a French restaurant with around 25 seats, but a cafe bar was also included so customers could enjoy a casual lunch for about 1,500 yen. From the street, you could see the wall of wine through the glass, and the salon on the basement floor was full of art by Ms. Yoko Yamamoto, a printmaker. It was a restaurant with a good atmosphere and specialty interiors. I exercised my talent with the title “gastronomy producer.”

But along the way, the management had changed and there was a premonition that this restaurant in Ginza would not last long. It also became a chance to strengthen my resolve of having my own restaurant.

Soon after that, in May 2015, you opened French Kappo Dominique Corby.When did you start imagining that you wanted to make it “counter-kappo” style?

Dominique：
When I moved from Tokyo to Osaka, I noticed that the cultures of Kanto and Kansai were very different, but most especially the liveliness and way they improvised at counter kappo in Kansai was very attractive. In France, there are no restaurants where you eat along the counter kappo style. There are bar counters, but they do not cook there, so it is totally different. At any rate, that counter kappo style where a chef cooks in front of the customers was new to me.

I started to think that if I open a restaurant, I would want to cook at the counter while seeing the direct reactions of the customers in front of me. I was deciding the style specifics of integrating French cuisine with Japanese counter-kappo while I was working at the hotel in Osaka. It was five years ago that I actually decided to start “French kappo.”

It was the birth of a new style, “French kappo”!What were you most particular about when it came to the French food that you served?

Dominique：
By utilizing connections with producers all over the place for over 20 years of my stay in Japan, I knew I wanted to serve French cuisine with particular ingredients and broths that were classic but modernized. My concept was essential: French cuisine that hardly ever uses butter, cream, or flour, and that is gentle on the stomach. I proposed a marriage of Japanese and French with my favorite Japanese sake, as well as wines.

What was the toughest part ahead of opening your own restaurant?

Dominique：
In March 2015, I finally opened the restaurant in Arakicho, Shinjuku, but it was hard finding a good place, and I struggled. The reason I chose this area, Yotsuya, is because my house is near.Since my time at La Tour d’argent Tokyo I have lived around Yotsuya, and now my commute was as short as possible.

How is the working style different between when you were an executive chef on the front line of the hotel, and standing at the counter to serve and cook like you are now?

Dominique：
It is totally different. Now there is a fun part of cooking, like having chat sessions with other staff. But at La Tour d’argent Tokyo I did not cook in the kitchen at all. Being able to serve food to many customers is a strength that only hotels have, but thinking about new recipes and doing interviews are the roles of an executive chef. Once you make a perfect dish and show it to staff, you are hands-off after that, in the field, an executive chef does almost no work at all.

I love making menus, but sitting in front of a computer to write recipes is not fun.It is much more fun to cook in front of customers like I do now. I think I have stronger desire to cook by myself. 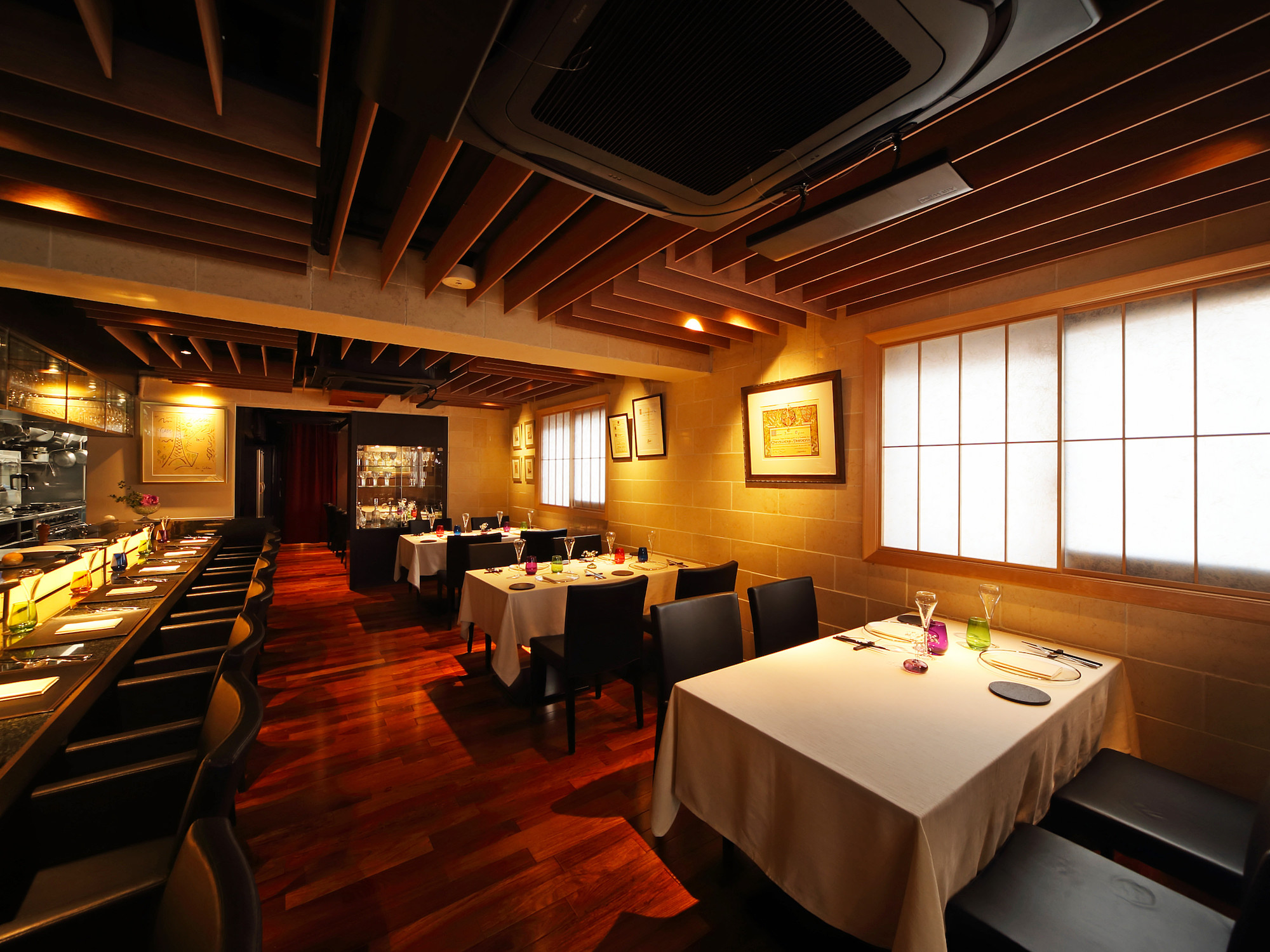