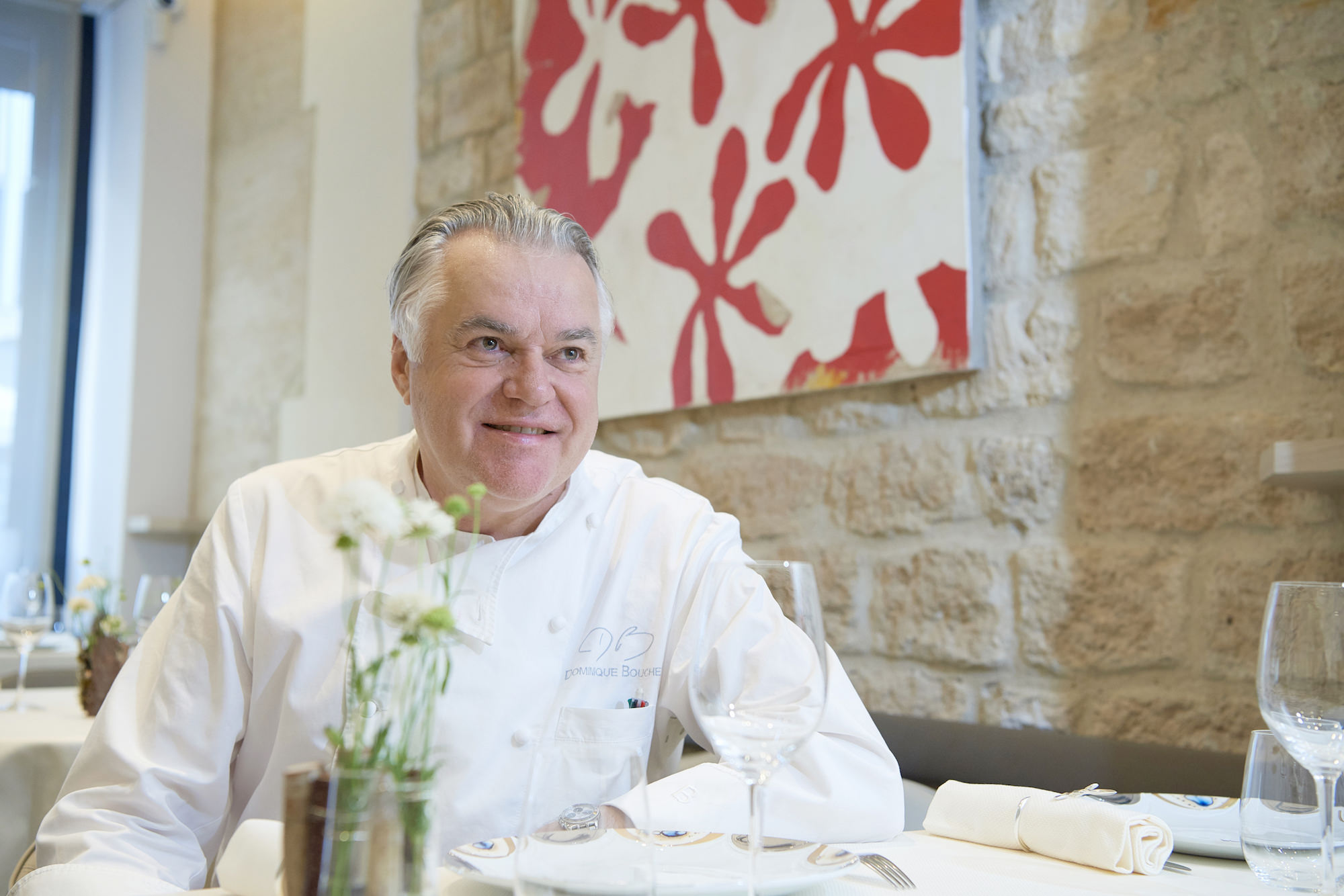 Dominique Bouchet, a recipient of the Legion of Honor, was born in 1952 in the Charente Maritime department. He has been the chef at such prestigious establishments as Jamin, La Tour d’Argent and l’Hôtel de Crillon, in that order. His current establishment in his own name is located on a quiet street in central Paris’ 8th arrondissement, close to the Elysée Palace. The décor is a simple grey and white. The chef is busy there from early morning. The chef’s way of life, with its lifelong pursuit of fine cuisine, is revealed in the simple, tasteful, and memorable arrangement of his food. He doesn’t promote himself so much, but other who have trained under him, and are now flying with their own wings, recall the resourcefulness of this chef constantly bringing up new projects. Let’s ask this chef, who travels back and forth between Paris and Tokyo every three weeks, what he is serving in each restaurant and how he sees both France and Japan. 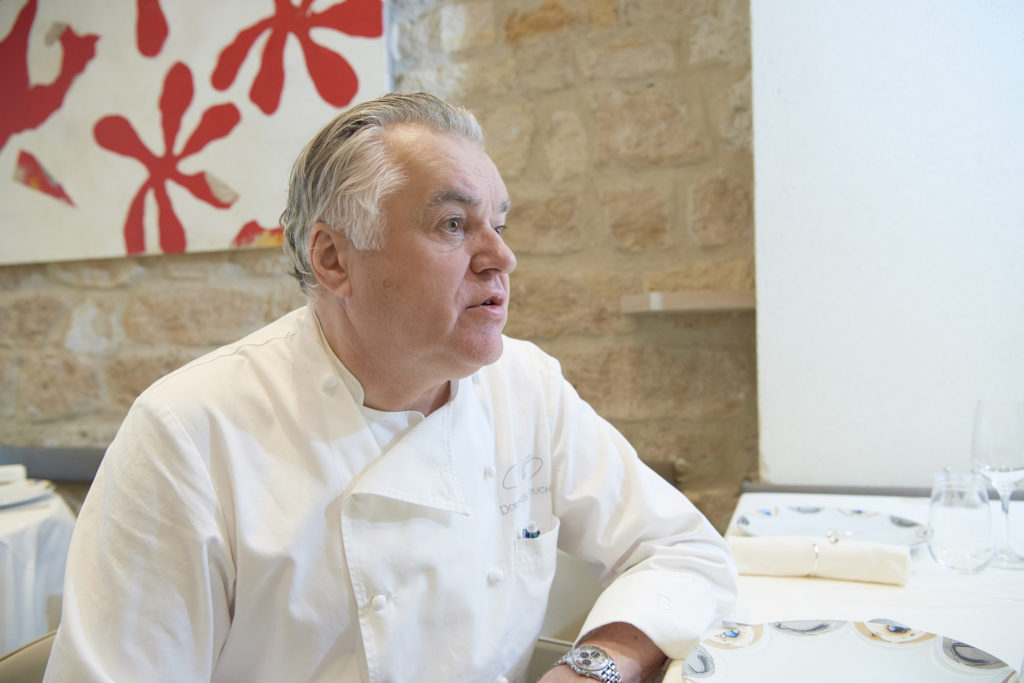 At age twenty-four, he was chef of the two stars Jamin.  After that, he was able to maintain three stars at La Tour d’Argent for seven years.

Why did you choose cooking?

Bouchet:
I discovered cooking when I was eight years old. I used to rush back from school to watch Reymond Oliver ‘s cooking program on television. He was the owner and chef of the restaurant Le Grand Véfour in Paris.
I was thirteen when I started working in a restaurant, but until age sixteen I was also going to school every other day. The educational system has changed since then – you can’t do this nowadays.

At age seventeen, you came to Paris on a 12-hour long train ride. How did you choose the restaurant where you worked in Paris?

Bouchet:
The chef of the restaurant I was working for called a friend, and told me I would be going there to work. I was young and I didn’t really have a say. It was La Maison de Bretagne, a restaurant that offered and promoted ingredients from the region of Brittany, such as lobsters and other seafood, cider, butter… I stayed there for two and a half years. After that, I worked at La Péniche Ile de France, where I first met Joël Robuchon. He is seven years older than me, but he was still very young at that time and had just started his career. At age nineteen I had to serve in the military – it was compulsory at the time and I was a secretary. Afterwards, Joël Robuchon called on me to join him for the opening of the Concorde La Fayette. And later when Robuchon was getting ready to leave for the Hôtel Nikko, he recommended me to the Jamin, who was looking for a chef. That’s how I got my first chef position. I was 24 years old.

It’s hard to believe that you were a chef at 24.

Bouchet:
The times were harder then than now. I stayed at the Jamin for three years, then moved to Marielle, a restaurant in the 16th arrondissement. In 6 months, I earned one Michelin star. I was beginning to become known, so when La Tour d’Argent needed a new chef, Robuchon recommended me again. That put me in charge of a three star restaurant for the first time. When La Tour d’Argent opened their restaurant in Tokyo, I was sent there supervise the opening. And thus, began my adventures in Japan.

Do you consider La Tour d’Argent’s cuisine to be very traditional?

It was very classical, but I changed a lot of things. There were so many duck dishes – I decreased the number and I brought a touch of modernity. I stayed there for eight years. 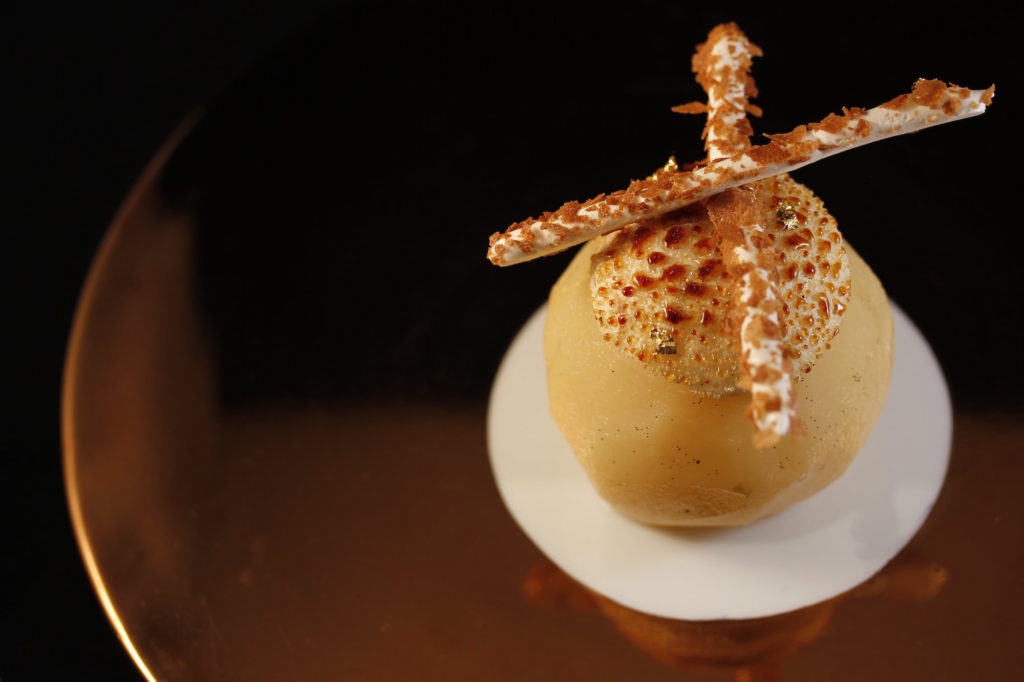 A chef’s career and a business in Japan

When you were working for Joel Robuchon at the Concorde La Fayette or at the Jamin, it was more modern, right?

Yes, it was – very different from the classical cuisine. After that, in 1988, I opened my own hotel restaurant called Le Moulin de Marcouze near Cognac. We earned two stars right away, and I stayed there for ten years. When I was 45, the Crillon offered me the opportunity to be their chef at the hotel. The conditions were very attractive, so I accepted, selling my establishment in Cognac to return to Paris. After seven years as a two-star chef at the Crillon, I then decided to open my own restaurant, Dominique Bouchet, in the 8th arrondissement.

In 2013, we opened our first restaurant in Tokyo, right by Ginza’s Mitsukoshi. I already had a consulting company in Japan, Atelier DY, but this was my first restaurant. We obtained two Michelin stars right away. Then we decided to move to a new location, Ginza Ichome, and there too, we earned two stars right away. In June 2016, we opened a Bistro, also in Ginza. It is small but very cute, it’s called Les Copains de Dominique Bouchet – you should try it!

Tell us about your consulting business in Japan.

Bouchet:
We offer advice not only on culinary matters, but also on service and organization for restaurants, hotels, and a wedding planning company. I have worked with a lot of Japanese people – for instance Kihachi Kumagai from “KIHACHI” – he is a longtime friend. We began our careers together at the Concorde Lafayette. Also, there’s Mr. Konno of “Ukai Tei” and Mr. Tashiro of “La Blanche”, whom I have known for a long time. There are many other Japanese chefs who have worked with me or have come for training. Now they work here and there all over the country. My Parisian chef Masa (Mr. Masaki Haraguchi) has worked with me for eleven years now. 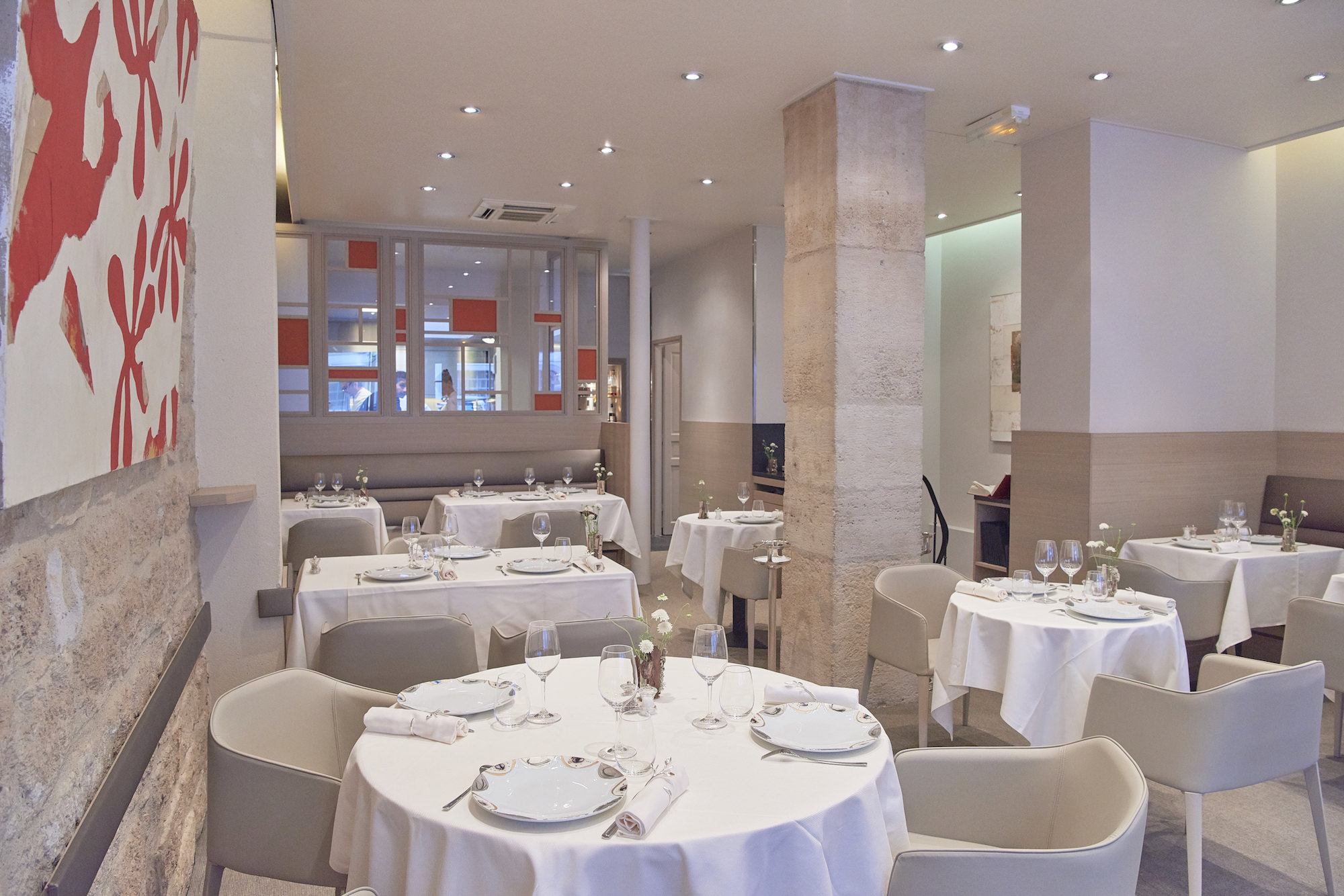 Closed
Closed on Saturdays and Sundays