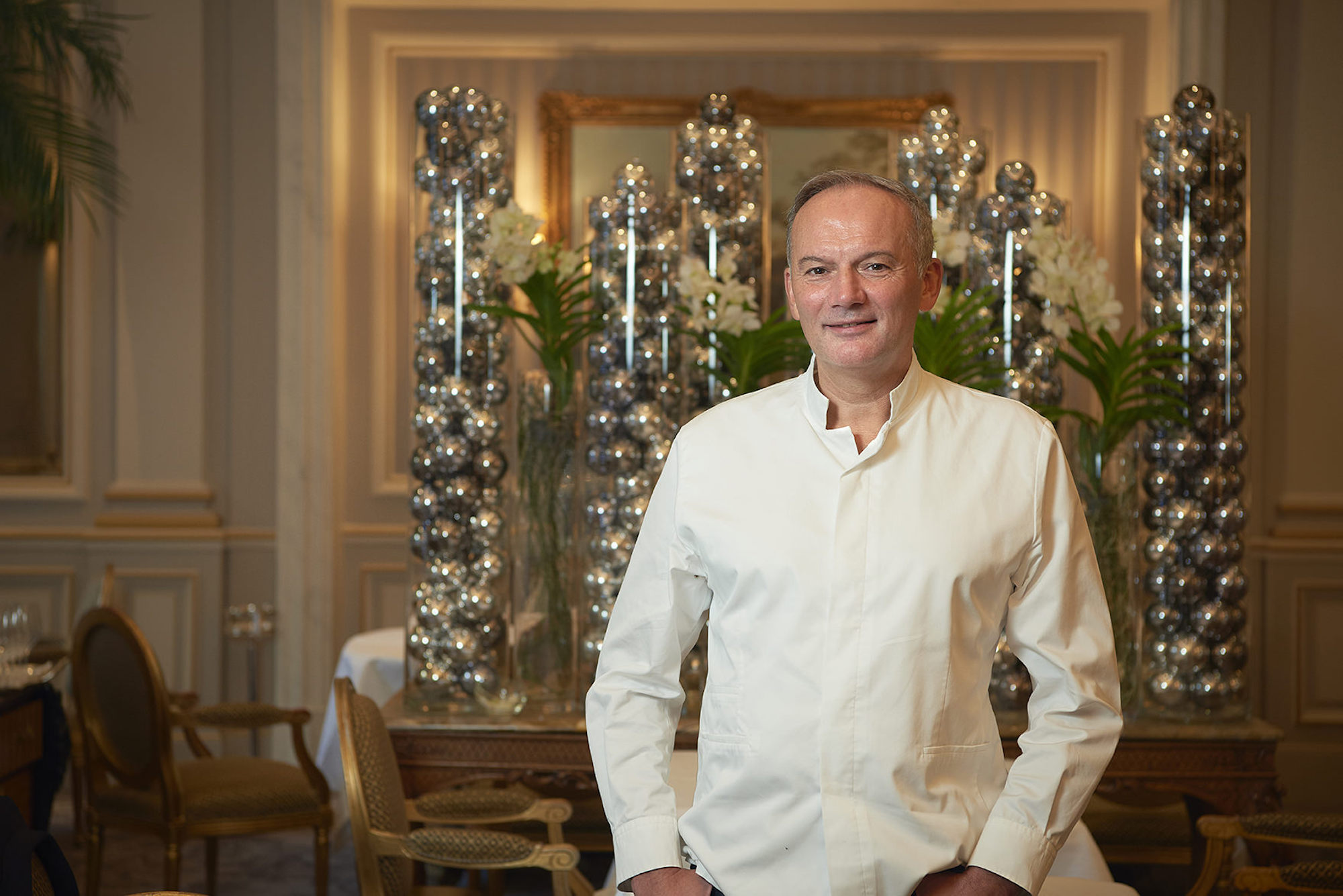 We have interviewed the famous chef who has over 210 000 followers on social media. After keeping his three stars for 12 years at Ledoyen, a restaurant in a mansion that seems to have come straight out of a French painting, Le Squer was promoted to the executive chef position at the lavish luxury Four Seasons Hotel George V, where, within a year, he was again able to earn 3 stars. In 2017, the two other restaurants at the hotel obtained their respective star, bringing the Four Seasons Hotel George V Paris, at the center of attention as the first hotel in Europe to host tree stared restaurants. 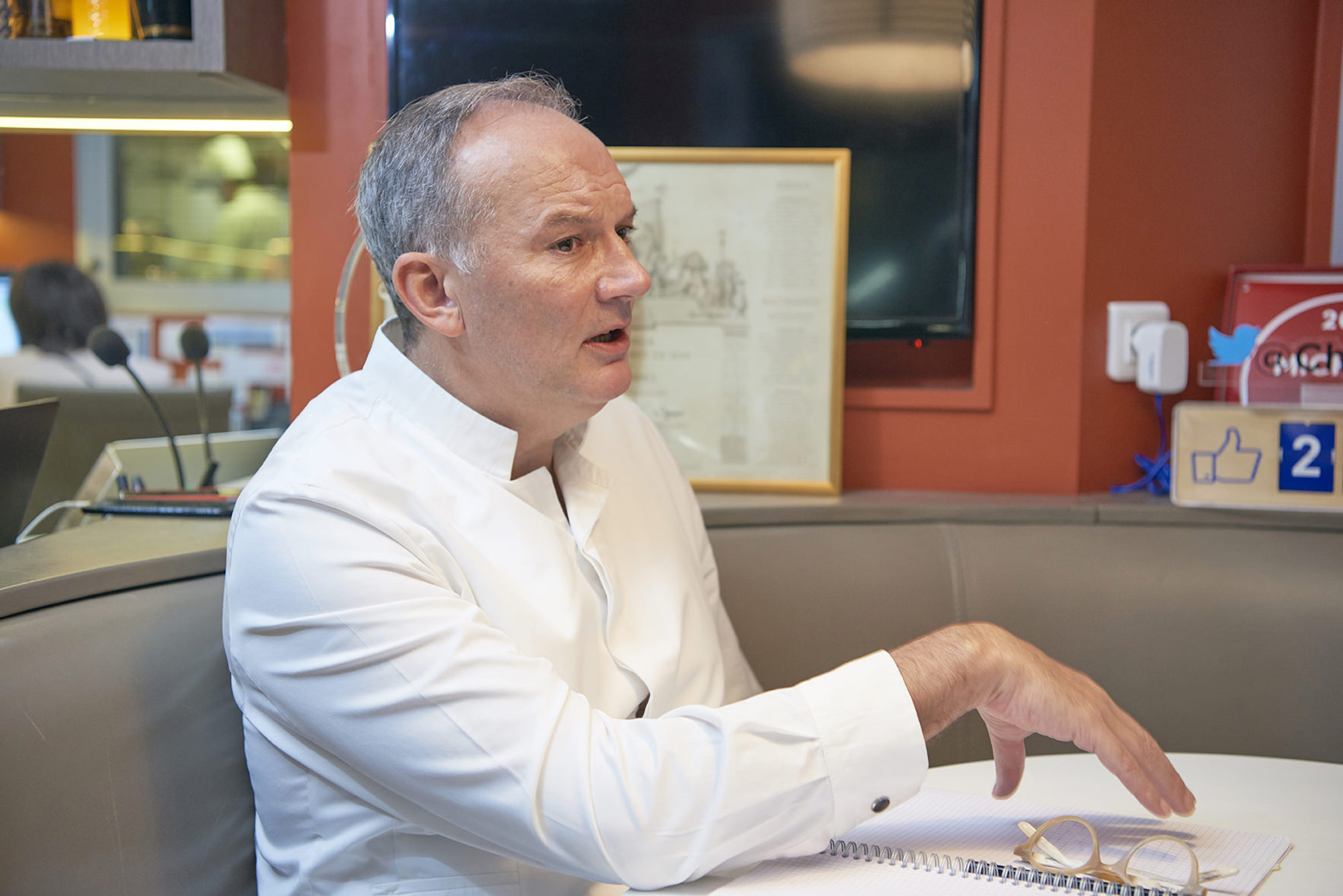 A 3 star chef is someone that creates trends

In 2016 you were elected Best Chef in the magazine “Le Chef”.

Le Squer:
Yes, it was great. At Ledoyen there was no press agent and I wasn’t doing any active promotion either; but after coming to the Four Seasons Hotel George V, the media coverage really increased.

A chef keeps on growing and cuisine keeps on evolving. I can pride myself on bringing something they never had before to a “palace” (Palace is the highest rank in luxury hotel in France; it was awarded to only 8 hotels in Paris, in 2016). I’m not cooking a “palace” cuisine, I’m cooking an artisan’s (craftsman) cuisine in a palace. I use luxury ingredients as well as good simple ones, what’s important is that all my dishes are signed Christian Le Squer, and my clientele really appreciates my style of cooking.

What should you pay special attention to, when cooking in a palace?

My cooking is based on a classical Parisian foundation with sauces, but revisited to make it something different, to give it my imprint. I pay attention to what is important today, to culinary and health trends; because patrons come for the signature dishes of a chef who is in tune with the times.

You became the center of chefs’ attention while actively posting on social media.

Whether it’s couture or perfume, I like to know how things develop, follow trends. I like to keep my eyes and ears open for what is happening out there. 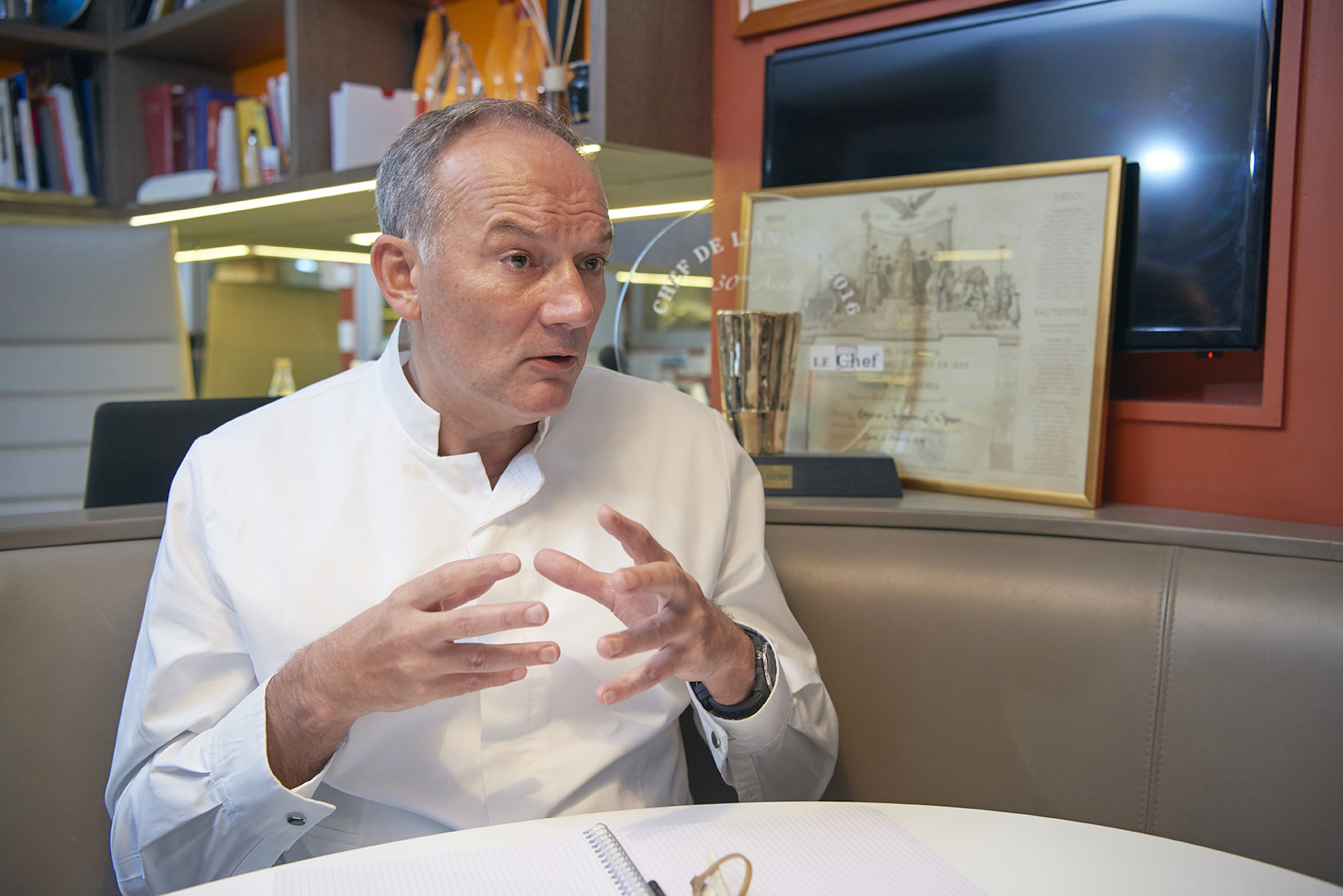 Growing up with great enjoyment

Could you tell us about your background?

Le Squer:
I was born in Plouhinec in 1962. First I wanted to be a sailor. Then I discovered the cooking world on a boat and embraced this path. I started working at age 14.  After coming to Paris, I worked for Le Divellec, Lucas Carton, Taillevent, and Le Ritz. Then I was hired, as a chef, at the Grand Hotel InterContinental’s Café de la Paix. The following year, I earned my first star, and the second, the year after. In 1999, at age 39 I moved to Ledoyen, and you know the rest.

How did you start a Ledoyen?

Le Squer:
The mansion of Ledoyen belongs to the City of Paris. We had a 15 year lease. I came with my team and we had investors participating as shareholders, I was a shareholder too. The previous tenant didn’t have any stars, but in 2002 we earned 3 stars. It was the first time that Ledoyen ever had 3 stars, and I kept on like this for 12 years. At the end of our 15 year contract, we passed the concession on to Yannick Alléno.

You must have been fairly confident of your future success to buy a concession in an establishment as reputable as Ledoyen.

Le Squer:
No, not really. Ledoyen enabled me to become an adult, and gave me a sense of fulfillment. The shareholders protected me, and let me grow as a leader in the kitchen, as a business man and as a shareholder.  It enabled me to become a decision maker, a team leader. I was able to flourish personally and publicly while enjoying my work at Ledoyen.

Please let us know about your move to the Four Seasons.

Le Squer:
The Four Seasons is one of the most beautiful palaces in Paris. I brought in my own way of working, and the management team was astonished. The Four Seasons managing director told me, “You can’t serve boudin (blood and fat sausage) at the Four Seasons.” but he eventually fell in love with my boudin. We can serve anything here, even boudin. We also serve dishes made from simple ingredients such as sardines.

I had to teach my methods and make everybody accept them. The Four Seasons staff were surprised and overwhelmed; it went against their assumptions. I didn’t come to take an easy path, take advantage of the hotel’s fame and clientele, and fall into a routine. In my contract, I’m here 4 days a week. I could rest at home for the other 3, but no, I’m working 6 days a week. A grand chef is like an orchestra conductor; he has to produce the best harmony to entertain the clients. 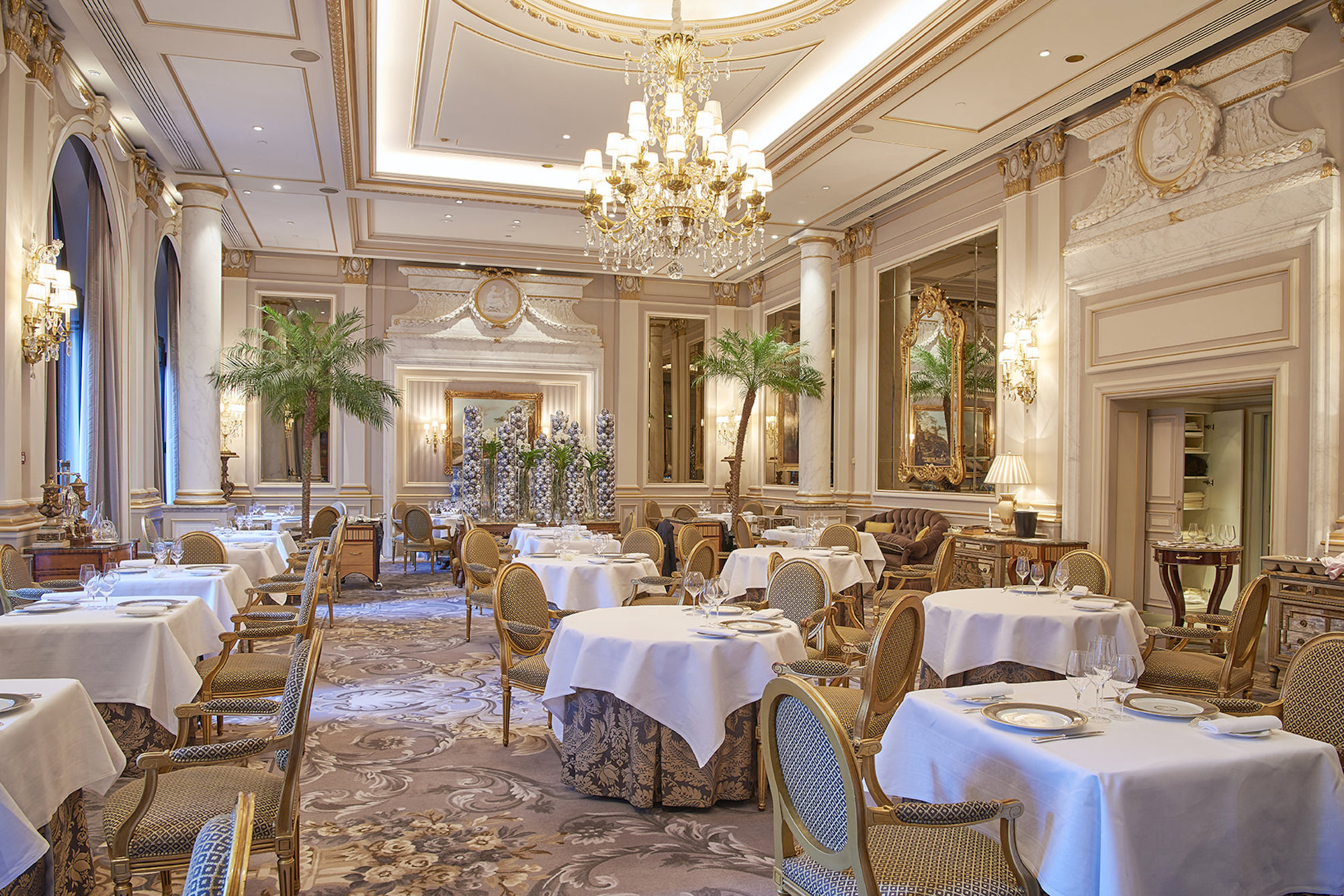