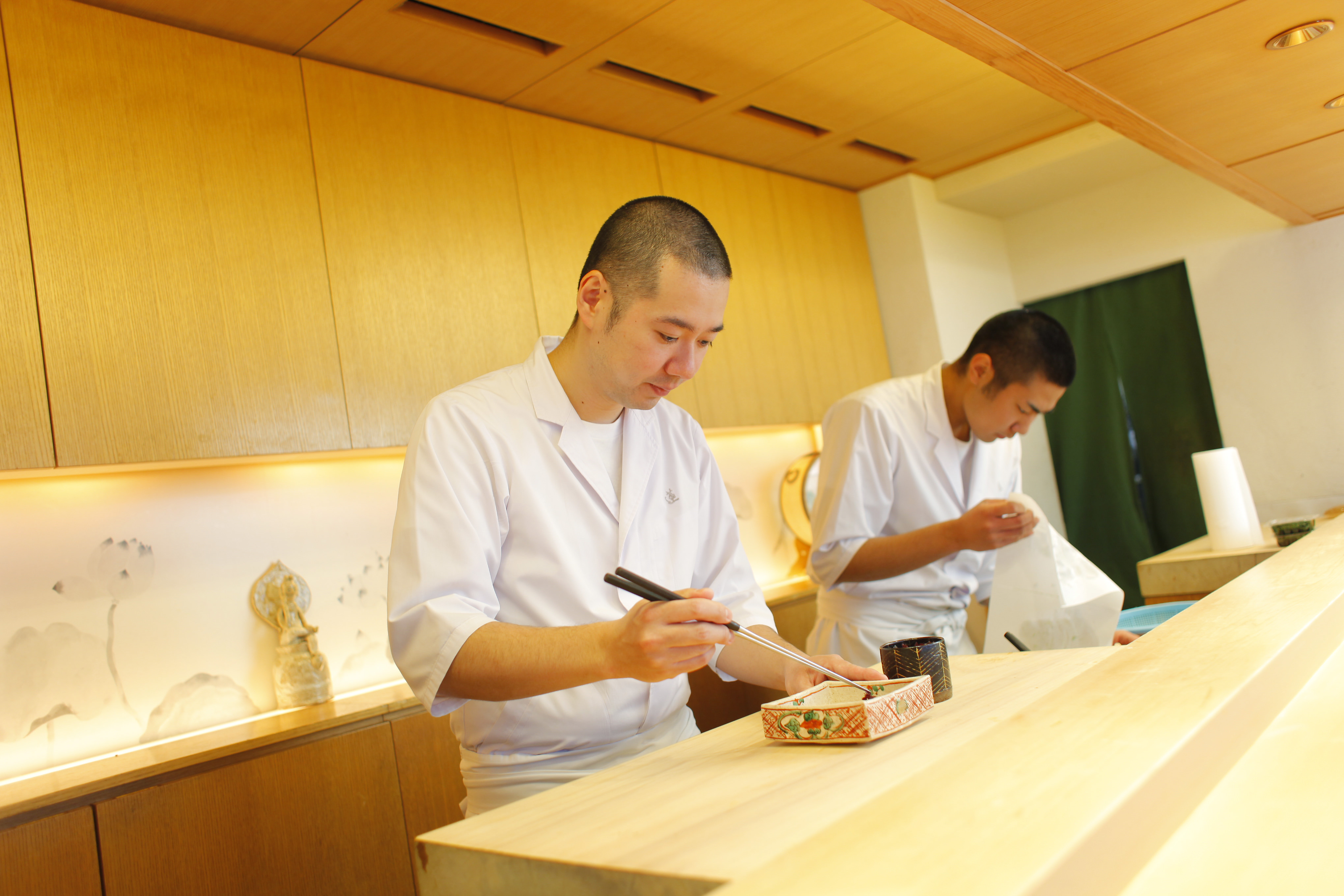 “Ren,” opened in 2009 as a sister restaurant to Kagurazaka“Ishikawa,” is a Japanese restaurant mainly with counter seating. It is managed by 3 young staff including the executive chef, Jun Mishina (32 years old). Even though it is located in a building on the busy Kagurazaka-dori, take one step through the latticed entrance to see the tranquil atmosphere of the restaurant. There are 2 chef’s choice courses on the menu (￥12,000 and ￥17,000). You can sense the solid techniques that faithfully bring out the inherent flavors of the ingredients in various dishes.

Mr. Mishina served as a Nikata chef at “Ishikawa” since he was 23 years old, and became the executive chef at “Ren” when he was 30 years old. The restaurant has earned 2-star rating on “Michelin Guide Tokyo 2016.” While he seems to have had a smooth sailing in his career as a chef, he says there was a time when he almost left his training. He told us about how he overcame that period and how he grew from it, and also his considerations in building his restaurant. 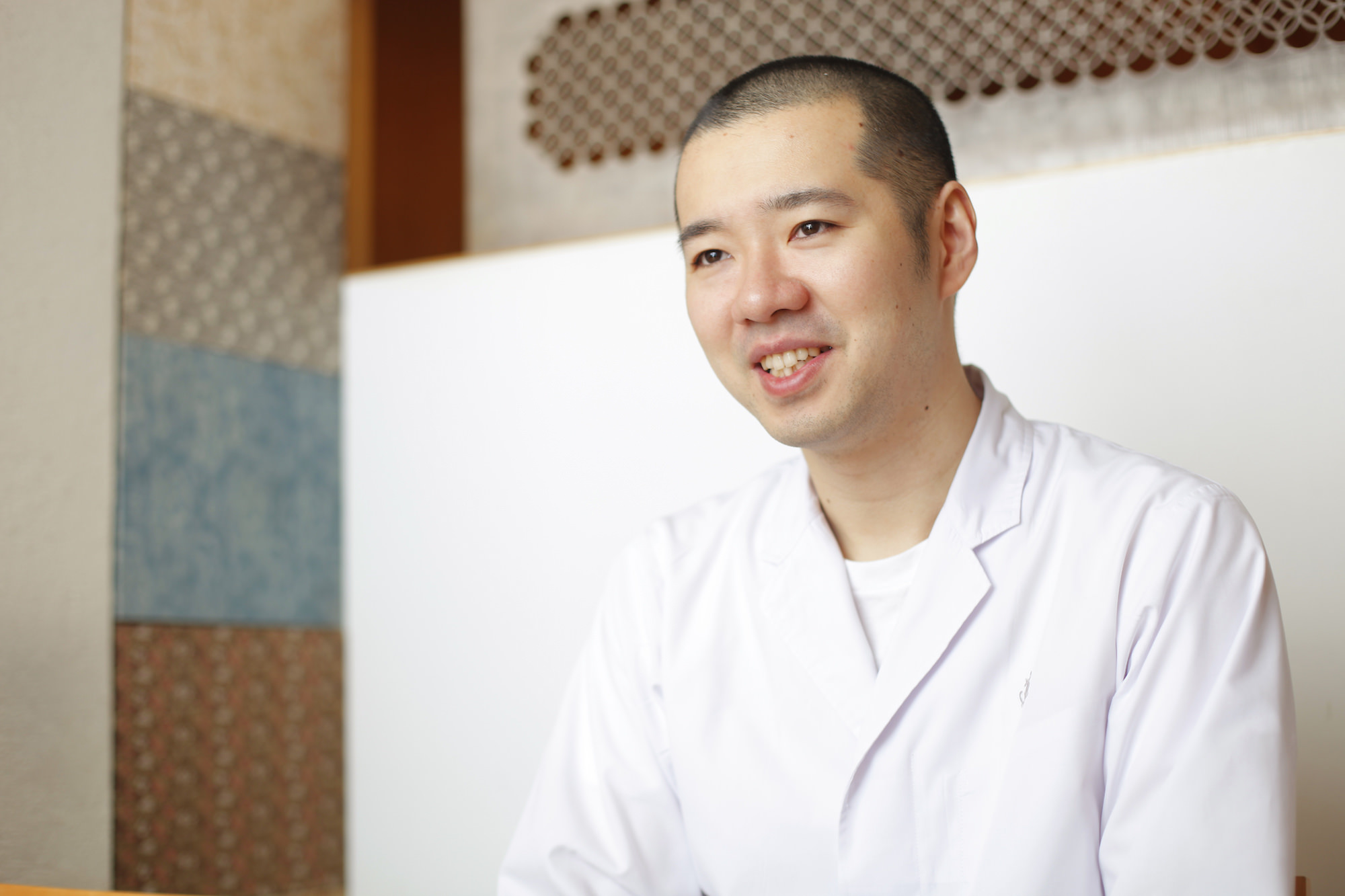 Being told “don’t do Japanese food because it’s hard” actually fueled his will to succeed instead.

Mr. Mishina:
I was interested in cooking every since I can remember. I was already thinking, “I want to become a chef,” when I was in elementary school. My mother liked to cook, so I must have been influenced by that. I frequently made desserts as well. Like pound cakes with bananas and vegetables…

Very healthy choice for a dessert made by a child.

Mr. Mishina:
I got a kidney disease during primary grades of elementary school. As such, I had to be conscious of salt and sugar levels until I was in high school. Instead of deliciousness, I was constantly worried about the salt and sugar levels in foods. I hardly ate stimulating foods until I was in high school, which I believe naturally made my tongue and olfaction more sensitive. I did not notice this at all until I entered the food industry, but when I was flavoring food as a Nikata chef, I felt that my childhood experiences are being utilized.

It must have been difficult with your illness, but you ended up being able to naturally cultivate your tongue as a chef. Why did you choose Japanese cuisine, out of all other cuisines?

Mr. Mishina:
When I was in high school, I was interested in an Italian chef. I even had a part-time job in an Italian restaurant. Italian food was very popular at that time, and Italian chefs were often featured on TV shows, which I thought was really cool. Coincidentally, the parents of the person who looked after me at the Italian restaurant had a Japanese restaurant, and I had several opportunities to visit it. During these visits, I was taken by the dignified look of the chefs. While both Italian and French cuisines are amazing, I thought it would be greatly satisfying as a Japanese person, to be able to convey Japanese food as its culture. When I consulted my seniors about it, they said, “the world of Japanese cuisine is very difficult, so definitely avoid it.” Instead, this actually made me want to try it (LOL).

After graduating from high school, you enrolled at “Ecole Tsuji” in Kunitachi, Tokyo, right?

Mr. Mishina:
Yes. After learning the basics in Tokyo for a year, I started at Tsuji Culinary Institute in Osaka. I wanted to study a bit more, and I also wanted some time to think, as I was not set on what to do after I graduate. The second year in Osaka consisted of practical training in a real restaurant style setting. There were 2 classes of 40 students each in my year, and one of the classes made the food while the other one tasted it. This was very hard.

We were assigned to stations such as Nikata, grill, and fry, and asked to create 3 courses. In addition to having to create dishes for 40 people, the menu was vastly different between each course. I got very confused, and was always being reprimanded. The instructors had a realistic tone of voice, and I was well prepared (LOL). 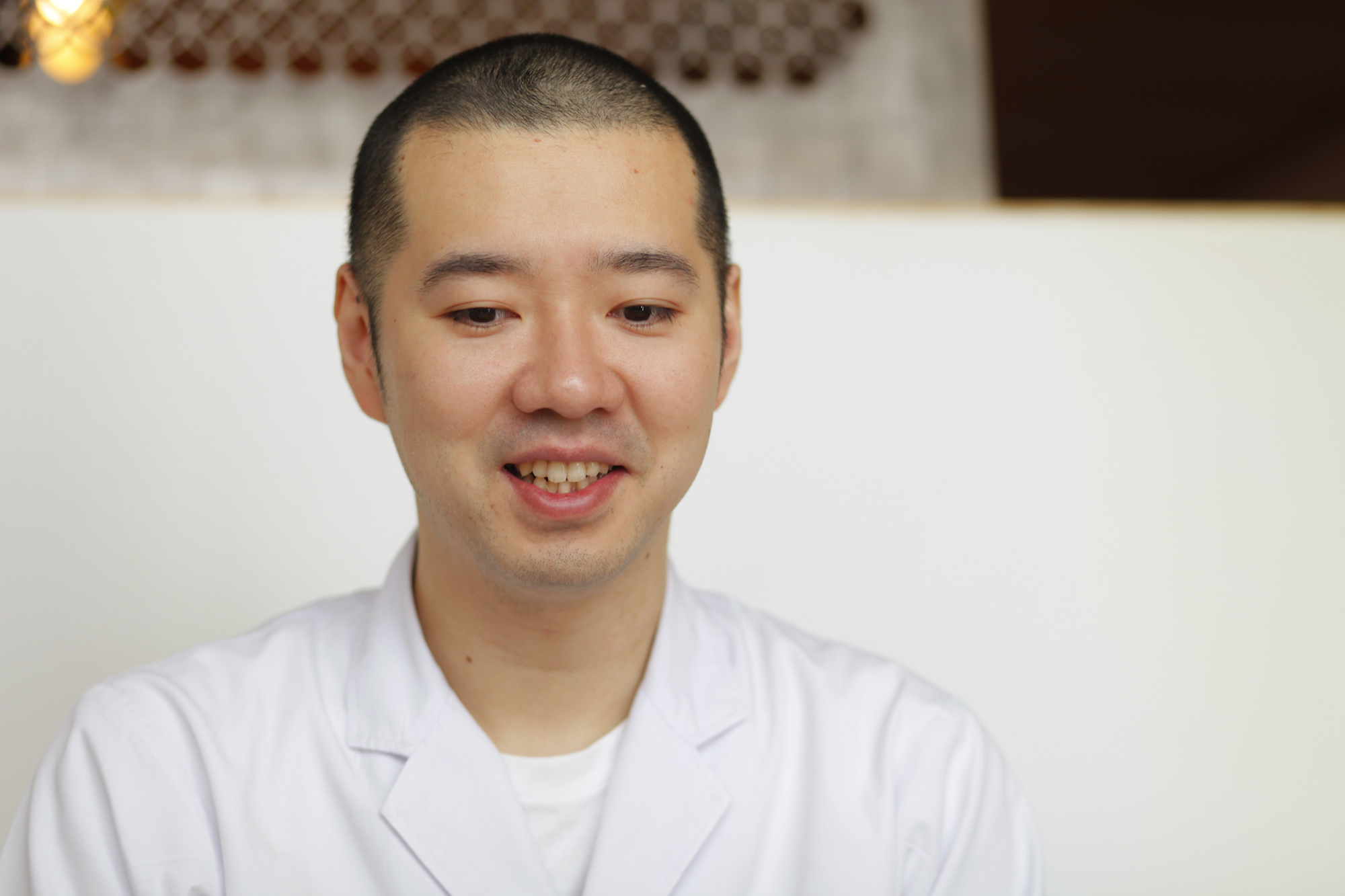 I decided to “persevere for 3 years” and went to “Ishikawa.” At first, I was crying every day.

You finally started training after graduating from the culinary school?

Mr. Mishina:
Actually, I initially hoped to become an instructor and stayed at the culinary school and worked as an assistant for a year. During this time I learned that what students really wanted to know was practical knowledge from the actual experiences in restaurant kitchens. In order to give convincing lectures, I thought I should also have a training experience. To this end, I returned to Tokyo, and began working part-time at a Japanese restaurant. In all honesty, I was planning to return to classrooms after I worked for about 5 years.

I see. How was the training?

Mr. Mishina:
I was young and inexperienced, and having never been a part of sports club teams, I had a difficult time getting used to the athlete-type atmosphere. I worried that I will not be able to survive in the world of Japanese cuisine, and ended up quitting the restaurant. While I was looking for a more casual place to work, the executive chef at the first restaurant contacted me saying, “someone quit at a restaurant called “Ishikawa” in Kagurazaka, why don’t you try working there?”. It turned out that this executive chef and Oyassan (the owner of “Ishikawa,” Mr. Hideki Ishikawa) were teacher and student.

Even though you were looking to work at a casual restaurant, you began training at “Ishikawa.” Why?

Mr. Mishina:
My teacher from the culinary school recommended me for the first restaurant, and everyone at the restaurant treated me very well. For these reasons, I was feeling badly about quitting and seeming ungrateful. On top of that, the executive chef was worrying about my next job, which made me want to respond to his thoughtfulness. I was worried if I could actually do it, but the executive chef gave me a push by saying, “just try it for 3 years.”

Was the training at “Ishikawa” hard?

Mr. Mishina:
I shaved my head for the first time, and began working with a fresh mindset. While I had the will, my body could not physically keep up. Initially, I kept getting yelled at, and I thought about quitting every day.

Even then, why didn’t you quit?

Mr. Mishina:
I had a sense of mission, like “if I can’t stick it out for 3 years here, I may not be able to make anything work.” Eventually, I got scolded less and less, and after about a year and a half, I was permitted to do the job of Nikata. Around this time, my world changed a bit. It was indeed satisfying to serve my own creations to the customers, and my desire to pursue Japanese cuisine in a restaurant became stronger.

Nikata is a position generally given to a person with certain amount of training. Getting the Nikata position after merely a year and a half is amazing.

Mr. Mishina:
Oyassan, who gave me the chance, and my fellow apprentice, Mr. Koizumi (the owner of “Kohaku,” Mr. Koji Koizumi), are the amazing ones. They both greatly value training personnel. They do not teach meticulously, but instead they offer opportunities for the trainees to test their skills. When I was presented with opportunities, I naturally started thinking about what needs to be done to fulfill my role. Since it doesn’t end after I learn one thing, continuously arising tasks were hard, but ultimately, I think this made me grow faster. When I joined “Ishikawa,” there were only 3 chefs. It was fortunate for me, to be able to observe Oyassan and Mr. Koizumi uninterrupted. 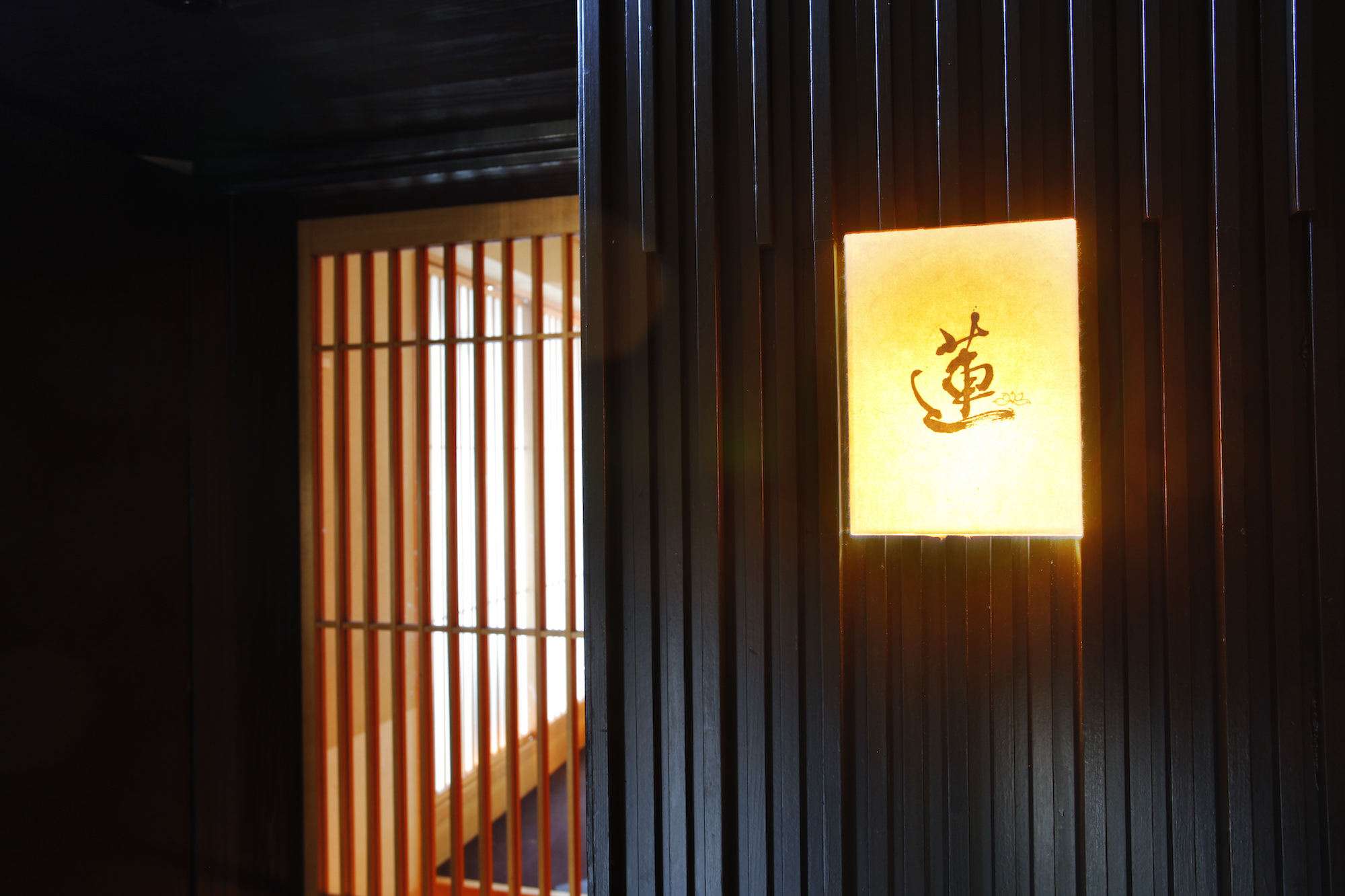