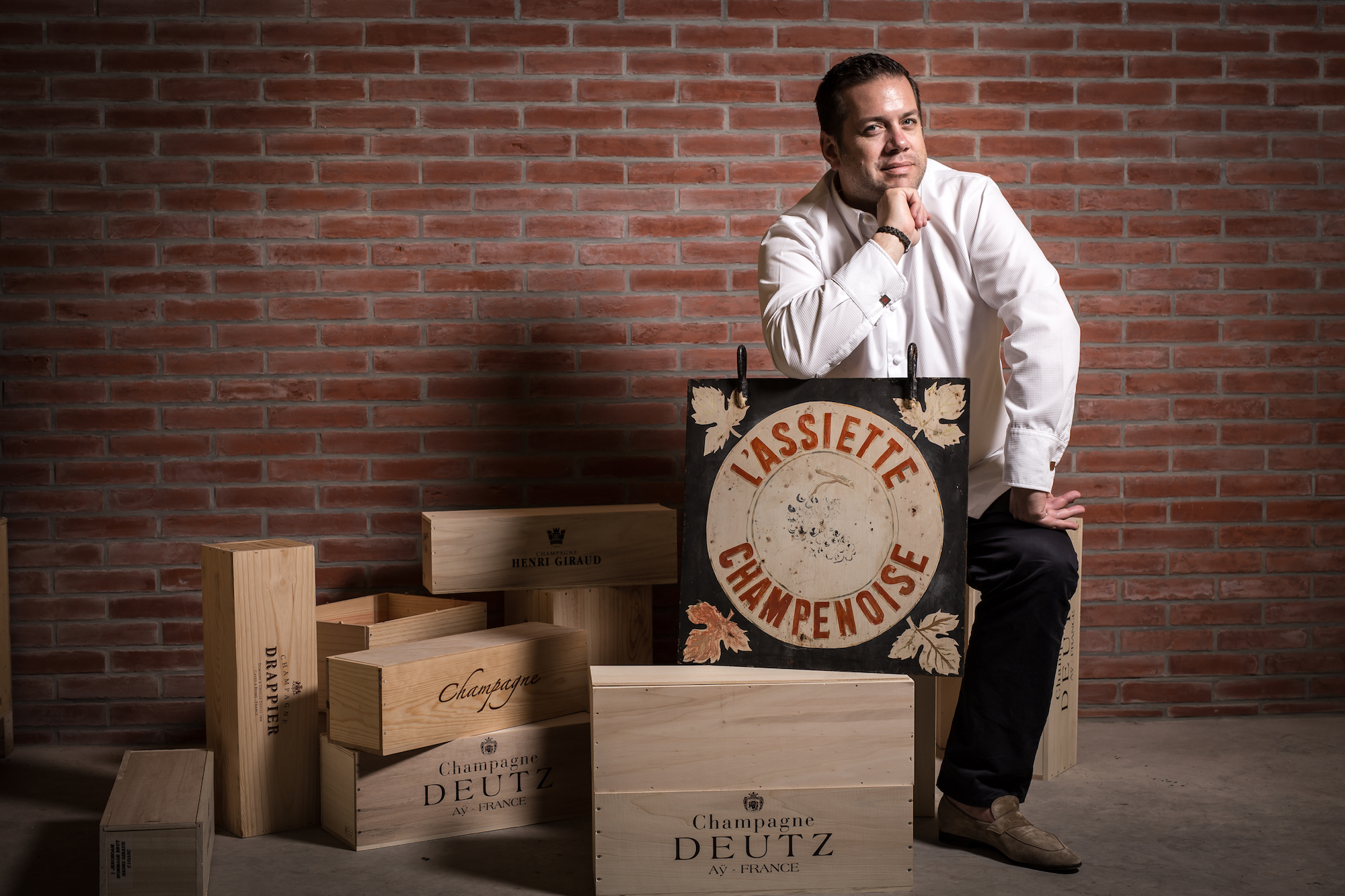 Born in Reims in 1975. After the untimely demise of his father in 2002, he inherited and maintained a traditional and formal auberge with his tight-knit family. The chef with a lot of love for Champagne has achieved a feat of acquiring three stars his restaurant in the auberge in his lifetime. 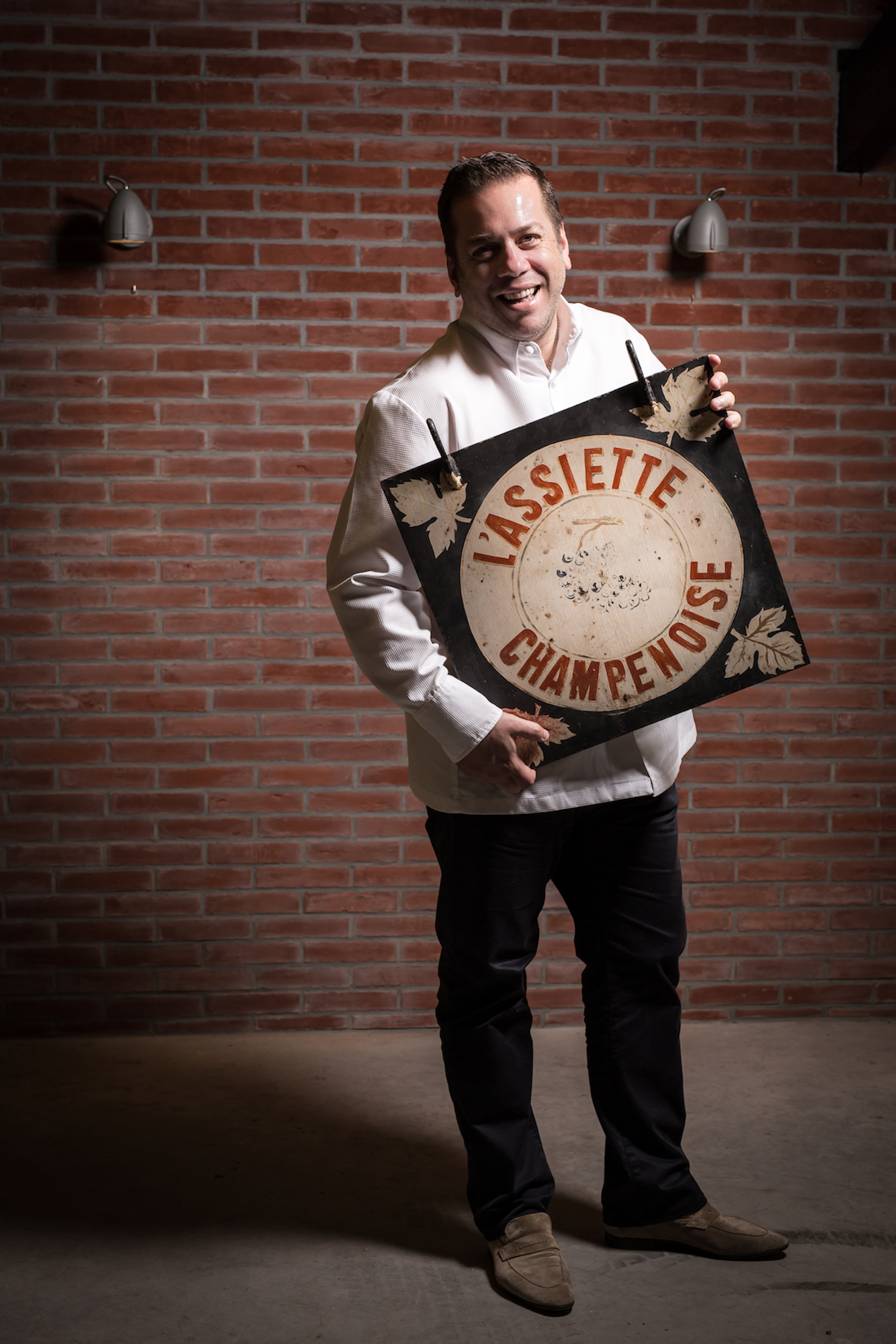 How did you decide the restaurants for the training? We guess that you were strongly influenced by your father.

Mr. Lallement :
It was in 1997 when I returned to this restaurant founded by my father in 1975 one year later of my birth. There is nothing to do with returning and father’s death at all. It was my own decision to become a chef and where to train, and there was not any interference from my father about my decision. It was my father who established a solid base for my career, but my father did not choose my future. He let me do what I wanted. In 2000, I took office as head chef at this restaurant. I became the responsible person for the entire maison in 2002 when my father died at the age of 50, but I had no idea that I would take over early. During my training days, I enjoyed opportunities to train with three great chefs, Roger Vergé, Michel Gérard and Alain Chapel. The reason why I trained studied under them was because I wanted to work in the three regions with the great chefs who respectively made different dishes and because I thought that understanding each chef’s approach was an important cooking practice.

What was your childhood like? Did you already decide to become a chef at that time?

Mr. Lallement :
My parents ran the restaurant ‘l’Assiette Champenoise’ in the outskirts of Reims before relocating to this place. According to my mother, I began to learn the words of the names of ingredients such as fish and vegetables before the words such as mom and daddy. Since we moved to Tinqueux in suburban area of Reims, I have heard everyone working in the kitchen from early in the morning because my bedroom was just above the kitchen. I learned how to ride a bicycle from regular customers who always came to the restaurant on Sundays because my parents were busy with the management of L’Assiette Champenoise. I learned words by consulting the Michelin Guide and Gault & Millau before I could read the letters. I decided to become a chef when I was 5 years old. It was natural consequence of the situation at that time. 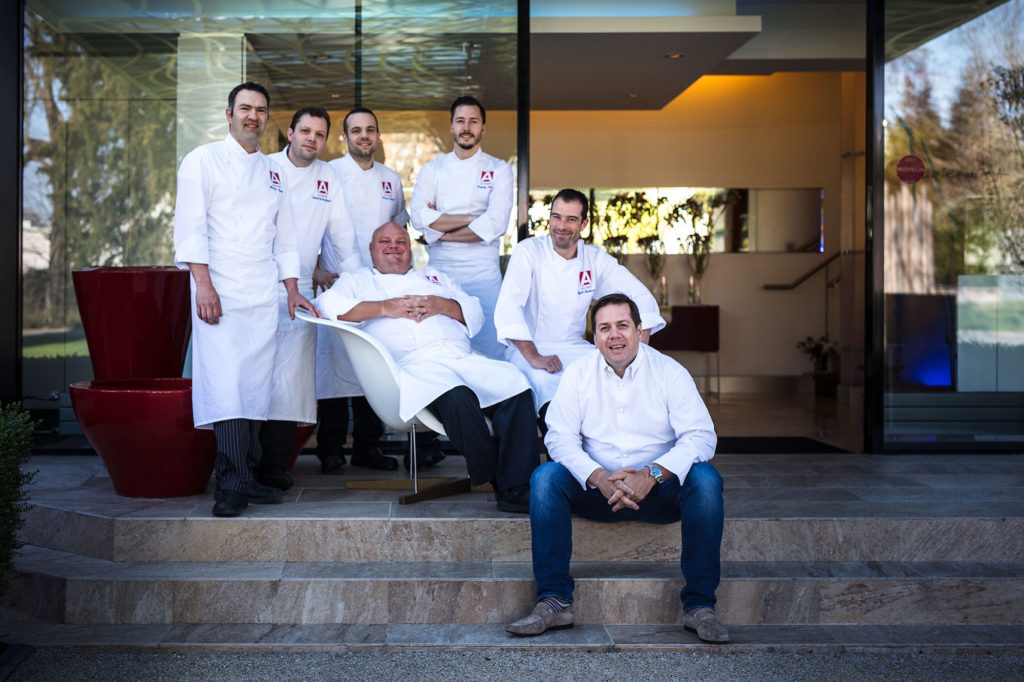 I have heard that your restaurant has always been family-run and that your wife and your sister are also active.

Mr. Lallement :
The aspect of family-run operation is extremely important for us to the point of our soul of this maison. When my father left this world at the young age of 50, my sister Mélanie was then 23 years old and my mother was in good condition. We regained lost one Michelin star in 2001 and then won two stars in 2005 and three stars in 2014. My wife and sister have worked together before we won three stars. I believe that we achieved three Michelin stars together with our team. There was a big change in the external environment after winning three stars. Some journalists who previously never tried to visit our place began to come suddenly just after the acquisition of Michelin stars. Although we have received many proposals of projects from various people every day, we are not very interested in such things and we continue to operate as usual.

If you had neither been born here in Champagne nor become a cook, which career would you have chosen in your life?

Mr. Lallement :
Let me think… I had never thought of that before, but I think that I would have been a winemaker of Champagne if I were not a chef because I like vineyards very much. I sould actually say that I have never thought of other careers as I have poured all my energy into our L’Assiette Champenoise.

Your eldest son, Brice, was shortlisted for the cooking contest. What do you think of the future of your sons ?

Mr. Lallement :
It was good and that Brice chose a culinary career, but I feel strange. I have never got on Brice’s case about his future career at all. He decided his future by himself. I think that this was good. I will see how things go about the future of my sons, Brice and Mattéo. I will never meddle in their decision because they have to decide their future by themselves as I did. It is very important that they chose their culinary career by their own request. Life is not for fulfillment of the obligations but for living out our own life.

I do not believe that business succession is so difficult. My sons were born, raised in this place and know very well all of the things about L’Assiette Champenoise. This is the most important thing. Things like know-how will be acquired while working together. 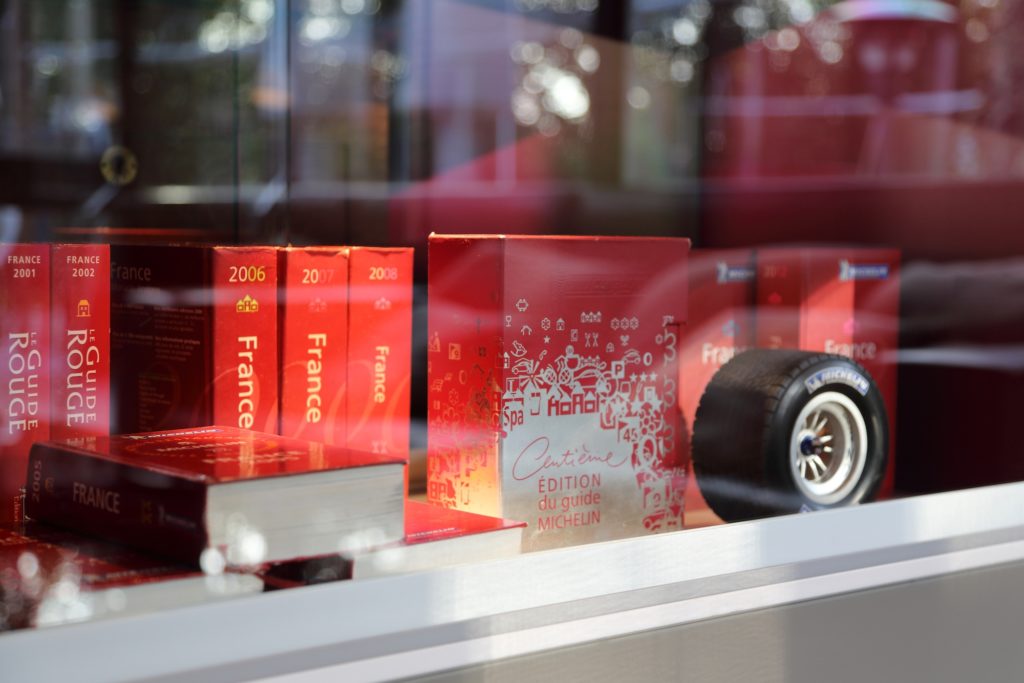 Mr. Lallement :
People nowadays are indifferent to food. For me, the idea of ‘eating real things’ is not limited to a gastronomic world but for our daily life. It is a simple idea that we go to the market, encounter artisans and find local products in order to eat fresh, delicious and comfortable things.

What do you think the change of the guests of gastronomic or of Michelin starred restaurants ?

Mr. Lallement :
The customers’ faces are still the same as before, but in fact customers have evolved with the march of time. Everything is always changing. Interests and concerns of the people have changed for forty years. We listen to different music and eat different things from thirty years ago.

This is perfectly natural. The gastronomic restaurants, without any relation to the number of Michelin stars, must never stay in the same place forever. We must not do the same thing as thirty years ago. The restaurants are constantly required to change with following the fashion of the day in order to respond flexibly to the needs and the expectations of the guests although we remain faithful to the basics that we serve delicious dishes to our guests. The restaurants must not stay at the same place forever.

Do you think that a gastronomic restaurant chef needs to stay in his/her kitchen all the time?

Mr. Lallement :
My place has always been in the kitchen. That is what my heart wants. I cannot imagine our kitchen without me as a lover of cooking although I perhaps should think about how to run our restaurant without me as a business owner. L’Assiette Champenoise has been a family-run hotel and restaurant. That contribute to create an atmosphere of the restaurant.

We are professional not only for the cooking but for setting the mood in order that guests can relax. My dishes are not cooked with a complex technique, but simple and delicious. I don’t know anything else that work up our emotions as much as gastronomy. I think that gastronomy is the shortest way to connect the fork and the brain.

Regarding the idea of pairings of champagnes and your dishes, how did you get this idea which did not exist during your father’s day?

Mr. Lallement :
Everything is different from my father’s day because of the gap of the generations and of the difference of the preference between me and my father. My direction of cooking has been slowly formed for a long time. I have found opportunities to visit champagne producers, to walk through the vineyards and to taste wines from barrels in order to understand the characteristics of the harvest year. The taste of wines of all  producers I tasted every year and the change across the aging remain deep in my memory.

When I wake up, I observe the vineyards every morning from my house right beside vineyard. It is very natural for me to get the idea of parings of champagnes and my dishes because I was born and raised in Champagne and walked around the vineyards when I was child.

What kind of food culture in the region of Champagne is there?

Mr. Lallement :
We have a characteristic food culture of the region which has developed with the great culture of Champagne. When I am out of the kitchen, I visit winemakers and their vineyards because I love Champagne. This is a source of inspirations for my cooking. 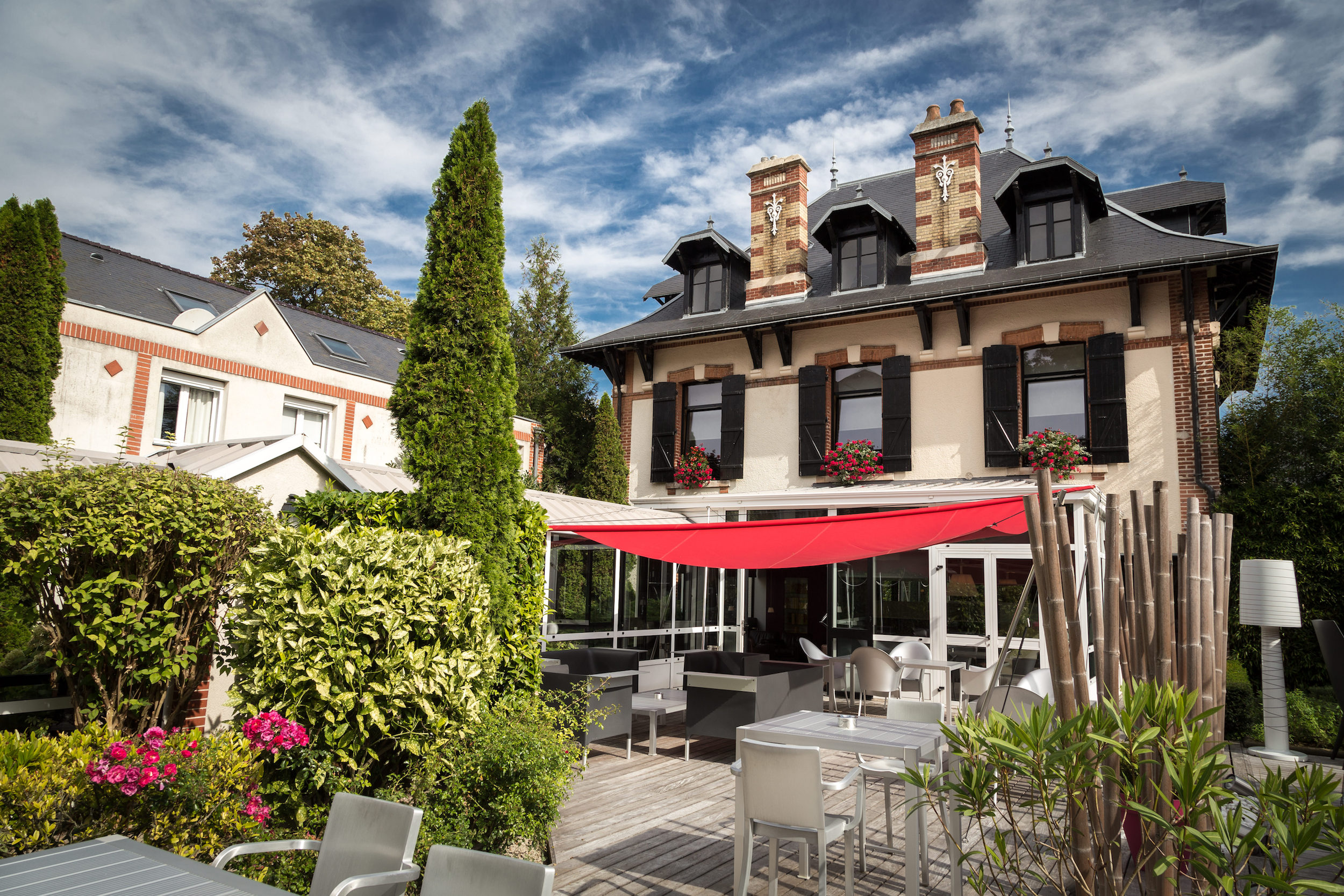