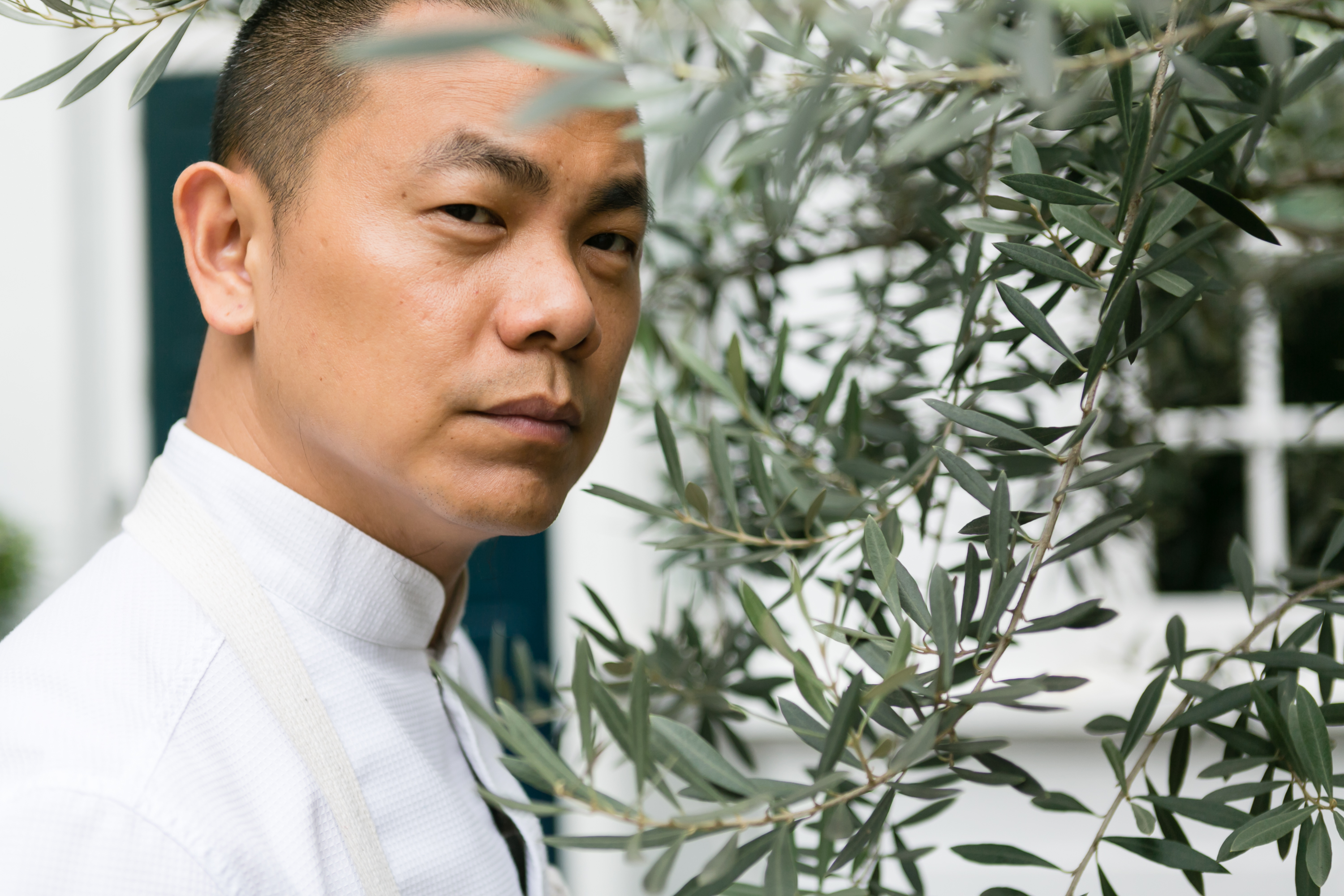 Named No2 in Asia's Best restaurant in 2017 and gained 2 stars from Michelin Singapore two years in a row, Modern French, “Andre” is the restaurant that is attracting the world’s attention right now. The place Chef Andre says, “The restaurant expresses myself”, is in a building which was renovated from traditional shop houses in Singapore.
It has white walls that seem like they match the sunlight of the south of France and olive trees growing stems freely which were brought all the way from France.
All customers are guided to the dining area after walking through the lively kitchen lead by Chef Andre. Inside, based on white is simple indeed. However, it does not appear boring, but the reason why it has a strong impression is perhaps that you can feel a sense of beauty all around, that pays attention to the placements of small objects even for ones placed millimeters aside the window.
“Andre” celebrating its 7th anniversary in October, 2017, closed on February 14th, 2018 at the peak of its popularity. I took a chance to hear from Chef Andre about the path to now and the future that he plans. 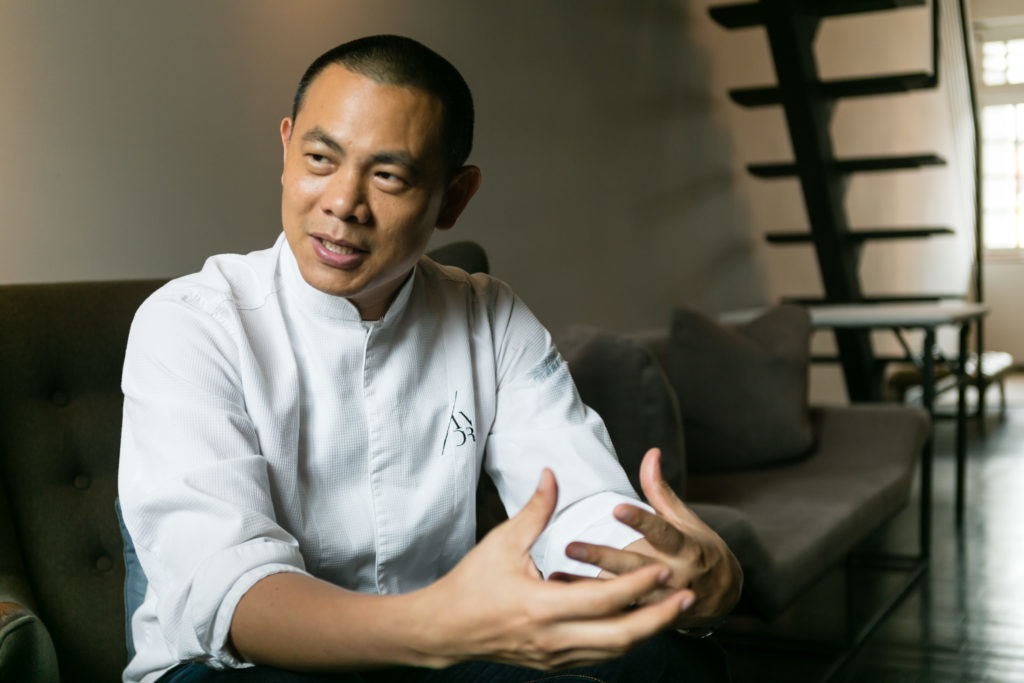 I expected to become a chef from when I was born

Please tell me about the chance for you to enter the field of cooking.

Mr. Andre:
My mom had been a Chinese cuisine chef for a long time. I was the youngest child and was 7 years younger than my closest brother. My brother and sister had no interest in cooking, so my mom decided that I would become a chef when I was born.

So as far back as I can remember, I was in the kitchen helping my mom. The memory of the first dish I made, I brought and stood on a child’s chair and cooked because I could not reach the gas stove. I cooked eggs and fried rice.

So special education for the gifted had begun already! Chef Andre is from Taiwan and you are going to return to Taiwan after closing the restaurant, but are there any fun memories of the food in Taiwan?

Mr. Andre:
My family had lived right next to the Shilin night market of Taiwan for three generations, and I, who loved the night market, used to get off the bus just before my house and walk around night market on the way back from school.

They sold jeans, sneakers, and moreover various street food. It was one of my favorite things to do on the way back home to buy some food to eat, so it often happened that by the time I got home I was already full. 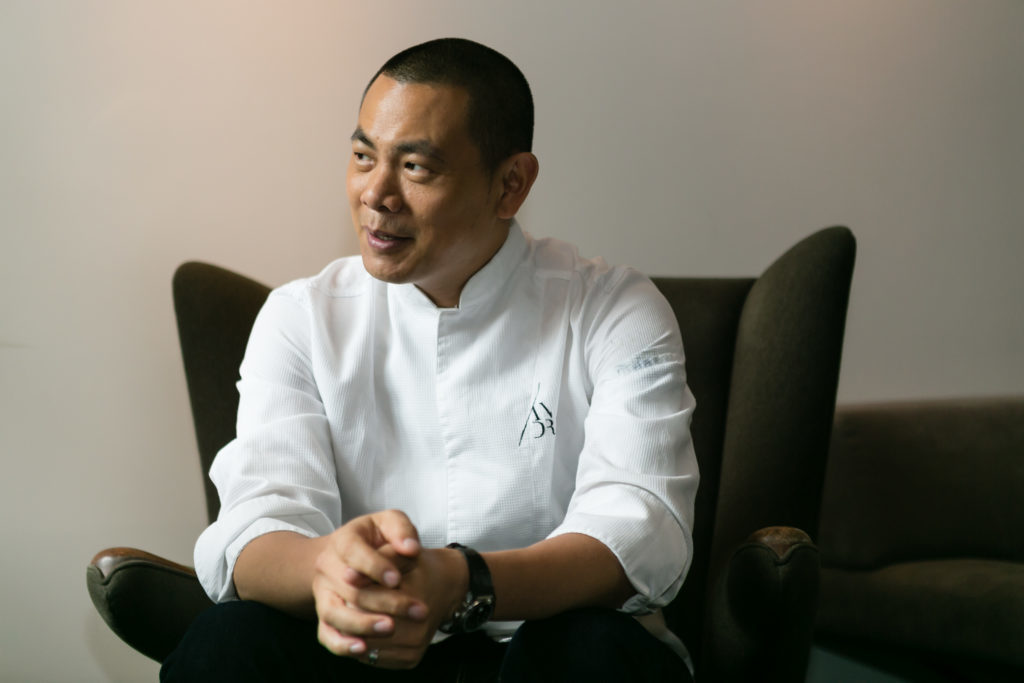 Things I learned in Japan when I was a boy. Meeting with “Iron Chefs”

I heard that you had lived in Japan.

Mr. Andre:
My mom went back and forth between Japan and Taiwan to help her friend at their restaurant around the same time I was born.

And when I was 13 years old, I came to Japan for the first time when my mom came to help at restaurant in Kofu, Yamanashi. My mom had decided that I become a chef and I was also thinking the same thing.

I did not understand a word of Japanese but as I went to school there and played soccer with friends, I naturally learned it. It was an age that absorbs many things so I was able to read and write after 2 years. So there are many Japanese cooking books on my bookshelf.

Were there any differences between cooking in Japan and Taiwan?

Mr. Andre:
Well, first of all, I was surprised by the variety of ingredients in Japan.
A Japanese egg supplier came to my mother’s restaurant and showed a sample of seven yolks in which the color of the egg yolk gradually differed. It was very impressive to be able to pick your favorite color. I was surprised by the numerous varieties in what had only been an “egg” to me.

Having lived in Japan, did it have any influence on your cooking?

Mr. Andre:
Of course. There was a shocking encounter that changed the way of thinking towards cooking in Japan. It was “Iron Chef”, which was the first cooking program that I ever saw.

My mom taught me many things about Chinese cuisine techniques such as how to cut vegetables and meat to a certain size, but that was just the style.

As I watched this program, I noticed that being a chef is a creative profession.
I loved many chefs like Hiroyuki Sakai, Kenichi Ching, and Rokusaburo Michiba.

I loved doing artistic things like pottery. My father was an artistic type who feels passionate about Chinese calligraphy and retired from a texture company. I think I have similar genes to him.

And the thing I learned the most in Japan was the potential of materials.
Chinese cuisine is to add flavors with techniques, but Japanese cuisine has a mindset of subtraction like not using sauce or dips if there is no need, which became a base of my cuisine. For example, Sushi is simple and it is my favorite cuisine. 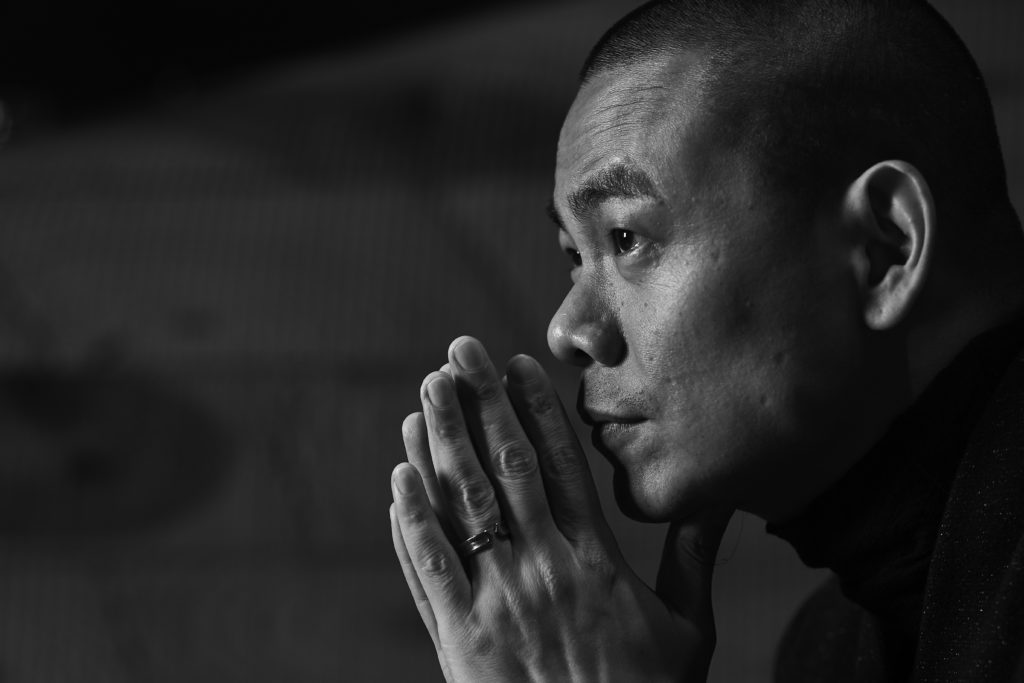