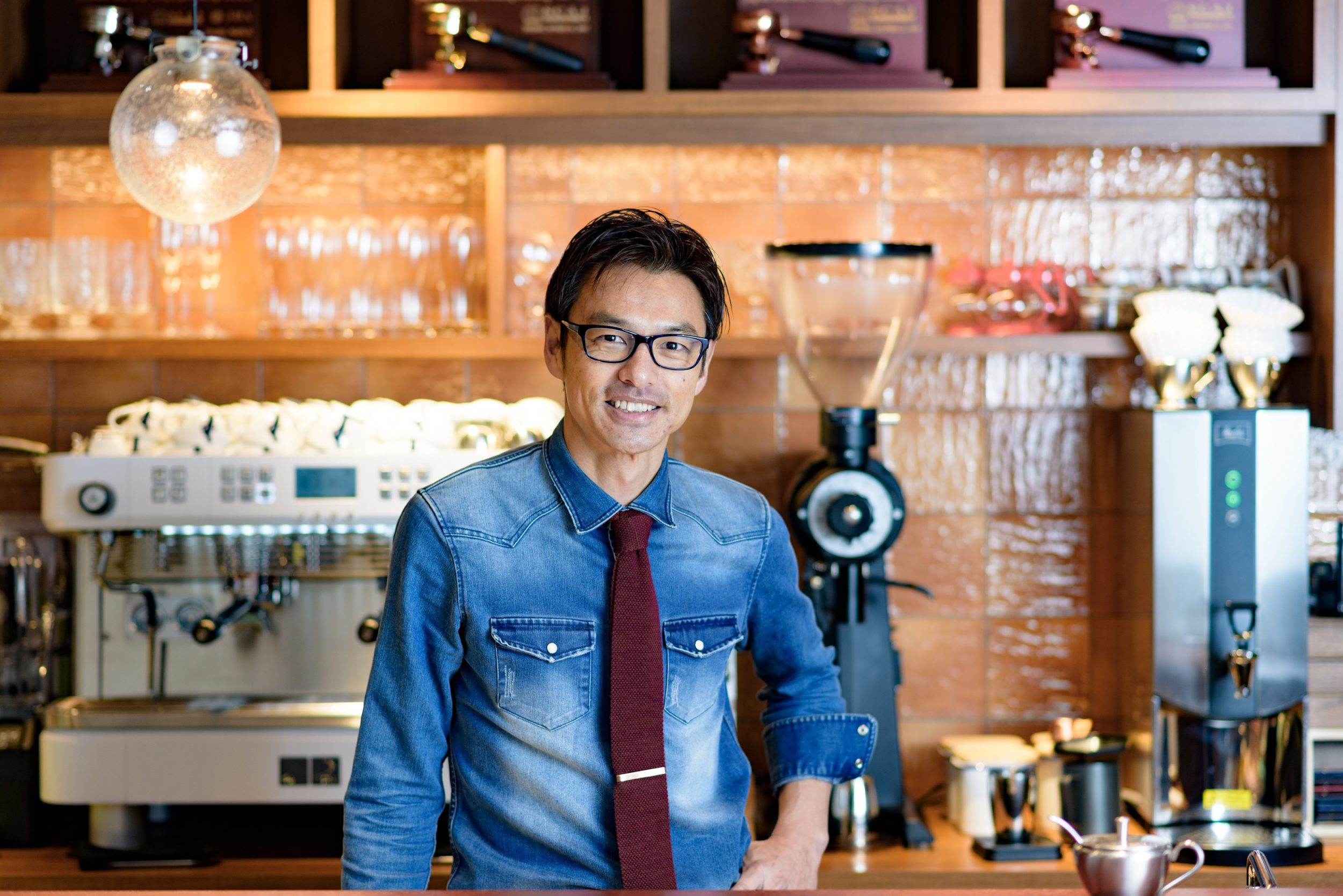 Winning the Japan Barista Championship of 2008-09 and being ranked third in the International Latte Art Competition, Mr. Okada has such a bright career. During his tenure at an old coffee roasting company, Ogawa Coffee, he appeared to many in the media as an advertising draw and was called the most famous barista in Japan. Okaffe Kyoto is the place that Mr. Okada left Ogawa Coffee for, opening it in the fall of 2016. In the small café, its area only about 50 square meters, Mr. Okada’s philosophy is fully evident. What is behind his philosophy of being not a barista but a “service man”? I took the opportunity to discover that true meaning. 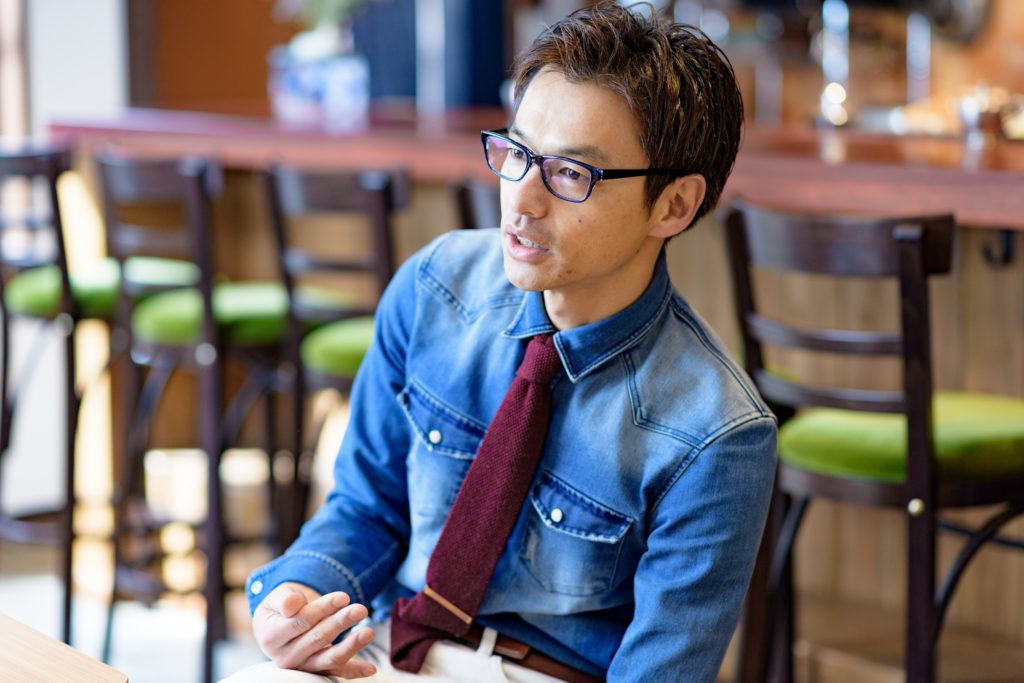 Meeting with Ogawa Coffee, which leads to the field of coffee.

What kind of a kid were you in your childhood?

Mr. Okada:
I was a stereotypical gang leader! I was the kind that said “I’ll become a baseball star.” You see the building next to here, from the window through the garden? (This interview took place inside of Okaffe Kyoto.)That white building is the elementary school I went to.

Actually, this is my neighborhood and it’s full of people who know me.I grew up in central Kyoto where Karasuma and Shijo Avenues cross.I was a taller kid and I was strong so I happened to be a leader of the gang.

I have an older brother and a younger one so I am in the middle. I liked to get attention, especially from girls. I was the captain and the fourth batter on my baseball team. On the volleyball team that I joined in junior high, I was a great attacker and a captain. I also was on student council.More than anything, I loved being in front of people. That hasn’t changed!

How did you choose your schools?

Mr. Okada:
I graduated high school and I was working part-time at a bar and restaurant.Back then I wasn’t thinking too much about it, but that experience influenced my life.

When I turned 20, my father told me to take over his business. He was a sole proprietor of a manufacturing business for kimono fabrics, and business was going well because of the bubble economy. One of us three needed to take over the business and I was chosen for having the best communication skills. At first, in order to see more of the industry, I was apprenticed to a kimono fabric shop in Muromachi, Kyoto. It handled quality goods. My father begged the owner to train me for five years, and I was welcomed there.

So it was a smooth transition into society.

Mr. Okada:
That industry was healthy at the beginning, but the effects of Japan’s burst economic bubble became more and more apparent.

After the five years were up, the insinuation toward people like me throughout the industry was essential, “Get out and don’t come back.” The company that employed me was still fine since it was a big one, thought. And at that time I was at a certain level in my career, so the president told me to stay. But the effect of the economy was bigger than we thought and after several years the company closed its doors.

How old were you when that happened?

Mr. Okada:
I was 30. I started when I was 20, so I was in the kimono fabric industry for ten years.Then I jumped into the restaurant business and decided to become a barista, but it was such a late start. 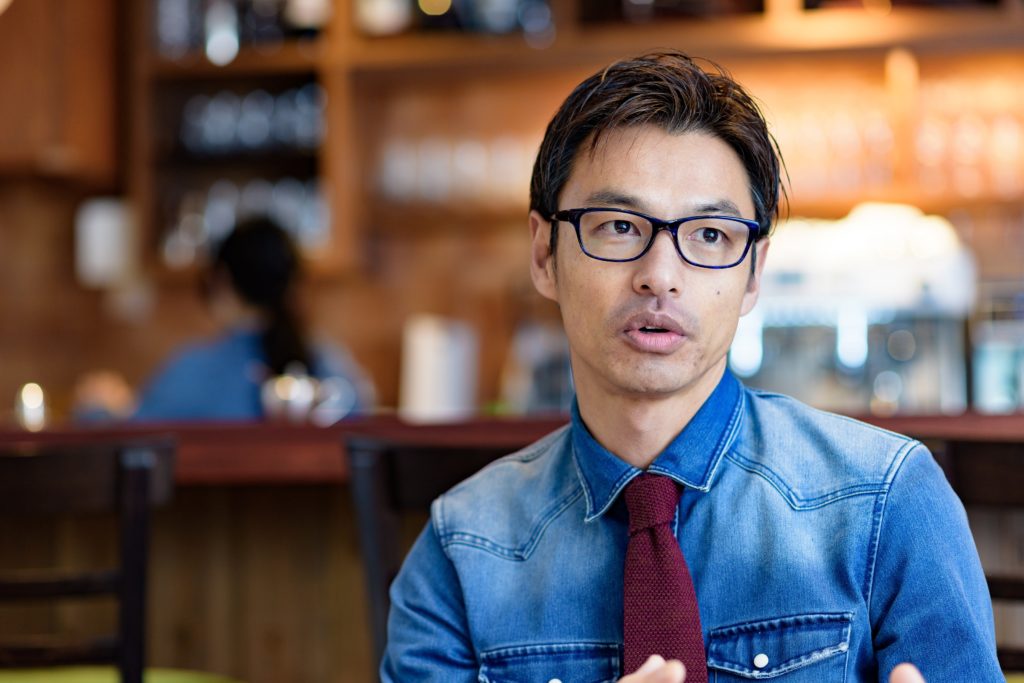 At that time there was a fateful encounter with Ogawa Coffee.

Mr. Okada:
I was thinking about what to do for my next job, and something in the service industry was what came to mind first.I thought I could utilize my communication skills in a job where I work with people.

Actually, my grandmother used to manage a coffee shop.My mother also worked there, so she was good at cooking coffee shop foods.She always made sandwiches and coffee on Sunday mornings.I was therefore pretty familiar with cafes and coffee. With that in mind I talked to a friend who worked in the café industry. He said if I would work in Kyoto in the future, there were two choices: Ogawa Coffee and Inoda Coffee.

Both are old roaster companies. Following his advice I visited Ogawa Coffee and Inoda Coffee shops all around Kyoto. While I was doing that, I happened to find a job advertisement asking for opening staff. Ogawa Coffee’s flagship location had been renovated and the advertisement was posted outside. I called immediately and started a part-time job there in January of 2002.

Mr. Okada:
It was 800 yen per hour, I think. I was already 31 years old and married so I think my wife was worried. But she said, “Keep trying until you find what you want to do.” She supported me. I have nothing but appreciation. I was even registered as her dependent for a short time.

So did you struggle at the beginning?

Mr. Okada:
Honestly, it wasn’t that tough. The flagship location is a big shop with about 100 seats and the staff consisted of many students, part-timers, and female staff, so I thought that I’d be the top server there.

Out of all the part-time workers I was the oldest, and combined with outside job experience I found it easy to handle the rest of the staff. When I was working at that shop, I noticed industry journals and magazines, and I heard the word “barista” for the first time.

At that time in Tokyo cafes were really taking off, and words like “espresso” and “barista” started to gain attention. But they weren’t yet known in Kyoto, so there weren’t many shops serving cappuccino like there are now. Internationally speaking, there is the job title “barista” and there are competitions to recognize the best in Japan or in the world. I thought I should set my sights on that. 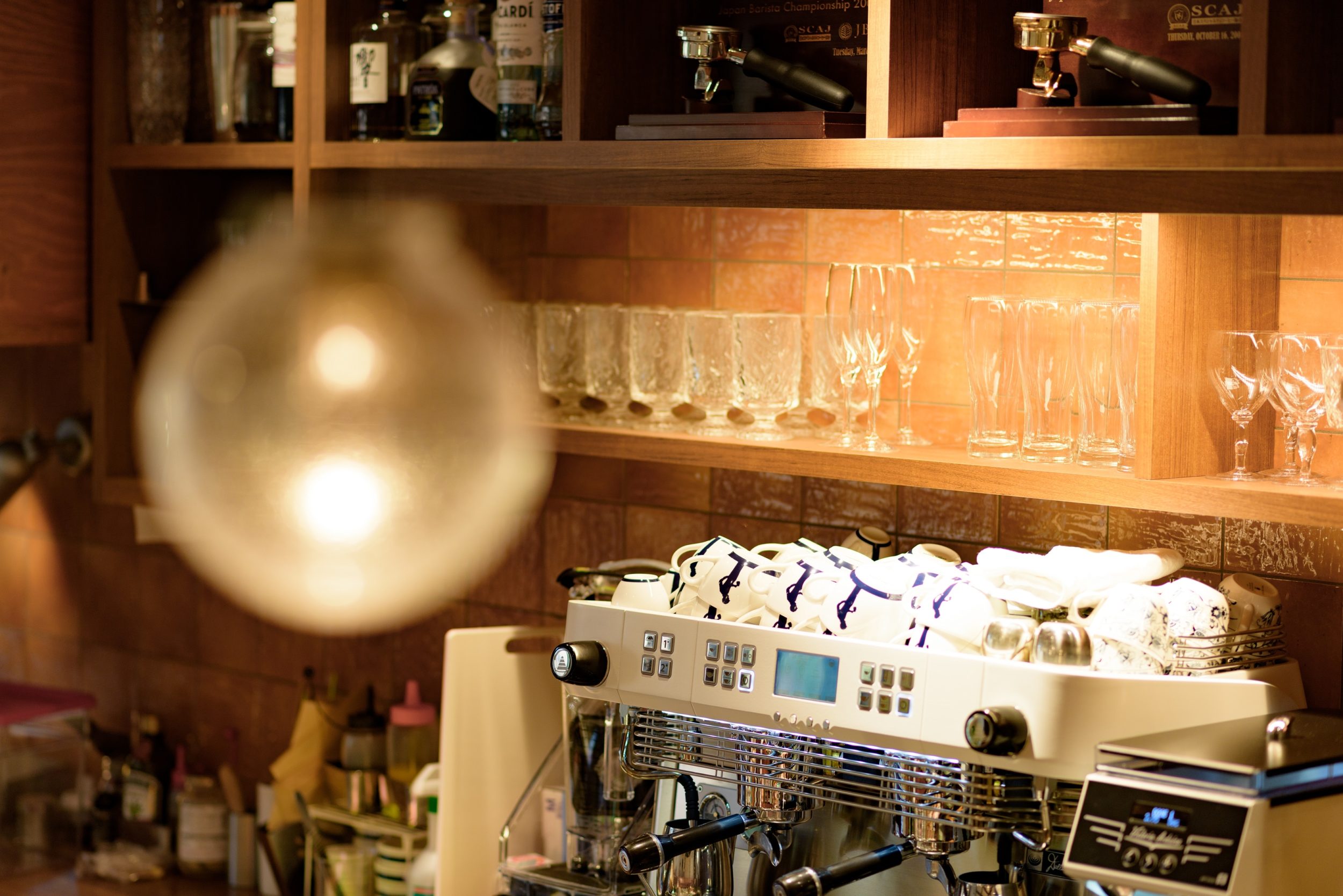